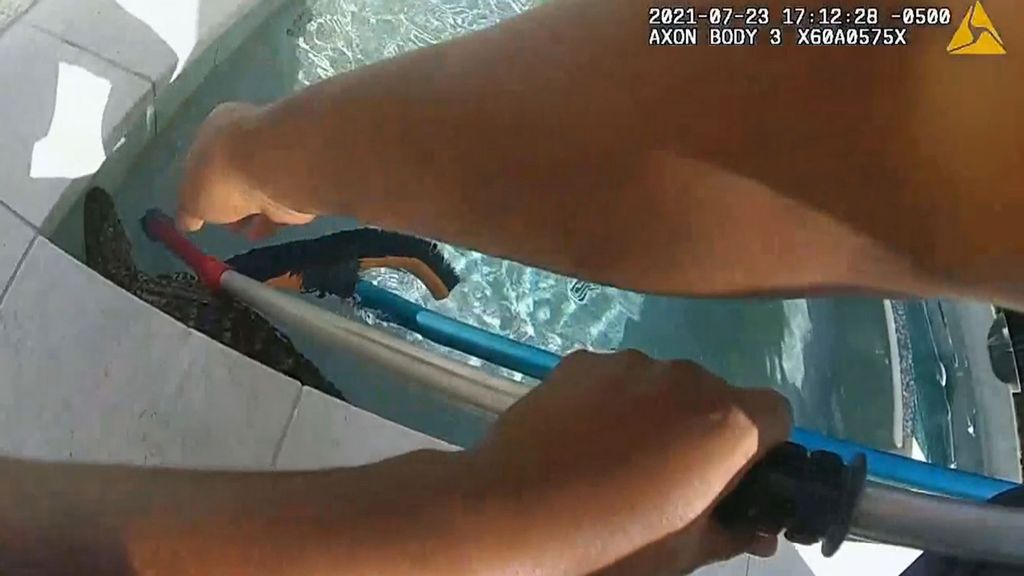 Police officers were called to respond to a small alligator hanging out in a woman's pool in Fulshear, Texas. (@FulshearPolice/Zenger)

Texas police rescued a baby alligator relaxing in a woman’s hot tub in the city of Fulshear in Fort Bend County, Texas, and shared the body-camera footage on social media on Thursday.

The Fulshear Police Department was called to a woman’s house after she noticed a small alligator chilling out in the hot tub section of her private pool.

In the video, an officer is seen lifting the alligator out of the water with a pole after one or two failed attempts.

The officer carefully picks up the reptile and holds its mouth closed before referring to the reptile as “pretty” and deciding to name it “Emma.”

The video ends with the two officers preparing to place Emma in the back of a patrol car before releasing it into the wild.

“Your officers recently received a call in regard to a Criminal Trespass,” the police department joked in the social media caption. “An unknown suspect had entered a homeowner’s backyard and decided to go for a swim in their hot tub.”

“Officers Chavez and Landry quickly made the scene and observed the suspect swimming naked without regard to the owner’s wishes,” the statement said. “The suspect resisted at first but was soon arrested and later released without further incident.”

Besides the most recent baby alligator, Fulshear police have captured several other alligators in recent months.

On May 20, officers captured an alligator sunbathing near a residential home and relocated the creature to a nearby lake.

Just a few weeks later, on June 9, the police department found an eight-foot-long alligator roaming through a Fulshear neighborhood and had to call for backup.

According to the police department, the alligator required five officers to pull it back into the pond across the street.

While many Texans live in close proximity to alligators with no confrontations, some alligators can become a nuisance when they establish territories around people, and must be handled by the proper authorities, according to the Texas Parks and Wildlife Department.

While alligators were considered endangered from 1967 to 1987, today their range extends east to the Carolinas, west to Texas and north to Arkansas. The wildlife department says that because the creatures have been known to prey on pets and can be surprisingly quick on land, they must be treated with caution.

The department says learning to recognize the few nuisance alligators and coexist safely with the majority of alligators that are not nuisances will help when these situations occur.