Not So Quackers: Goose Flying Upside Down Is Simply Showing Off, Say Experts 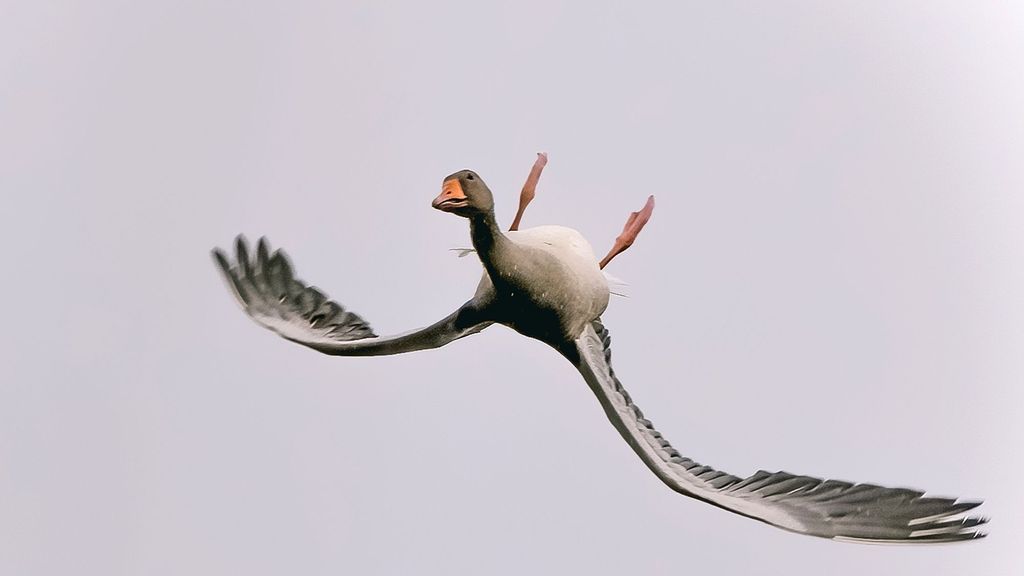 A bean goose flying upside down, as captured by Vincent Cornelissen, an amateur photographer. (@b0unce1971/Zenger)

A dark gray-brown Bean goose flying upside down was snapped by an amateur photographer near the Dutch town of Arnhem.

The maneuver, called whiffling, is when geese roll their body upside down and twist their neck and head 180 degrees around to its normal position.

This aerial acrobatic resembles a falling leaf and may be used to avoid avian predators or a long, slow descent over an area where hunters for sport or food are present.

While the photo was taken earlier this year, it has since sparked heated debate as to why geese do this. Photographer Vincent Cornelissen said he got thousands of messages and comments from people around the world asking for information about the goose flying upside down. Cornelissen shared the photo on his Facebook page for bird lovers and caught the attention of academics and more than 10,000 followers.

“There was even a professor from Istanbul University who edited my photo with arrows to teach his students about aerodynamics,“ he said.

Vincent has been fascinated with photography since he was a kid and said that even before this famous snap, taking challenging photographs of birds was a passion.

“I always say that to find a bird and photograph it in a special way is incredibly satisfying and relaxing,” he said.

But this particular shot was especially challenging.

“The weather was bad, so I put on my waterproofs and sat with my back against a tree looking over a lake,” he said.

It was then that he saw three geese and noticed that one of them was behaving strangely.

“I saw that one of the three had trouble flying in a straight line. He was having a hard time which I thought was because of the wind. He seemed to be struggling, so I took some pictures of him.”

He didn’t think much more about it until he developed the pictures.

“I immediately realized that I had captured something special, but at the same time, I was afraid that no one would believe me. The image looked like it was edited in Photoshop.”

Indeed, he received some online feedback accusing him of posting a fake picture, even though upside-down flying is actually something that is known to occur.

“I got a message from a Dutchman who lives in Norway and knew this phenomenon. He lives next to a lake and regularly sees geese doing this. [I found that] there is even a name for it: a whiffling goose.”

“Once young geese have mastered flying, they start to see what is possible and how far they can go,” Soerink said.

But he also said it could just as easily be that “they do it to brag to their peers. Like, look at me!”

In some ways, it sounds like the bestselling book, “Jonathan Livingston Seagull,” whose title character strives to set himself apart by a flying differently from his peers — which results in him being outlawed but eventually becoming a revered and inspirational leader for his flock.

Cornelissen said other photographers had managed to capture the whiffling phenomenon, although he had not seen one that was as sharp as his own photo.

“We know that some geese do this,” Soerink said. “But it’s a matter of seconds, so photos of this phenomenon are rare. Certainly as sharp and good as this one. So all credit to the photographer.”

“I always look around and listen to all the sounds. Not only in nature, but also on the streets. Sometimes I give myself a goal for that day, for example, taking a picture in black and white with high shadow contrasts. I like to challenge myself,“ he said.

“Most of the time I use my own filters such as Lightroom Photoshop. I like the matte look in a picture. For bird photography, I often use Topaz DeNoise to erase grain and add some sharpness.”

But no matter how much skill a photographer brings to the job, Cornelissen said that a great snap sometimes just “depends on the day — weather conditions, my mood, and often a lot of luck and patience,” he said.