Mexico Holds Referendum To Decide Whether To ‘Prosecute’ Former Presidents 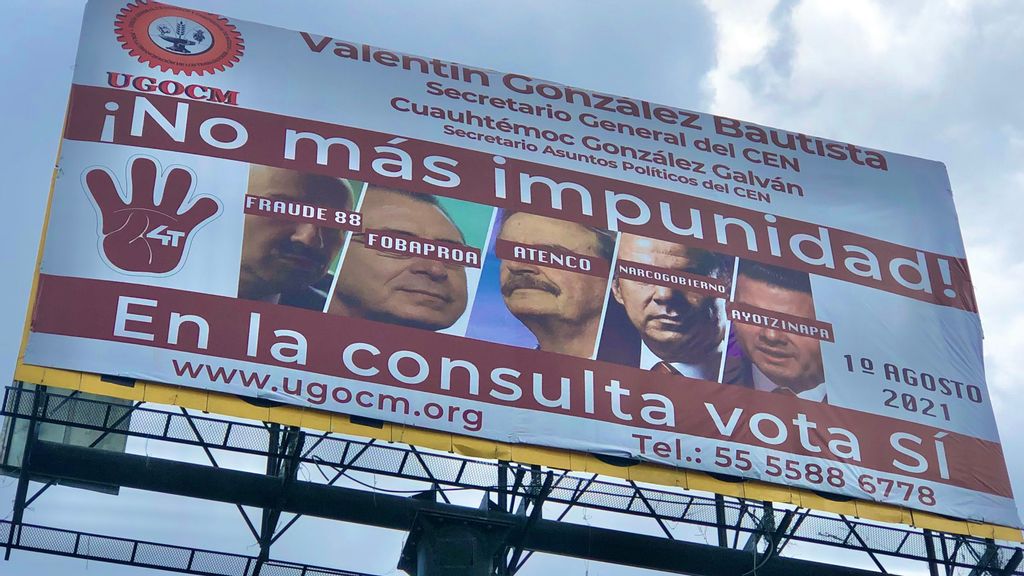 The referendum to decide whether to bring five former presidents to trial divides Mexican society. The process has no legal basis in Mexico, say experts. (Julio Guzmán/Zenger)

MEXICO CITY — An unprecedented event will take place in Mexico on Aug. 1. For the first time in the country’s history, citizens will decide in a national referendum whether past political decisions and actions should be investigated; 93 million Mexicans with valid voting IDs can show up at the polls.

The rules are simple. Citizens go to the polls and show their voting ID to an official, who will give them a ballot with the question, “Are you or are you not in favor of the pertinent actions being carried out — following the constitutional and legal framework — to bring light to political decisions that political actors made in the past years, in a process aimed at guaranteeing justice and [securing] potential victims’ rights?” Voters must reply “yes” or “no” and deposit their answers in a ballot box.

The process is simple, but the referendum’s promoters face a challenge: getting at least 40 percent of the citizens on the National Electoral Institute’s (INE) registration list to vote. This means that 37 million voters must participate for the process to be valid, according to article 35 of the Constitution and the Federal Law of Popular Consultations.

Mexican President Andrés Manuel López Obrador (AMLO) is one of the referendum’s main promoters. As part of his campaign promises, he pledged to eradicate corruption and has said he will not cast his ballot since he does not want his action to be read as an act of “revenge” against his predecessors.

The National Regeneration Movement (Morena), the party with which AMLO became president in 2018, has encouraged Mexicans to vote for putting ex-presidents on trial through billboards and other ads. But the INE issued a precautionary measure against Morena’s campaign.

The party’s “insertions can cause confusion and misinformation among citizens,” the institute said in a July 29 press release, explaining that Morena’s publicity does not reflect the upcoming referendum’s question.

The ads resemble instead the initial question that AMLO sent to the senate in August 2020: “Are you or are you not in favor of the authorities investigating and, where appropriate, punishing the alleged commission of crimes by former presidents Carlos Salinas de Gortari, Ernesto Zedillo Ponce de León, Vicente Fox Quesada, Felipe Calderón Hinojosa and Enrique Peña Nieto before, during and after their administrations, following the applicable laws and procedures?”

The question changed because the Supreme Court considered the majority’s opinion should not rule over the law, as it would violate the victims’ rights. The Supreme Court approved the final question on Oct. 18 by a vote of 6–5.

The upcoming referendum is not the first time that AMLO has called for popular opinion. Mexicans decided the future of the new international airport, which was being built in Texcoco, State of Mexico, in an unofficial ballot box at the beginning of his administration.

While he was Mexico City’s (then Federal District) Head of Government, he called for a plebiscite to decide whether to implement daylight saving time and increase the subway ticket price. He also asked the population if he should remain in office and if the Periférico (a main road in the metropolitan area) needed a second level.

Within days of the new plebiscite, Mexicans’ reactions are diverse.

“I am in favor of the referendum. I believe that Mexican society has just begun a political maturation process that entails [citizen] participation in issues that concern us all and in politics in general,” said Sergio Pablo Nicolás, an economics graduate who has used his social media platforms to encourage voter turnout.

“I think the query is pertinent. If all goes unpunished, there will never be accountability … If there is impunity, public officials can do whatever they want, and no one will complain. I believe the referendum will set a precedent,” said Victoria Macías, an accounting graduate.

Others have a different opinion.

“They are subjecting the fact of applying the law to a person’s will. The law is not at will,” said Víctor Morales, a law graduate. “AMLO has been accusing [the former administrations] of corruption since the campaign, saying he has evidence. How many complaints has he filed? Has he given any evidence to the attorney general? Neither. Does he have information to investigate or accuse someone of a crime? There must be an investigation. … If he already has the information, why not just give it to the prosecution? Why is he doing all this?”

Some parties have expressed their opinion.

Former presidents Calderón and Fox’s party, the PAN (National Action Party), posted on Twitter: “It is confirmed that Morena’s government commitment to fight corruption is pure propaganda and political persecution.”

Fox went even further, posting to his 1.4 million followers on Twitter, “Friends, let’s not indulge in this mockery. Let’s give them a total vacuum. No one should go vote on Aug. 1. We will judge them for throwing away our money.”

He criticized AMLO’s administration for “throwing away $25 million instead of paying for cancer medicines, vaccines [and] daycare centers.”

In contrast, Subcommander Galeano, the Zapatista Army of National Liberation’s leader, encouraged indigenous peoples to go to the polls and vote “thinking of the victims.” He suggested in a statement that those who do not wish to participate send a letter — individual or collective — to a victims’ organization stating that they “respect their pain and support them in their demands for truth and justice.”

Claiming to have adhered to “austerity” measures, the INE has allocated $26 million for the referendum, paying for 57,124 polling stations instead of the 104,000 planned initially. The polls will be open on Sunday, Aug. 1, from 8 a.m. to 6 p.m.

Voters can find their polling locations on the INE website.

The precincts will comply with sanitary measures to prevent the spread of COVID-19.