Chavismo has historically sought to associate with medalists and use them for political propaganda.
By Felipe Torres Gianvittorio July 30, 2021
Facebook
Twitter
Linkedin
Email 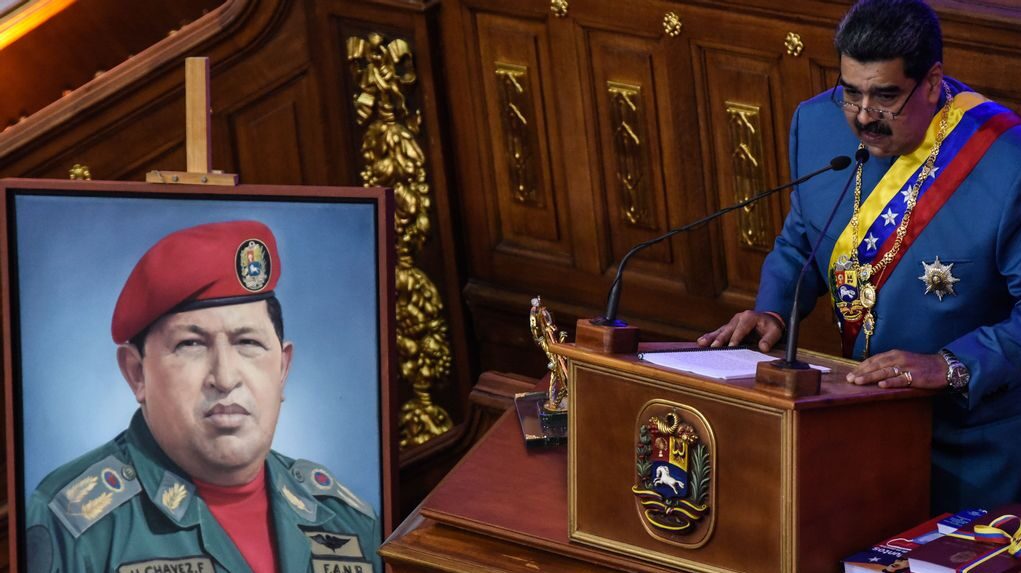 Hugo Chávez is the central figure of the political movement ‘Chavismo,’ named after him. In the photo: current President Nicolás Maduro speaks next to Chávez’s picture in January 2021. (Carolina Cabral/Getty Images)

CARACAS, Venezuela — Venezuela won its first medal at the Tokyo 2020 Olympic Games on Wednesday, July 28, when Julio Mayora claimed the silver medal in the 73 kg weightlifting category. But Mayora’s victory become a source of controversy among Venezuelans when he dedicated the medal to former President Hugo Chávez.

The Venezuelan left celebrates July 28, the birthday of Chávez (1954–2013), the central figure of the Chavismo political ideology. Mayora remembered this fact in a phone call with President Nicolás Maduro after receiving the medal.

“This silver medal is a gift for President Hugo Chávez,” said Mayora.

Due to the poor conditions in which some Venezuelan athletes arrived at the Olympic Games, this gesture represented a betrayal to some.

“Supporting a Chavista athlete like Julio Mayora is trivializing the suffering of his fellow Venezuelan colleagues, who, alongside athletes of Syria and Afghanistan, are part of the Refugee Olympic Team. People who, though exiled, strive to represent their natal countries in the Olympic Games,” said Adrián Jaimes, who opposes Maduro’s regime.

Though the athlete dedicated his medal to the former president, the discomfort in his gestures raised suspicions that Venezuela’s authorities were pressuring him into making the statement.

Víctor Amaya, a Venezuelan journalist, shared on Twitter the recording of a conversation between Mayora and Maduro in which he says some fragments were intentionally silenced.

The silver medal is Mayora’s most significant sporting success. The 24-year-old native of Catia La Mar, on the Venezuelan coast, has been preparing to be an Olympic weightlifter since he was nine years old.

Mayora’s family lives in Venezuela and, since he does not share the popularity of the other delegations’ athletes, his career depends mainly on sports federations and the Venezuela Olympic Committee, all of which suffer from interference from the state.

Due to the widespread criticism against Mayora’s statement, Daniel Dhers, an Olympic cyclist and one of the most recognized Venezuelan athletes, came out to support his compatriot.

“The Olympic games are a matter of joy for the countries of the world, regardless of their political inclination. So please, put that aside. … I know that many people will not agree with me. … People want to link his actions to politics, and that’s a bummer. But, no matter what, no one can deny that the kid loves his country and gained his silver medal in what may be the most challenging Olympic Games in history,” Dhers said on Instagram.

Some people argue that, since Dhers lives in the United States and has several sponsors due to his long career, he does not depend on the Venezuelan state and thus can speak openly without retaliation.

“If Daniel Dhers wins a medal, they won’t be able to pressure him into making a statement,” said Ramón Villa, a fan of both Venezuelan sports and the Olympic Games. “The man lives in the United States; he has no financial problems. He is a devoted sportsman. With Mayora, it’s different. His family does not even have a house. Sadly, due to how divided is Venezuelan society, many people do not understand that.”

Some people have also criticized the notion that the Venezuelan regime manipulated Mayora.

“Exposing Mayora as someone easily manipulable is not good,” said Wilson Guerrero, a Venezuelan sports fan. “At the end of the day, when listening to Mayora thanking or dedicating his triumph to Chávez, anyone can do one of three things: believe that he is being genuine or not, agree or deny that there is something to be thankful for; or believing that it is just a propaganda tool. Yet, among all those options, none of them considers that Mayora took a political stance due to his statements.”

Historically, Chavismo has tried to link up with Venezuela’s most internationally renowned athletes.

The most notorious example is that of fencer Rubén Limardo, who in London 2012 won the second gold medal in Venezuelan Olympic history. His feat was passed down in history because, upon returning to Venezuela, he attended a public ceremony where Hugo Chávez personally decorated him.

Limardo was even elected as a substitute deputy for the United Socialist Party of Venezuela in 2015, although he put his political career on hold in order to continue focusing on sports.

In November 2020, a photo of Limardo working as an Uber Eats delivery driver in Poland went viral. Later, in Tokyo 2020, he was eliminated in the first round.

The Venezuelan delegation in Tokyo 2020 comprises 43 athletes, the smallest delegation the Caribbean country has sent to an Olympic event since Sydney 2000. Another Venezuela athlete, boxer Eldric Sella, competed as a representative of the Olympic Refugee Team.