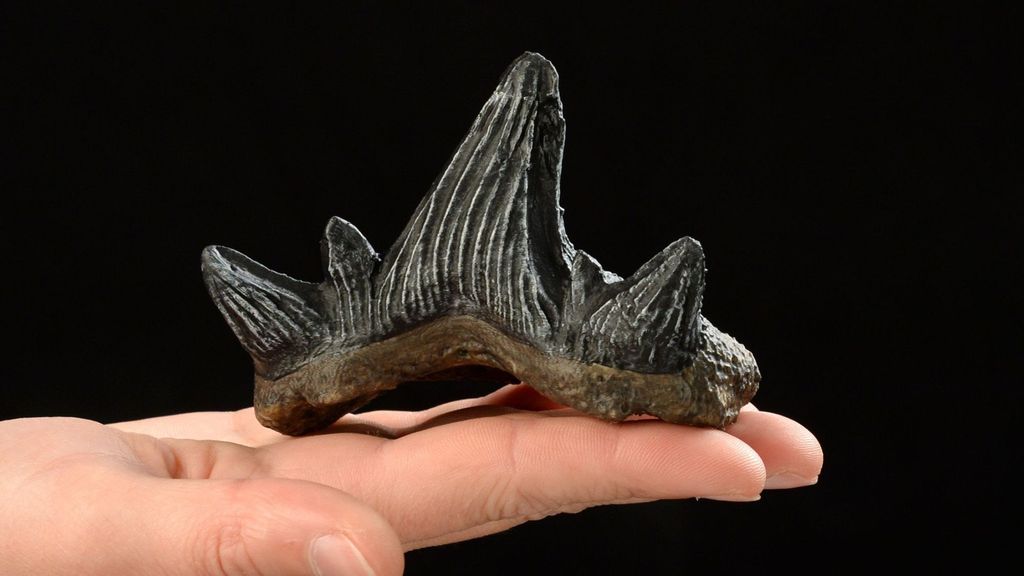 This recently discovered tooth belonged to a newly classified shark species from more than 325 million years ago. (NHM Vienna/Alice Schumacher/Zenger)

VIENNA, Austria — The teeth of a previously undiscovered shark species considered to be the oldest to have existed in Austria provide evidence of a global freeze that occurred about 325 million years ago, forming glaciers in the mountains of the tropics.

The Carboniferous Period — roughly 358 to 298 million years ago — experienced some dramatic climate changes. Ice caps formed several times at the poles, leading to a dramatic sea-level drop and, consequently, to the extinction of many prehistoric sharks species, scientists say.

The research team was led by Iris Feichtinger and Viola Winkler from the Natural History Museum Vienna, who visualized the shark teeth with the help of X-ray microtomography, an imaging technology that uses X-rays to create cross-sections of a physical object.

In analyzing the teeth’s internal canals of blood vessels, the researchers quickly realized that they came from a previously unknown shark species.

The team named the species Cladodus gailensis after Gail Valley in the Carnic and Gailtal Alps in Austria where it was found. The mountains formed from the impact of the world’s land that was then collected into just two supercontinents — Euramerica and Gondwana — pressing together near the equator.

The Carnic and Gailtal Alps — a mountain belt belonging to the Southern Limestone Alps located in Austria and Italy — have provided evidence for a highly abundant aquatic ecosystem during the Carboniferous period and included various corals and trilobites as well as prehistoric sharks.

Its name derives from the Latin words carbo and fero, and it translates to coal-bearing, referring to the many coal beds formed globally during that time.

Feichtinger’s team discovered that global freezing had a huge impact on shark diversity. Shortly before the first major glacial period, the changing climate led to a first mass extinction among prehistoric sharks. Then, following a brief recovery period, a second drastic extinction occurred.

After the peak of the glaciation, water that melted from the thawing ice sheets led to the formation of new habitats, which freshwater sharks immediately occupied.

“Although marine sharks were strongly affected and recovered slowly, freshwater sharks began to spread rapidly throughout the rivers and lakes of the continents, leading to a significant increase in diversity,” said Feichtinger.

Georg Feulner of the Potsdam Institute for Climate Impact Research investigated the atmosphere’s carbon dioxide levels during the Carboniferous using a climate model specific for the ancient period.