A Sudanese refugee from Tennessee has left the comfort of his American home to help in the humanitarian assistance in Darfur.
By Hollie McKay July 30, 2021
Facebook
Twitter
Linkedin
Email 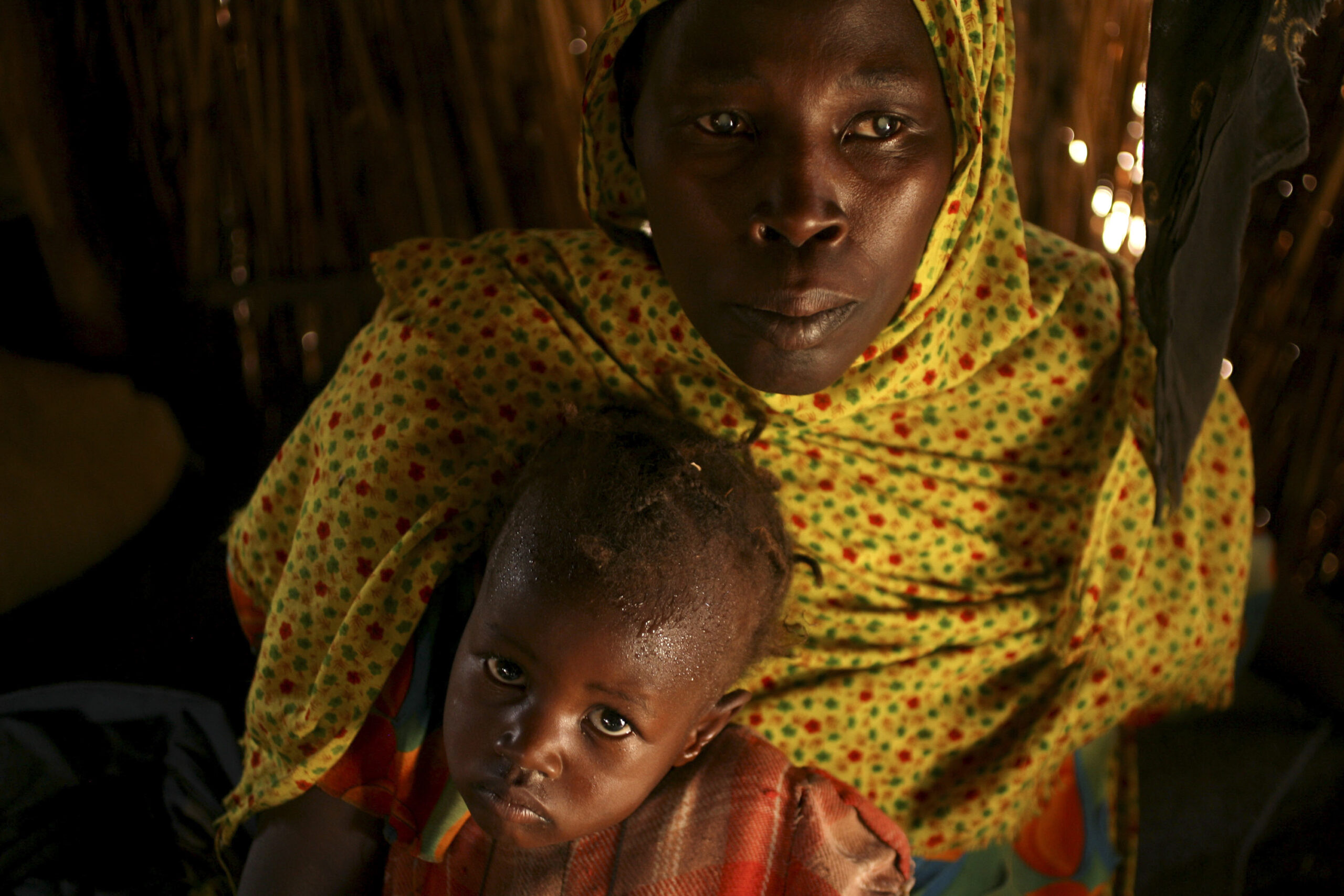 Blind Sudanese refugee Fathna Ibrahim, who lost her husband and was tortured by members of Janjaweed, sits with her daughter in a hut in the Goz Amir Refugee Camp on April 19, 2007, in Chad. (Uriel Sinai/Getty Images)

NASHVILLE, Tenn. — Each morning, Juma Sefedin Shaibu, a physician assistant at the cardiology department at Vanderbilt University Hospital in Nashville, Tennessee, scrolls through social media for the latest updates from his war-torn homeland, Darfur, Sudan.

“Bandits still rape women, burn huts to the ground, and every day people are running for their lives,” Shaibu, 42, told Zenger News, examining the smoking ruins on the edges of El Geneina, the capital of West Darfur.

“Children are starving, and people can’t get adequate water. Even when they run to camps for the internally displaced people, the attackers overrun the camps, displacing the victims twice over.”

His uncle, a driver for a local aid organization, was ripped from his car and shot at on the edges of El Geneina in June 2021. He is currently recovering.

Shaibu came to the United States as a refugee in 2014, but the Darfur crisis spurred him in July 2021 to return to the troubled region that much of his family have fled from.

In a partnership with the reconciliation-focused non-governmental organization Sudan Sunrise, Shaibu will assist in food distribution and delivery of medical assistance to those in need.

“We are buying food items like maize, beans, and cooking oil. It’s important to help as much as we can with medical supplies, especially delivering painkillers.”

Shaibu, the Kujali Africa community president in Nashville, was conscripted as a child soldier for the anti-government Sudan People’s Liberation Army in the 1990s during the Sudanese civil war.

He feels that the Darfur conflict has dimmed from the press and mind of the international community, even though the region is still in turmoil, but without the same scale of media attention and humanitarian assistance as when the conflict hit the headlines in 2003.

Like Shaibu, Halima Hamad, 44, came to the United States with her daughter and husband as a refugee from Darfur in 2012, but her life in America still revolves around the war thousands of miles back home.

“They [militias] don’t care about the age of the women,” Hamad, also a Nashville resident, told Zenger News.

“They will put a gun to the husband’s head and make them watch the rape. There is no freedom nor justice for my people. I think of home in Darfur and what my people are going through all day, all night.”

Hamad, who has worked various factory jobs in the United States, was severely beaten with the butt of a Janjaweed’s AK-47 15 years ago, an assault that left her with hormonal disorders.

“My hair turned all white after the incident,” she told Zenger News.

Khamis Hassan, a spokesperson for the United Resistance Front, an umbrella group for five rebel factions formed in 2007, said the event that still haunts his memory happened in May 2016.

Hassan, who was then a police officer, said he found several badly beaten girls and women hiding in the bush, having been gang-raped while collecting firewood in a village in Darfur.

“They had open wounds all over their bodies and were terrified and crying,” he told Zenger News from France.

“I was heartbroken. I did not feel well after that. So I quit my job in the police and left the country.”

In 2017, he fled to Paris, France, to focus on speaking for the United Resistance Front. He said life for those he left behind continues to deteriorate.

“There is no food, no schools, and people cannot go to their farms to cultivate crops. We need help. If not, we will fight — it is our last option. I will not sit in my house and wait while attackers slaughter my people.”

In January 2021, just weeks after the United Nations peacekeepers withdrew following 13 years of presence, the Kirinding camp for the internally displaced was attacked by gunmen who killed more than 160 people.

The departure of the United Nations peacekeepers followed an October 2020 peace deal between some — but not all — rebel groups in Darfur and Sudan’s transitional government, which came to power in 2019 in an uprising that usurped longtime President Omar al-Bashir.

Thousands suffer from severe acute malnutrition with little access to anything more than mangoes to eat, according to medical aid group Medicins Sans Frontieres.

Some Darfuris say the perpetrators of the conflict have ties to the paramilitary unit Rapid Support Forces, an outfit comprising remnants of the pro-Bashir Janjaweed militia accused of orchestrating the genocide that first hit the region some 18 years ago.

“The Rapid Support Forces is the same as the Janjaweed,” Shaibu told Zenger News.

“It is a powerful militia, with support from the government in Khartoum. They used to come on camels and horses, but now it is all land cruisers and trucks.”

He said the Janjaweed are still benefiting from the war by selling minerals, such as gold, and stolen livestock.

“But it is worse now as nobody is paying attention.”

The initial conflict — later deemed genocide by Washington — broke out in 2003 when frustrated non-Arab revolt protested the Bashir-led Sudanese government, angered by the lack of resources in the barren area on the western edges of the country.

Instead, the majority Arab Janjaweed — which translates to “evil horsemen”—crushed the demonstrations and uprooted more than two million from their homes, according to the United Nations.

The carnage drew the attention of Hollywood bigwigs who drove the viral “Save Darfur” campaign.

“Without him, we would never have had a full picture of what was happening across our lands,” Shaibu told Zenger News.

But Darfuris emphasize that the continued contentions are nuanced.

“But this is our land—the land of our ancestors.”

The chaos has been rendered worse by the notion that the attention — and the subsequent aid flow — has faded. And even though Bashir, the central offender, is behind bars, the situation continues to worsen.

After removing most of the bilateral sanctions in 2017, the United States officially removed Sudan’s 28-year status as a state sponsor of terrorism, paving the way for closer economic and business ties.

Experts and ordinary people like Shaibu contend that they have not seen any benefits of the sanctions’ removal.

“The Sudanese economy was saddled not only with the US sanctions but more devastatingly by the systemic kleptocracy of the Bashir regime,” Suliman Baldo, a senior advisor at The Sentry, told Zenger News.

“Resolving the marginalization of peripheral regions would require a strong political will driving new thinking in economic planning. In other words, it would be years before Darfur and other marginal regions would see any benefits from the ending of Sudan’s economic isolation.”

The Sentry is an investigative and policy team that follows the dirty money connected to war criminals and transnational war profiteers. It succeeded the Satellite Sentinel Project, which was closed down in 2015.

David Otto, an international defense and security specialist and the Geneva Center for African Security and Strategic Studies director, said the Darfur crisis serves as a lesson to the international community about the broader implications once peacekeeping missions conclude.

“Those who perpetrate violence in Darfur knew the opportunity and loophole would be created eventually,” he told Zenger News.

“It is like any other insurgency strategy—time is always on their side. Peacekeeping missions do not resolve underlying problems.”

The International Criminal Court indicted Bashir in 2009 in response to human rights abuses carried out by the military and loyal militias during the Darfur conflict.

While he remains behind bars in Khartoum, the new government has not yet turned him over.

“There is no justice, nobody has said sorry, and it was all just covered up. People feel voiceless. But we Masalit will never give up. We will fight until our last breath,” Shaibu told Zenger News.

Shaibu said that the United States and the broader international community could take action to alleviate the situation.

“The lifting of the sanctions did not help us. We need reconciliation, and the key to that is peace and justice. We are just farmers and cattle keepers, and we don’t want to fight. We need peace, and we need Washington to put pressure on the Sudanese government to stop this killing and let Bashir face the International Criminal Court.”

The Sudanese Embassy in Washington did not respond to email requests for comment.