VIDEO: US Coast Guard Rescues Pilot Who Crashed In Bay

Sole occupant plucked from atop small plane that had flipped on its back. 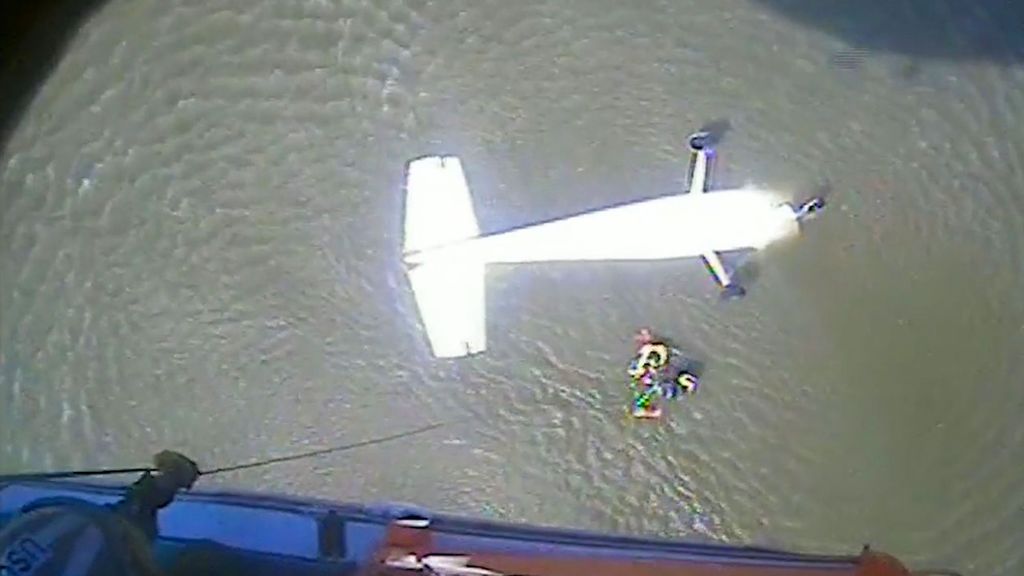 The crew of a U.S. Coast Guard helicopter hoists the pilot from a single-engine plane that crashed in Fourleague Bay near Morgan City, Louisiana. (U.S. Coast Guard District 8, DVIDS/Zenger)

The U.S. Coast Guard rescued a pilot whose single-engine aircraft crash-landed in a bay adjacent to the Gulf of Mexico.

The plane went down in Fourleague Bay, near Morgan City, Louisiana, on Tuesday morning.

The coast guard received calls about the crash at 8:18 a.m, along with information that one person was seen exiting the aircraft and scrambling atop the craft, which video released by the guard show was floating with its wheels up.

The coast guard hoisted the pilot of the downed 2002 Cessna 182T Skylane onboard the chopper.

Video shows the white plane upside-down in the water with its wheels pointing skyward and what appears to be a person wearing a life jacket sitting between the wheels.

The rescued person, after being winched on board the helicopter, was handed over to a waiting team of medics at a nearby hospital in Morgan City.

Local authorities said the pilot, whose identity was not disclosed, suffered minor injuries and was the only person on the plane.

It is not yet known what caused the plane to go down, and whether it sank or was recovered from the water.

Introduced in 1956, the 182 Cessna line has been produced in a number of versions, including one with retractable landing gear. It is the second most popular Cessna model still in production, after the 172.

A 2016 study published by Air Facts, which describes itself as “the journal for personal air travel — by pilots, for pilots,” — found that the Cessna 182 had a fatal accident rate of 0.74 per 100,000 hours of flight time, which the study’s author said is “better than the average for private aircraft.” No overall figure was provided.

The Bureau of Transportation Statistics, under the heading U.S. General Aviation Safety Data, lists 1,220 total accidents, 21,801 flight hours and 414 fatalities in 2019, the most recent year for which data is available.

The National Transportation Safety Board is typically called in to investigate the causes of civilian aircraft mishaps.