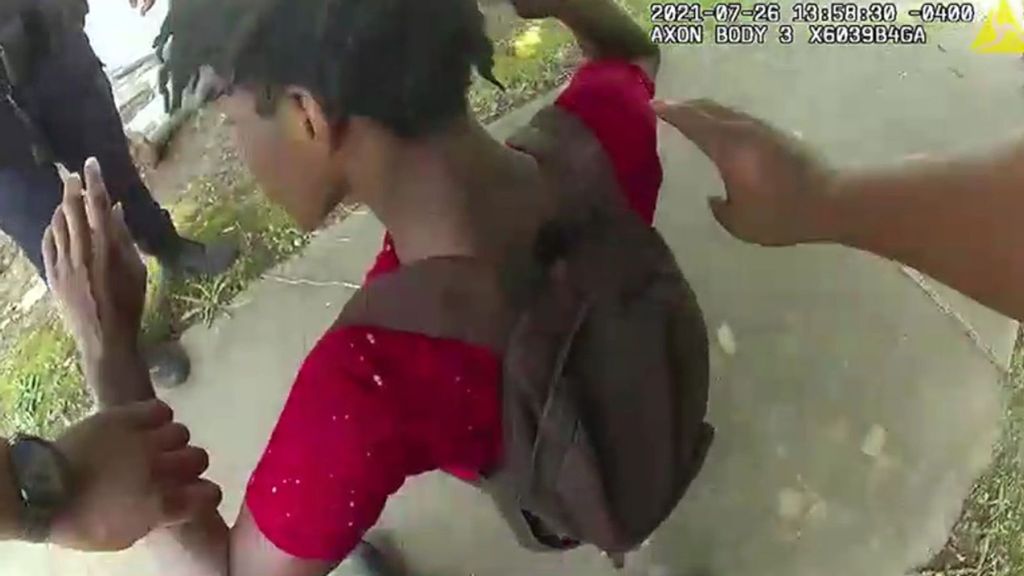 Bank robbery suspect Jabrell Harvey with hands up before being detained by police in Atlanta, Georgia on July 26, 2021. (Atlanta Police Department/Zenger)

Footage from Atlanta Police Department body cameras shows the moment officers tracked down and handcuffed a bank robbery suspect shortly after he allegedly held up a bank clerk for cash.

The bank robbery took place at a Wells Fargo bank located at the 2800 block of Greenbriar Parkway SW in Atlanta, Georgia. The suspect is identified as 21-year-old Jabrell Harvey.

Officers responded to a silent alarm that was triggered at the bank, the police department said in a statement.

“An adult male suspect had entered the bank and passed a note demanding money to the teller,” they said.

The bank worker, who has not been named, complied with the demand and handed over an undisclosed amount of cash.

The video shows an officer getting out of his vehicle and pointing his gun at the young man wearing a red t-shirt. The officer ordered the suspect to put his hands up and stay still. The suspect appeared to be cooperative.

Then, a second police vehicle comes to a stop to the left of the first officer, in the middle of the road.

The police officer approaches the suspect while ordering him to keep his hands up.

The suspect can then be seen putting his hands behind his head and getting to his knees.

The police officer then puts the suspect’s hands behind his back and handcuffs him. The officer explains to the suspect that he is only being detained and not being arrested.

He also explained that he will let the suspect know what they are doing.

“I appreciate your cooperation,” one of the officers said on video.

The officer then explains to the suspect that they have been tracking a suspected bank robber and that he appears to match their description.

The video then ends, with the police department reporting that they then found the money from the robbery inside the young man’s backpack.

“The clear communication, calm disposition and professional demeanor of the officers involved in this arrest is noteworthy. We are proud of the work our officers do daily, most of which never makes the news. Job well done Zone 4!” the police department said on Facebook.

The suspect remains in custody, although it is unclear if he is formally charged at the time of writing. It is also unclear how much jail time he faces.

Atlanta had 1,099 robberies in 2018, according to the most recent data from the FBI’s Uniform Crime Reporting Program.