From a vivid sunset to the Milky Way galaxy, a remote-controlled drone captures the scene changing for 30 hours.
By Feza Uzay July 29, 2021
Facebook
Twitter
Linkedin
Email 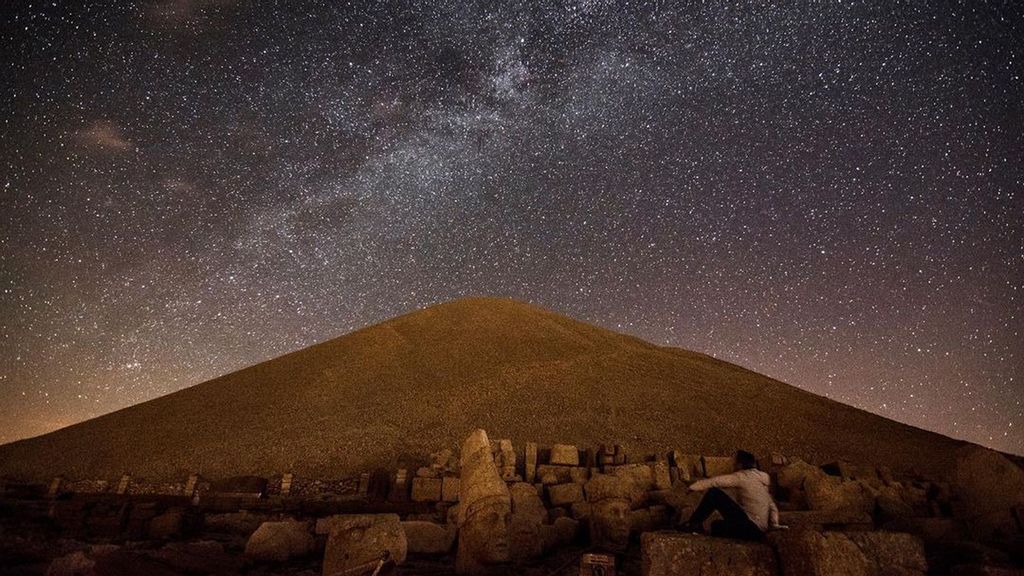 During overnight filming of Mount Nemrut in southeastern Turkey, drone artist Isa Turan captured this view of the Milky Way in his time-lapse drone video on July 10. (@jesus_tr/Zenger)

Time-lapse footage shot by a drone artist in Turkey last month shows a cloudless overhead view of a 7,000-foot mountain where a king was buried more than two millennia ago.

The dramatic video compresses hours into seconds, going from light to pitch-black dark and back again, and shows a palette of stars rotating in the night sky.

UNESCO named Mount Nemrut a World Heritage Site in 1987. The peak in southeastern Turkey is noted for the 30-foot-tall statues around its summit.

“All night long, we were alone with the statues under the stars,” said Isa Turan, who captured a broad range of views of the mountain. He posted the finished time-lapse video online.

King Antiochus I Theos of Commagene built a tomb-sanctuary on the summit in 62 B.C. and flanked it with the huge statues. In addition to his own likeness, he commissioned towering likenesses of lions, eagles and various Greek and Persian gods.

The statues once had the names of the gods inscribed on them. They also had heads, which time and the elements have scattered throughout the site.

“The video starts with the sunset on the western face of Mount Nemrut on the evening of July 10,” Turan said. “Later, it becomes night and the Milky Way and the stars are visible. Finally, after continuing with night scenes on the eastern terrace, the sun rises.

“We didn’t even close our eyes for a minute during the 30 hours that passed until we went from Izmir to Nemrut and completed the shooting,” he said. “We were one of the few lucky people who experienced the sunset, starry nights and sunrise at the same time in Nemrut, which we arrived at in the evening.

Antiochus I was half Armenian and half Greek. Although the Roman Republic was annexing territories during his reign, Antiochus used diplomacy to keep Commagene independent. He made peace with Pompey in 64 B.C. when the Roman general invaded Syria, eventually becoming an ally.

None of that moves today’s visitors who come to Mount Nemrut. It’s the scale of the construction and the mountain, together with the far broader grandeur of the galaxy.

“It is really difficult for me to express my experience and my feelings into words. We have officially made a journey into history among these ruins built thousands of years ago,” Turan said.

“It was an extraordinary experience to be so close to the sky in the pitch black of night, with the howling of the strong wind and the stars seemingly within touching distance.”