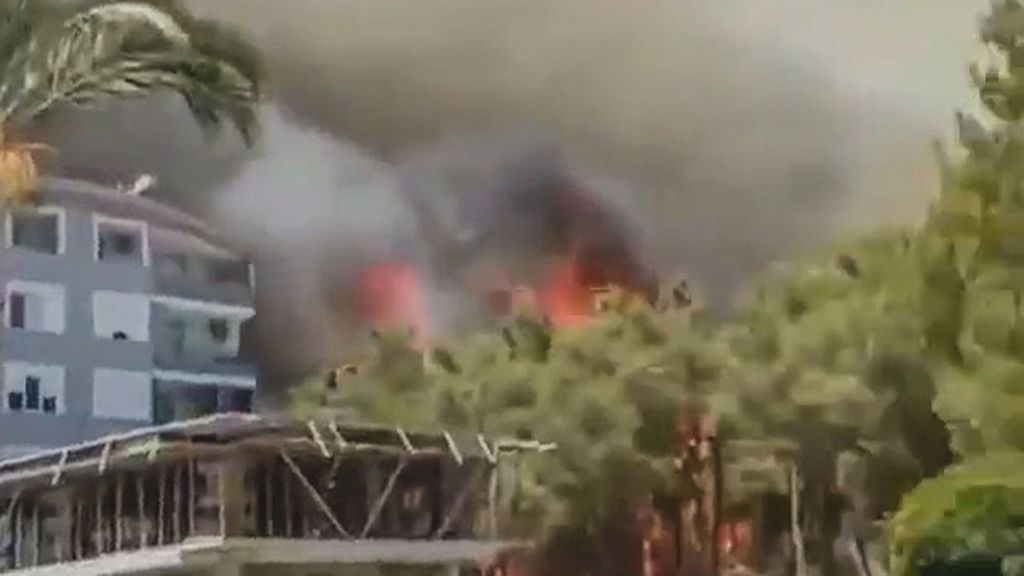 Thick, black smoke from a forest fire that may have been intentionally set spreads through the city of Antalya, Turkey. (@bursayadairherbirsey/Zenger)

Forest fires that may have been started deliberately at separate locations near a famous Turkish holiday resort left hundreds of people homeless and hundreds more fleeing their homes to escape the flames.

The fires broke out around noon on July 28 at four different points in the Yenikoy, Evrenseki, Colakli and Kalemler neighborhoods in the district of Manavgat in the southern Turkish province of Antalya, a major center of the local tourist industry. The Manavgat Chief Public Prosecutor’s Office launched an investigation into the cause of the fires.

The north wind spread the fire, which first broke out in the forest area near the Yenikoy neighborhood. At the same time, the fires that broke out in Evrenseki, Colakli and Kalemler grew into a larger area.

Officials quickly evacuated the settlements there. The entire village of Yukariseki and half of another village were burned down. Many small animals and cattle perished.

“I have not seen such fires,” said Muhittin Bocek, mayor of the Antalya Metropolitan Municipality. “No loss of life so far. It is thought-provoking that fires broke out at four points at the same time. It will be investigated whether there is arson.”

Many videos of the fire were shared on social media. The size of the fire and the layer of smoke covering the sky in the videos drew attention to the seriousness of the incident.

First Lady Emine Erdoğan, the wife of President Recep Tayyip Erdoğan, conveyed her best wishes to the people of Antalya in a post she shared on her Twitter account.

“I wish the fires to be put out before anyone gets hurt. Disasters cause irreparable losses. Nature is our only treasure that we should cherish,” she said.

In Turkey, the peak fire season typically begins in early July and lasts around four months. In the Antalya region it lasts around 11 weeks, according to Global Forest Watch.

They reported that NASA’s Visible Infrared Imaging Radiometer Suite sent out 171 fire alerts detected from satellite technology in Turkey this week, 129 of which were from Antalya. In comparison, last week there were a total of 20 alerts in the country.

The organization also reported that the number of alerts between Aug. 2020 and July 2021 in Antalya was unusually high compared to previous years going back to 2012.