Guatemalan migrant reached near the top of a peak in Arizona but called for help when he realized he couldn't get back down.
By Joseph Golder July 29, 2021
Facebook
Twitter
Linkedin
Email 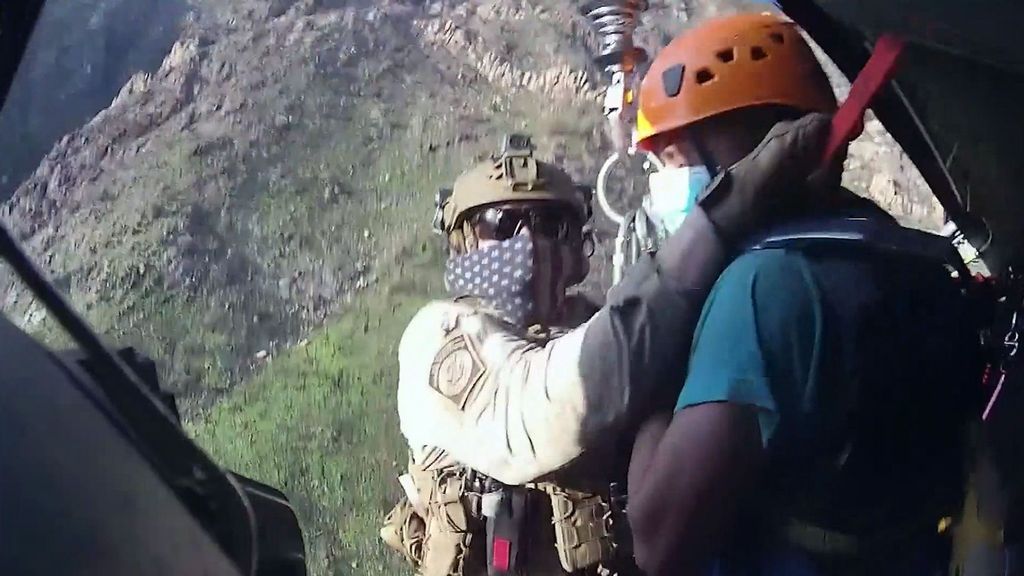 A Guatemalan man and border patrol agents were hoisted into a rescue helicopter in the Baboquivari Mountains southwest of Tucson, Arizona, after the migrant's rescue on July 26, 2021. (DVIDS, U.S. Customs and Border Protection Office of Public Affairs/Zenger)

U.S. border officials airlifted a Guatemalan migrant to safety after he became stranded on a mountain in Arizona.

The U.S. Customs and Border Protection (CBP) rescue operation took place on Monday in the Baboquivari Peak Wilderness area near Tucson, not far from the Mexican border. The area is administered by the Bureau of Land Management.

The rescue team responded to an emergency call by the 24-year-old migrant after he became stranded near the peak. Elevation at the peak, a popular spot for climbers, is 7,730 feet.

The team arrived at his location in an Air and Marine Operations (AMO)  Black Hawk helicopter. Due to the rugged terrain, the AMO crew had to airlift the man onboard. First, a medic was sent down to the man’s position to prepare him for extraction.

The Black Hawk team then flew the Guatemalan man to a temporary immigration processing facility, according to the CBP.

Video shows the Black Hawk helicopter arriving at the location before sending down two AMO officials to check the migrant and prepare him for extraction while the chopper hovers overhead.

One AMO agent returns to the helicopter while his colleague waits to be airlifted with the migrant. Then the pair is seen hoisted onboard the Black Hawk before closing the door and making their way to the immigration processing facility.

“The Tucson Sector has encountered more than 118,000 single adult migrants this fiscal year to date [in June], a 282 percent increase over last year,” CBP states.

CBP data shows the sector saw an 83 percent increase in encounters with unaccompanied children as of March. That’s compared with the same period in 2020.

By the end of June, more than 13,000 unaccompanied children had crossed the border at Tuscon this year, a 189 percent increase, compared with 2000, U.S. Customs and Border Protection stated.

Last week, one single group in Tuscon included 197 migrants, of which 147 were unaccompanied migrant children, mostly from Guatemala, the CBP stated.

All members of both groups were transported to Tucson for processing.

From his first day in office on Jan. 20, President Joseph R. Biden Jr. has reversed many of the restrictive immigration policies of the Donald J. Trump administration.