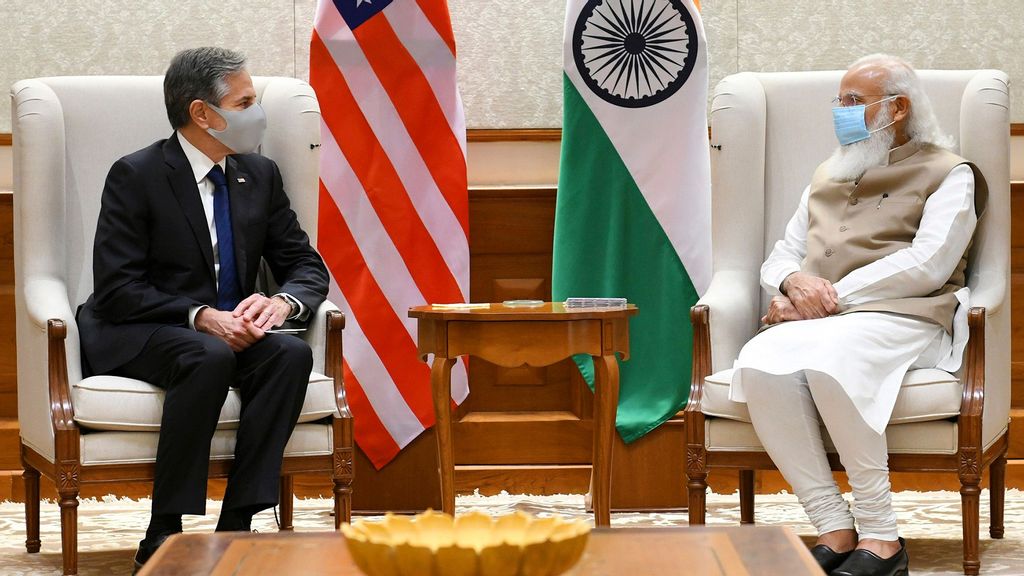 The US Secretary of State, Antony J. Blinken calling on the Prime Minister, Narendra Modi, in New Delhi on July 28, 2021. (pib.gov.in)

NEW DELHI — “We recognize that every democracy, starting with our own, is a work in progress, and when we discuss these issues, I certainly do it from starting point of humility,” United States Secretary of State Antony Blinken said as he concluded his two-day trip to India.

Topics like the Covid-19 pandemic, vaccinations, human rights issues, Afghanistan, and terrorism were some issues discussed between the two countries during the visit.

The Secretary of State is the third high-ranking Biden administration official to visit India after the new government came to power in the U.S. in January. U.S. Defence Secretary Lloyd Austin visited India in March, and U.S. Special Envoy on Climate Change John Kerry came to the country in April.

Blinken met the Indian Prime Minister Narendra Modi on July 28. As per Prime Minister’s Office release, Blinken appreciated the increasing convergence between India and the U.S. on a wide range of bilateral and multilateral issues and the commitment of both strategic partners to convert this convergence into concrete and practical cooperation.

“Good to meet U.S. Secretary of State Secretary Blinken today. I welcome President Biden’s strong commitment to strengthening the India-US Strategic Partnership, which is anchored in our shared democratic values and is a force for global good,” tweeted Modi on July 28.

The security situation in Afghanistan was one of the key issues discussed during Blinken’s visit as the Indian government believes in the importance of the U.S. support for Afghan forces over the next few months to establish a democratic system in Kabul, as per media reports.

The United States announced that they would move out of Afghanistan by Aug. 31, 2021.

Blinken, who was on his maiden visit to India, was quizzed on the human rights record of India and the stand of the United States on the matter at the end of his talks with his Indian counterpart S. Jaishankar in New Delhi.

“We have seen challenges faced by democracy in the past, and it faces today, but this is common to all democracies,” said Blinken.

“I mentioned this earlier, we talk about in our founding document, search for a more perfect union that means that we are not perfect. Our quest is to get closer to the ideals we set for ourselves.”

“A wide-ranging and productive discussion today with Secretary Blinken. Useful in mapping out the next steps in our bilateral partnership. Strong convergence of views on many regional concerns. Agreed to work closely on multilateral and global issues,” tweeted S. Jaishankar after the meeting.

“We discussed regional security issues, including Afghanistan. India and the U.S. share a strong interest in peaceful, secure, and stable Afghanistan. As a credible partner in the region, India has and will continue to make a vital contribution to Afghanistan’s stability and development,” Blinken said at a joint presser after the meeting with Jaishankar.

During his visit, Blinken also announced a $25 million dollar support by the U.S. government for the Indian Covid-19 vaccination program.

“Today, I’m proud to announce an additional $25 million from the U.S. government, through the U.S. Agency for International Development, to support India’s Covid-19 vaccination program. The United States’ support will help save lives by strengthening vaccine supply chains across India,” tweeted Blinken on July 28.

Blinken also met with the Indian National Security Adviser Ajit Doval and discussed the Taliban in the Indo-Pacific region. He said that terrorism is a great challenge for democracies in today’s world.

Blinken is going to Kabul for the next leg of his visit to South-East Asia.