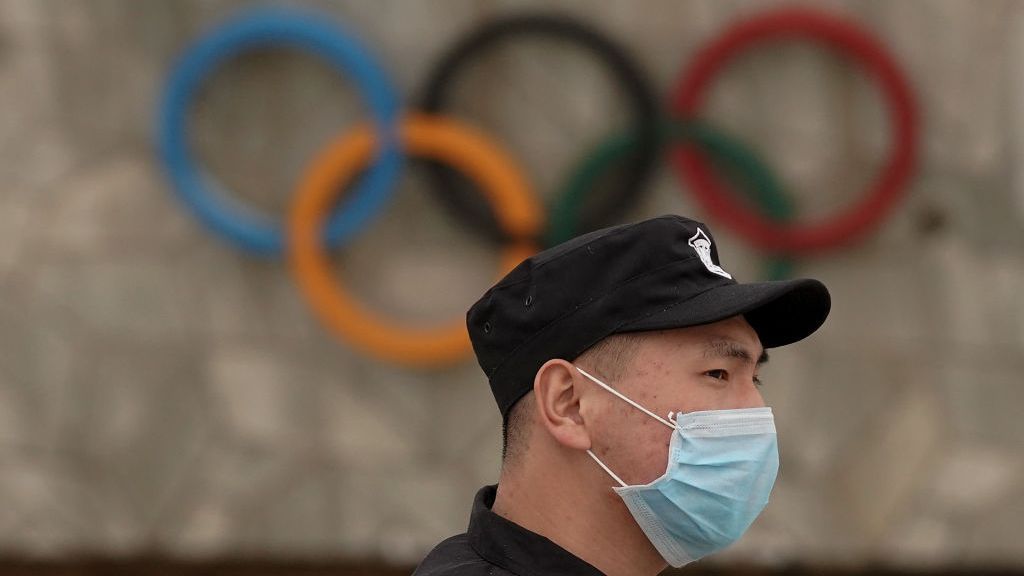 There is new bipartisan pressure for the Olympics to be relocated out of China due to alleged human rights abuses. (Photo by Lintao Zhang/Getty Images)

Even as athletes from around the globe compete in the delayed 2020 Summer Olympic Games in Tokyo, a growing movement is seeking to move or postpone next year’s Winter Olympics in Beijing, China. Organizers cite the Communist country’s alleged use of forced labor for consumer products and materials that flood multinational corporations’ supply chains.

The latest salvo in the push to move or delay the 2022 games slated for the Chinese capital of Beijing comes from an American congressional committee set up to observe China’s human-rights practices. Committee officials say that relocation would serve as a sanction for the country’s alleged forced labor practices that have been increasingly tied to America’s growing solar power industry, and to products and materials used in sneakers, mobile phones, TVs and other consumer products.

The Congressional-Executive Commission on China asked Thomas Bach, president of the International Olympic Committee to postpone the 2022 Beijing Winter Olympics and to relocate them if the host government does not end what the group describes as the country’s “egregious” human-rights abuses. In a letter dated July 23, the commission wrote that “no Olympics should be held in a country whose government is committing genocide and crimes against humanity.”

The commission includes members of Congress and presidential appointees. It was established in 2000 to monitor human rights and the development of the rule of law in China.

Other significant politicians and activists have echoed the commission’s sentiments. House Speaker Nancy Pelosi, a Democrat, and Texas Rep. Michael McCaul, the top House Republican on foreign policy issues, have called for a boycott if the games aren’t moved.

Meanwhile, China’s foreign ministry website doesn’t have a statement on the brewing boycott. But the Council on Foreign Relations has said that the foreign ministry “has warned of a ‘robust response’ to any boycotts.” The organization said Beijing is likely to leverage its consumer market of 1.4 billion people against companies that participate in a boycott.

Chinese state-run broadcaster CGTN has reported that Beijing is putting $3.9 billion into holding the games. That relatively small price tag reflects the city’s plans to reuse some venues created when Beijing last hosted an Olympics, in the summer of 2008.

So far, the International Olympic Committee hasn’t issued a statement on the calls to deny Beijing a repeat. The World Uyghur Congress, an international advocacy group for the Uyghur people, filed a complaint with the committee’s ethics commission over its failure to weigh in before the entire committee decides whether to move the 2022 games.

Allegations of forced labor in Xinjiang

The U.S. lawmakers’ letter is just the latest note in a crescendo of activity from the government and organizations around the world that want to highlight China’s labor practices in the Xinjiang Uyghur Autonomous Region, where authorities are accused of forcing Muslim ethnic minorities, particularly the Uyghurs and Kazakhs, into internment camps and forced labor programs.

It’s not just consumer-goods companies like Nike, Coca-Cola, Calvin Klein and the Campbell Soup Co. that are grappling with the issue and its fallout. Also seeing a major impact is America’s fast-growing solar power industry, which relies heavily on imports of Chinese-made solar panels.

“Forced labor will not be tolerated in our industry,” said John Smirnow, vice president of market strategy for the Solar Energy Industries Association. “Given reports of labor abuses in Xinjiang and the inability to conduct independent audits there, solar companies should immediately move their supply chains out of the region.”

American imports are increasingly tied to the Uyghur region, a report from the congressional-executive commission found in March 2020. The committee identified products that could be the result of forced labor, including clothing and textiles, food products, cell phones and other electronics, shoes and even tea.

The commission has asked the Olympic committee to deny China the chance to host the games next year.

In May, a report from the United Kingdom’s Sheffield Hallam University found that involuntary workers in China’s Uyghur region “can pervade an entire supply chain and reach deep into international markets” of solar panels.

Solar-grade polysilicon is the primary material used for 95 percent of solar modules, and polysilicon manufacturers in the Xinjiang Uyghur Autonomous Region of China accounted for about 45 percent of the material’s worldwide supply, the report found.

“Labor transfers are deployed in the Uyghur Region within an environment of unprecedented coercion, undergirded by the constant threat of re-education and internment,” the report said. “Many indigenous workers are unable to refuse or walk away from these jobs, and thus the programs are tantamount to forcible transfer of populations and enslavement.”

In response, Congress and President Joseph R. Biden have taken modest action. The Senate passed legislation in July targeting China’s labor practices in the Uyghur region; the Biden administration in June banned imports of material from firms linked to the area.

“A broad bipartisan consensus has coalesced around excising Chinese goods tainted by forced labor and human rights abuses from U.S. supply chains. Existing efforts have largely targeted agricultural and textile products, but policymakers are now looking into the solar industry’s ties to Xinjiang,” said Matthew P. Funaiole, a senior fellow at the Center for Strategic and International Studies.

The solar industry is not the only one assessing its ties to the Uyghur region. In its May 2020 report, the congressional-executive commission published a list of recognizable American brands that were “suspected of directly employing forced labor or sourcing from suppliers that are suspected of using forced labor.”

“Soon, many or most products made in China that rely at least in part on low-skilled, labor-intensive manufacturing, could contain elements of involuntary ethnic minority labor from Xinjiang,” researcher Adrian Zenz said in the report.

Nike, one of the companies the commission cited, said it does not source products from the Uyghur region. The company said it would continue to work with suppliers to ensure that its products aren’t the product of forced labor.

“We have confirmed with our contract suppliers that they are not using textiles or spun yarn from the region,” Nike said in a statement. “While Nike does not directly source cotton, or other raw materials, traceability at the raw materials level is an area of ongoing focus. We are working closely with our suppliers, industry associations, brands and other stakeholders to pilot traceability approaches and map material sources, so we can have confidence the materials in our products are responsibly produced.”

The Solar Energy Industries Association released a tool for solar panel suppliers in April, designed to increase supply chain transparency. But limited information is available about the region, so both industry officials and human rights advocates acknowledge that government restrictions in the region make it impossible to accurately trace materials and products.

“The fact is, we do not have transparency into supply chains in the Xinjiang region, and there is too much risk in operating there,” the solar association’s Smirnow said in June. “For that reason, in October, we began calling on solar companies to leave the region and we provided them a traceability protocol to help ensure there is not forced labor in the supply chain.”

It could soon be illegal in the U.S. to source any product from the Uyghur region, regardless of whether production and labor practices are audited to detect forced labor.

The Senate has approved legislation that would prohibit the import of any material or product sourced to the Uyghur region. The House is expected to follow suit: A similar bill passed the House in September 2020, with only three members voting no.