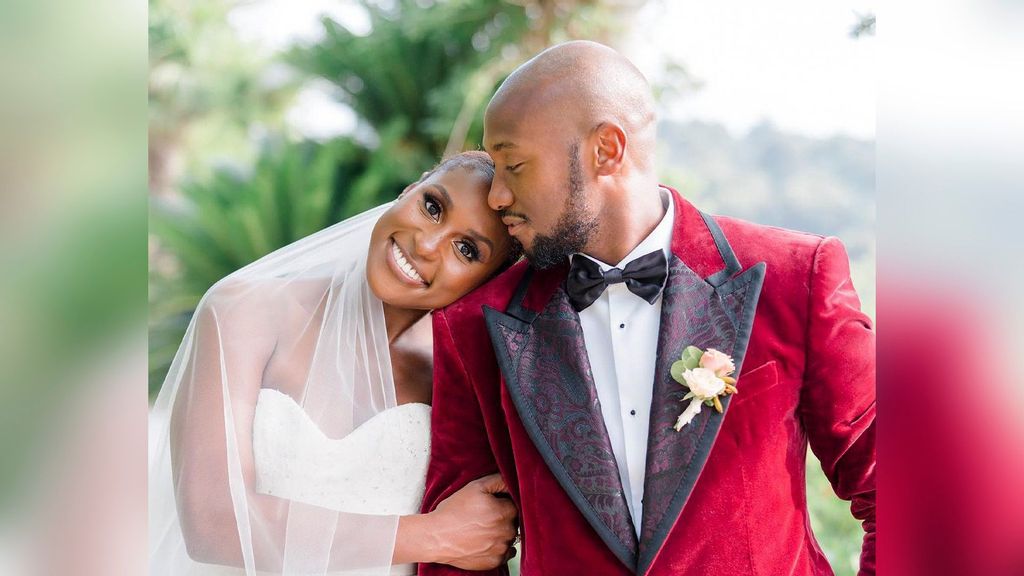 WASHINGTON — Emmy-nominated actor Issa Rae has finally tied the knot with her long-time beau and businessman Louis Diame in a destination wedding in France, Europe, over the weekend.

The “Insecure” star wrote on Instagram that she got married to Diame on July 25, 2021, and shared photos from the ceremony held at Saint-Jean-Cap-Ferrat, a commune in the South of France.

In the wedding photos, Rae could be seen all smiles in her custom Vera Wang gown, as well as in romantic snapshots with her new husband, who wore a red Dolce and Gabbana velvet tux.

Rae, who is private about her personal life, played it coy, and posted a caption, referring to the big day as an “impromptu photo shoot.”

“A) Impromptu photoshoot in a custom @verawanggang dress. B) My girls came to help me, but they all coincidentally had on the same dress! (sic)” said Rae in the post. “They were sooooo embarrassed. C) Then I took a few flicks with Somebody’s Husband (sic),” she joked in the caption.

She also shared several photos of herself with her bridesmaids.

A slew of Rae’s famous friends congratulated “The Lovebirds” actor for tying the knot, including “Grey’s Anatomy” star Kelly McCreary.

Back in March 2019, at the National Association for the Advancement of Colored People (NAACP) Image Awards, Rae’s “Insecure” co-stars Jay Ellis and Yvonne Orji confirmed that Rae was engaged while they walked the red carpet, according to reports.

Rumors of her engagement first began to swirl after she was spotted wearing a diamond ring on the cover of a magazine’s April 2019 issue.

Little is known about Diame except for his profession, who’s been photographed with Rae on a few red carpets over the years, and Rae has insisted she wants to keep her personal life to herself.

Rae had previously explained why she wants to keep those details under wraps.

“I guess because it’s private. Whose business is it? I realized I just don’t like to be the subject of conversations if it doesn’t have to do with my work,” she said.

Rae is best known for co-creating, co-writing, and starring in the HBO comedy series “Insecure” (2016–present), for which she has received many Golden Globe and Primetime Emmy nominations. Her memoir “The Misadventures of Awkward Black Girl,” published in 2015, was a New York Times best-seller.

Rae has used her platform to raise awareness about police brutality and violence against African-Americans. She raised $700,000 for the Sterling Family Trust after the police shooting of Alton Sterling in 2016 for the Sterling children’s college education.