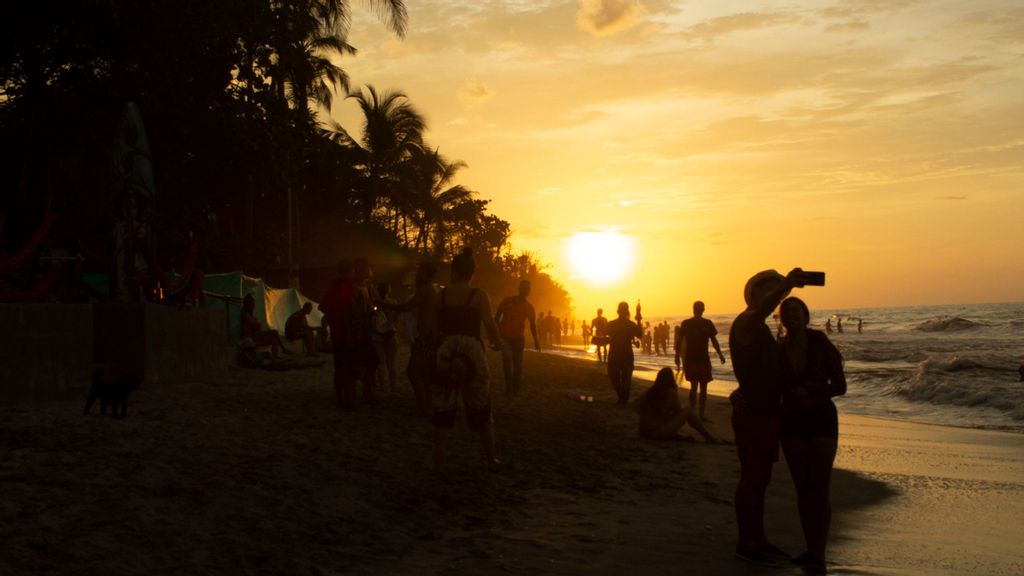 Tourists enjoying the sunset on a crowded beach day on July 20, 2021. (Mavi Parra/Zenger)

PALOMINO, Colombia — The seaside village on Palomino, on a Colombia’s Caribbean coast, went from off-the-beaten-path destination to touristic hotspot in less than a decade. Now, the paradise beachfront that placed it on the map is on the verge of disappearing.

Many have described Palomino’s coastline as having Colombia’s most perfect beaches, but tourists arriving today will be lucky if they find any clear sand to walk on. As swiftly as the sea levels have grown, so too did has the village and its tourism industry, leaving little time for authorities to regulate details such as who builds what and where.

“There was disorder here; people suddenly arrived, they built without licenses and permits, and at one point it fell out of our hands”, says Cindy Cotes, head of the Dibulla Municipality Tourism Office. “Today’s Palomino is not what it used to be a year, two or five years ago”.

In the last three years, over 98 feet of seashore have disappeared due to coastal erosion. Climate change may be somewhat to blame, but a lack of urban planning also sacrificed vegetation for infrastructure. Pools and kiosks now stand where mangroves used to be. Gone is the natural barrier protecting the inner land from rising sea levels.

“To have a solid, wide seafront, both the sea and surrounding rivers must provide sediments,” said Deiver Pinto, an environmental engineer studying the situation. “Usage of land changed [in the area]. You see lots of palm trees and grass at hotels, but the natural micro streams and ditches providing sediment to the beach are plugged”.

Walking through the beaches of Palomino, people run into a line of concrete walls and the debris they’ve left behind. A few hotel owners built them as a way to protect their infrastructure once sea levels rose dramatically in 2020.

On days when the tide is high, walking becomes dangerous, as waves crash hard against the walls, limiting tourists’ beach access.

Camilo Ramirez, a 28-year-old traveler from the capital, Bogotá, remembers the first time he came to Palomino four years ago. There was more than enough space to camp and rest. “You could see lots of mangroves and trees back then, a wide beach to walk through, play sports and hang out. It’s all gone now”.

When Naty Botero, a Colombian pop singer, decided to build her dream house along Palomino’s coastline, there was only vegetation there. Today, her home is also one of the most famous hotels in town, though coastal erosion has hit it hard.

In the past few years, her property has lost 50 feet of land.

“In a few years, Casa Coraje won’t exist anymore. We built these walls because the sea keeps eating everything up, and we’re trying to stop it,” she said.

One of her neighbors, Marta Arellano, owner of eco-retreat La Sirena, holds a different view. Coastal erosion forced her to recede 260 feet of property and tear down two cabins. “They bought water, they lost, now they must move their borders,” she says of her neighbor’s approach.

According to Oliverio Rodriguez, administrator at Hotel Chiniu, local authorities have known about the situation for years, but not much has been done.

In 2019, the association of hotel owners and administrators commissioned an oceanographic study. The idea was to find a proper solution to the problem, but Andres Murillo, the head of the Maritime Direction, says the one proposed is incomplete.

“To them, the magic solution is always to build a seawall, but that’s just one of the many works of coastal protection there are,” Murillo said. Since oceanographic studies rely on a six-month-validity period, no updated researches are available today.

In a recent meeting, Murillo, hotel representatives, and independent advisors reached an agreement. Competent authorities must declare a state of public calamity in the area, commission new studies, and speed up the race for a solution.

For Deiver Pinto, the solution comes down to greater involvement of local authorities and a combination of defense shock works, such as seawalls with green engineering, carvings, and natural dunes.

Meanwhile, tourists arriving in Palomino will have to settle with barely a few steps of seashore to bask on.