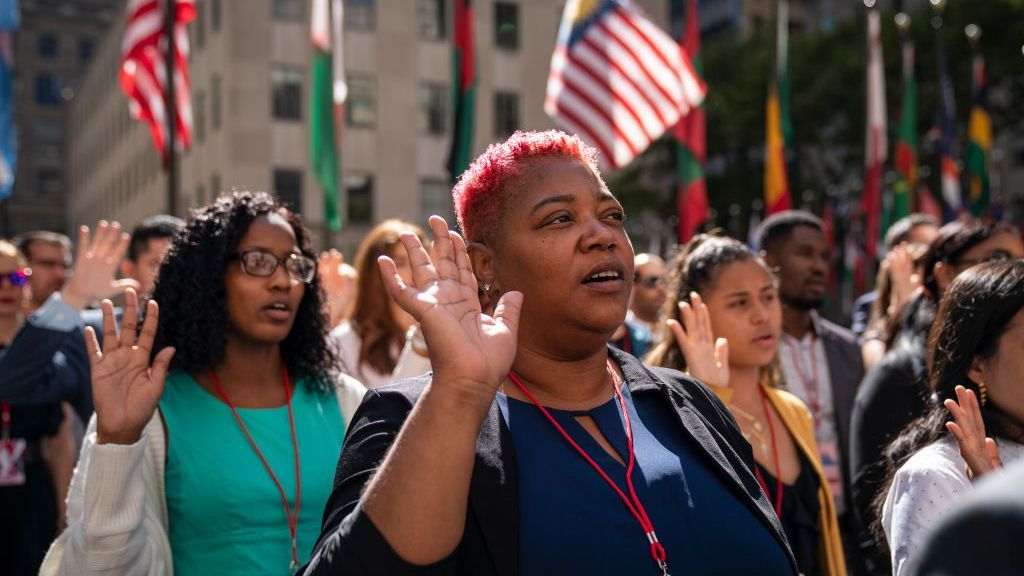 New U.S. citizens recite the the Oath of Allegiance during a naturalization ceremony at Rockefeller Center on September 17, 2019 in New York City. The U.S. business community is pushing for immigration reform to attract more workers and boost the economy. (Drew Angerer/Getty Images)

In a Chamber of Commerce meeting last week, business figures and chamber officials made the case for removing some barriers to immigration in order to bolster the American workforce amid post-pandemic labor shortages. The call harkens back to the Reagan-era GOP position of using immigration reform to boost the economy, but it stands in stark contrast to the nationalist sentiments espoused by former President Donald J. Trump’s supporters.

Party leaders will therefore have to get crafty in handling the issue without alienating either voting block of their base.

“I wouldn’t want to be a GOP leader these days having to juggle that tension,” Thomas Sutton, political science professor and director of the community research institute at Baldwin Wallace University, told Zenger.

“This represents a growing split in the base of the party. On the one hand, you have the business communities — ranging from large corporations to smaller businesses — that are generally represented by the Chamber of Commerce … versus this grassroots, populist, nationalist, anti-immigration, ‘they’re-taking-your-jobs-from-you’ wing of the party represented by Trump.”

“So, the problem is, the Chamber was always a conservative mainstay of the party, and they had been through the period of Trump, and now, they’re sort of getting into this uncomfortable position along with the rest of the business community of maybe going up in a conflict against the Trump supporters,” he said. “How does that play out?”

The Chamber and the heads of several American companies argued that increased immigration is crucial to filling domestic jobs and offsetting steadily declining U.S. birth rates — 55.8 births per every 1,000 women in 2020, according to the Centers for Disease Control and Prevention — and high unemployment — 5.9 percent as of the end of June, according to the U.S. Bureau of Labor Statistics — following the economic fallout of the COVID-19 health crisis.

“America’s future economic growth depends on a growing and predictable population of working-age individuals … to support the retirement and healthcare needs of the current Americans who are living longer,” Andrew H. Tisch, co-chairman of the board and chairman of the executive committee at Loews Corporation, said in the meeting. “When it comes to paying into Social Security, Medicare and Medicaid, the denominator is shrinking while the numerator is growing.”

There isn’t much the government can do in regard to the birth rate decline, Tisch said, but it can “welcome more hardworking immigrants who tend to come here when they are young and work for decades, contributing to the economy and paying taxes.”

Jon Baselice, vice president of immigration policy at the Chamber, added in the meeting that the organization is working with lawmakers on Capitol Hill as well as Department of Homeland Security and Department of Labor officials to find ways to fill the roughly three million available American jobs, according to the U.S. Bureau of Labor Statistics, with immigrant workers.

A similar line of thinking drove former President Ronald Reagan to sign a sweeping immigration reform bill granting widespread amnesty into law in 1986 and is consistent with solutions some immigration experts are proposing today.

“Immigration reform would provide the foundation for future workforce growth and could be tailored to support certain U.S. industries and regions with labor shortages. An aging U.S. population with declining employment rates will allow for significant increases in immigration without generating harmful wage competition,” Randy Capps, director of research for U.S. programs at the Migration Policy Institute, told Zenger. “Expansions of employment-based visas and temporary worker programs could be designed to meet employer needs.”

But it could be difficult to unite the party, as GOP voters stand divided on immigration. Fifty-seven percent of registered Republicans view immigration as a “good thing,” while 39 percent view it as a “bad thing,” according to a recent Gallup poll. However, over a majority believe immigration levels should decrease.

“There is some inherent conflict between the rank-and-file voters in the GOP and business interests over immigration,” Kyle Kondik, managing editor of Sabato’s Crystal Ball at the University of Virginia’s Center for Politics, told Zenger. “Republican politicians are much likelier to espouse hawkish views on immigration now, even compared to the George W. Bush years. Business interests are probably more aligned with Democrats on immigration, but they also are at odds with Democrats on many other issues.”

The interparty dynamics leave GOP leadership with just a handful of options to pursue: Use the Chamber’s endorsement as a way to increase voter support for reform, come to a bipartisan compromise with Democrats on the matter or play it safe ahead of the 2022 midterm elections by doing nothing.

“Having the chamber come out and endorse or support it, they provide some degree of a cover or an element of a shield. If the Chamber supports it, then it has the ‘good housekeeping’ seal of approval,” Peter Bergerson, political science and public administration professor at Florida Gulf Coast University, told Zenger.

The moment could also serve as an “impetus” for Republican leaders to reach some middle ground or compromise with their Democratic counterparts, he said.

Such a deal could include measures like increasing the labor pool by expanding H1-B visas, green cards and other temporary immigration methods. Lawmakers could also strike an agreement on the Deferred Action for Childhood Arrivals policy, which was invalidated by a recent court decision, by providing pathways to permanent residency for the estimated 3.6 million DREAMERS, 57 percent of whom are employed and 37 percent enrolled in school, according to the Migration Policy Institute.

“They might try to play a bipartisan card on this one,” Sutton said. “In other words, craft some sort of an immigration reform bill that focuses on this labor question, that still takes a hard line on getting more money for border control, border security, which is always the compromise.”

But with Republicans looking to regain control of one or both chambers of Congress in 2022, it could come down to the midterm elections. Another factor at play is the former president himself, who has a working relationship with House Minority Leader Kevin O. McCarthy (R-Calif.) and has promised to help the Republican Party’s midterm efforts.

“It really will depend on the degree to which Trump continues to play this anti-immigration card,” Sutton said. “It’s quite possible that he’ll drop it and not see it as an issue that plays to his advantage and that of his supporters. … It may resolve itself, only because he and his followers won’t play the issue, and therefore it will subside.”

However, if Trump — who as president stoked anti-immigration beliefs, expanded immigration detention, rapidly returned migrants to their home countries and advocated for a merit-based immigration plan — comes out in full force against immigration reform measures, Republican leaders may drop the issue for the sake of the party’s and their own political futures.

“Because Republicans are within striking distance, very close in both chambers of retaking majorities, if the Trump voice is strong and comes out against any kind of temporary or permanent immigration reform, they’re all going to walk away from it,” Sutton said. “If he rallies people against any kind of immigration bill, they will leave it alone because they’re so close. They need less than a dozen seats in the House and just one in the Senate.”