People in the southwest Sydney suburb, where there are high rates of Covid-19, have paid hundreds of dollars to be vaccinated.
By Hannah Ryan and Andi Yu July 29, 2021
Facebook
Twitter
Linkedin
Email 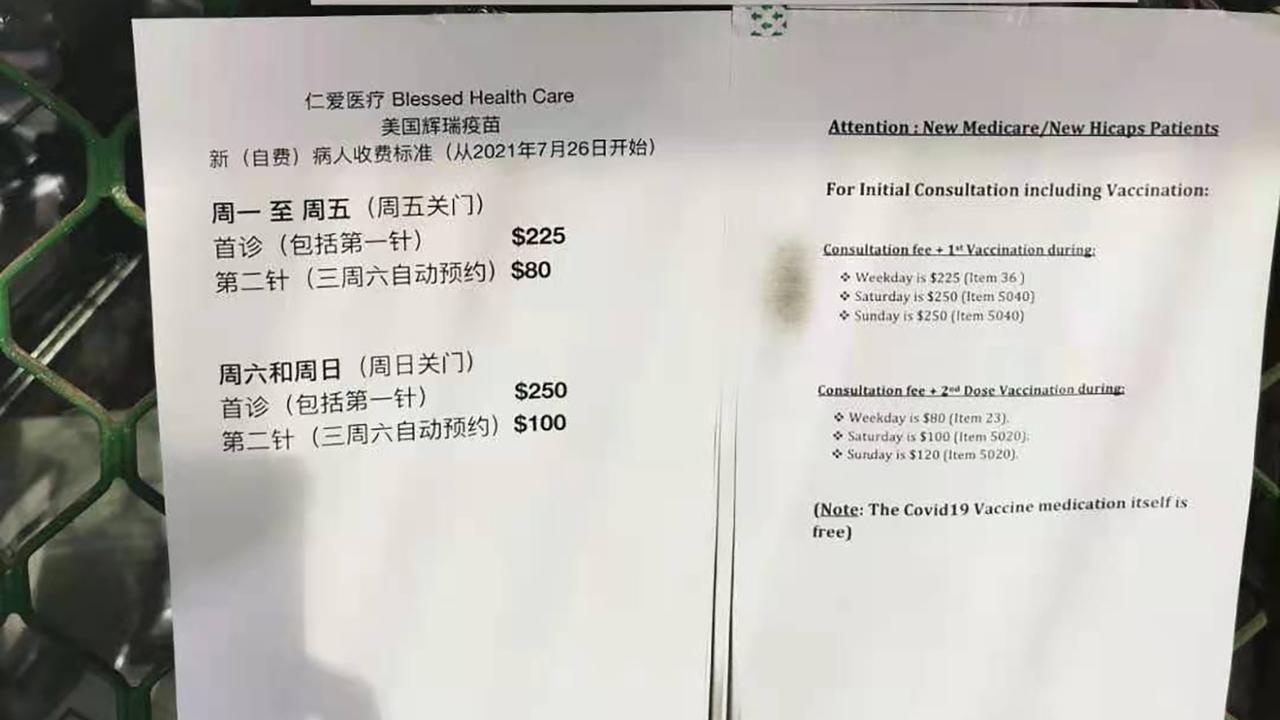 Blessed Health Care in Campsie has been charging patients for the Pfizer Covid-19 vaccine. (AAP Image)

SYDNEY — Residents in southwest Sydney have been charged hundreds of dollars to receive the Pfizer vaccine. Despite government rules, it should be free.

A general practitioner’s clinic in Campsie has been charging for consultations and registration before administering the vaccine.

A woman in her 20s said that she had paid AU$250 ($183) to receive the Pfizer jab from the Blessed Health Care clinic at Evaline Street after queuing up on July 24.

The Malaysian woman, who works as a tiler, said she did not want to wait months to get the Pfizer vaccine given the high virus transmission rates where she lives.

“I wanted to get it quickly, to be safer, so I paid the money,” she said.

The woman is on a bridging visa and does not have Medicare. She said her colleagues, also Malaysian citizens on temporary visas, have been vaccinated in the same way.

She will return for her second dose in six weeks when she will be charged at least AU$60 ($44), she said.

Cumberland councilor Kun Huang said that the issue had been raised in at least three different groups on the Chinese-language app WeChat, with workers from Auburn and Lidcombe contemplating going to Campsie to get the jab.

He has been sent invoices from people who received the Pfizer vaccine at Blessed Health, which show they were charged AU$225 ($165) between July 24 and 26.

The item description is either a “new patient registration fee” or a “Level C Surgery,” a Medicare item for a long consultation.

The Covid-19 vaccine is free for everyone, a federal health department spokesperson said. That includes people who do not have a Medicare card and apply regardless of visa status.

“Clinics cannot charge a patient any cost associated with the administration of the Covid-19 vaccine, including booking fees,” said the spokesperson.

“The Department of Health has made the requirements under the program clear with General Practitioners, and the overwhelming majority are doing the right thing.”

The department’s web page states that the consult appointment for patients to receive the vaccination is free.

A nurse at Blessed Care’s Anglo Street clinic, Jacob Chen, said that the practice could not give the vaccine to new patients without first taking a medical history. Because it is a private practice, it does not bulk bill for the consultation. The vaccine itself is free, he said.

Ben Ang, who works at Evaline Street, said his clinic was serving a marginalized community.

“We are not the villain, and we are the helper,” he said.

The Chinese-speaking construction workers who come to his clinic “cry out for help” because they believe they need to be jabbed for their jobs but struggle to book into vaccine hubs through English-language websites.

Ang said he had been overwhelmed with “hundreds and hundreds” of people turning up as word has spread among the local community.

In just a few days, he has exhausted the vaccine provided for the next two weeks. He called on the government to provide more vaccines to the area.

Sarah, the clinic’s receptionist (who declined to share her surname), said anyone who thought they had to pay for the vaccine was confused. People who do not want to pay fees can go elsewhere, she said.

“We are a private facility, and we need to pay our staff,” she said. “If they do not have Medicare, I cannot provide this facility for free.”

Huang said that the government of New South Wales should conduct better outreach in languages other than English around vaccination, particularly the degree of risks around AstraZeneca.

Canterbury’s member of parliament, Sophie Cotsis, whose electoral office is in Campsie, said constituents had contacted her office about paying for the vaccine.

“No one should be charging to vaccinate the community,” said Cotsis.

“The federal government needs to relay that information to everyone that’s administering the vaccine. In the middle of a pandemic, people who are struggling should not be taken advantage of.”