Research finds long-ago occupants of German caves hunted animals with a hafted leaf-shaped stone point that they thrust into prey. 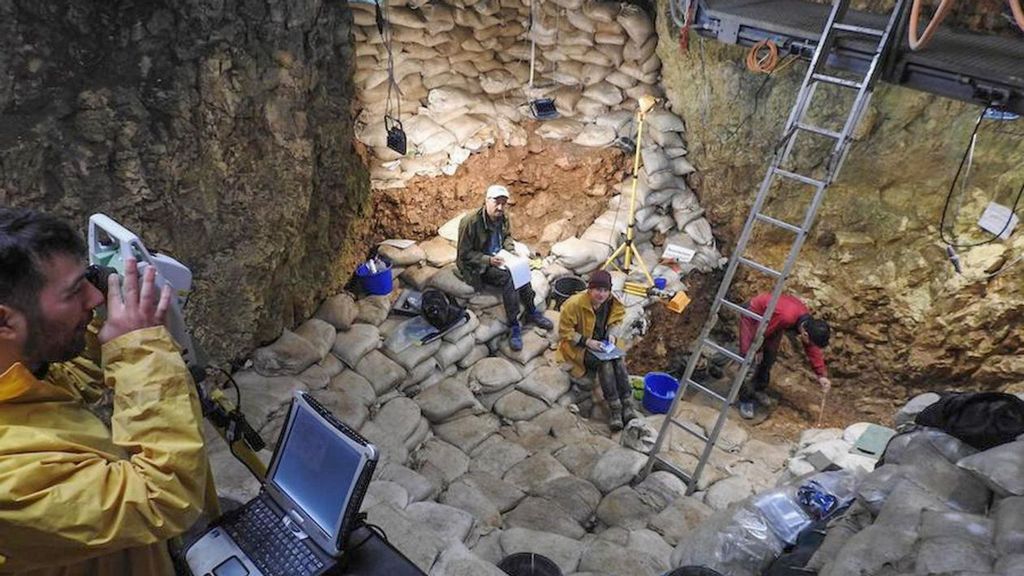 Overview of the excavation in the Hohle Fels Cave in Germany in July 2020. (N. J. Conard, University of Tubingen/Zenger)

A team of German archeologists made a startling discovery when they found a leaf-point stone tool that’s believed to be at least 65,000 years old in The Swabian Jura region, a collection of six caves in southern Germany.

The Museum of Prehistory in Blaubeuren, Germany, presented the artifact as the “Find of the Year” and put on display the stone leaf point from the University of Tübingen’s excavation at the UNESCO World Heritage Site Hohle Fels Cave located in Germany.

The tool — the oldest ever discovered in one of the caves — offers scientists a chance to find more about prehistoric hunting techniques.

The hafted leaf-shaped stone point was used by the Neanderthals from the Swabian Jura mountain region to hunt horses and reindeer, according to a release from the university.

The Hohle Fels Cave, in the town of Schelklingen in the German state of Baden-Wurttemberg, has yielded a number of important archeological finds dating from the Upper Paleolithic through the years. The Upper Paleolithic is also called the Late Stone Age, and began about 40,000 years ago.

The latest artifact was uncovered by a research team led by Professor Nicholas Conard from the University of Tübingen and the Senckenberg Centre for Human Evolution and Palaeoenvironment in Germany.

“The new discovery represents the first time a leaf point has been recovered from a modern excavation, allowing researchers to study the fresh find with state-of-the-art methods. Our results document how the tool was made, used and why it was discarded,” said Conard.

Until now, finds of leaf points were interpreted as belonging to the period between 45,000 and 55,000 years ago, during the last cultural phase of the Neanderthals in Central Europe.

“The new results demonstrate that our assumptions about the dating of the cultural groups of the late Neanderthals were wrong and need revision,” said Conrad.

Veerle Rots, a researcher at Belgium’s University of Liege, conducted a detailed microscopic analysis of the artifact.

Rots said she spotted damage at the tool’s tip that indicates the artifact was used as a hafted spear point, and the spear was likely thrust into prey rather than being thrown.

“Neanderthals were expert stone knappers and knew exactly how to make and use complex technologies combining multiple parts and materials to produce and maintain deadly weapons,” said Rots.

The scientist also said that during the Homo heidelbergensis era, man’s ancestors used sharpened wooden spears for hunting, but these spears lacked mounted stone points like those used by Neanderthals.

Steven Churchill at Duke University in Chapel Hill, North Carolina, and his colleagues Daniel Schmitt and William Hylander conducted a study in 2002 to sustain the two-handed thrust into prey thesis as the only hunting practice of Neanderthals earlier than about 19,000 years ago when the first direct evidence of thrown spears was discovered.

The scientists initially measured the dimensions of a number of Neanderthal shoulder bones. This showed “they are thicker front to back than side to side, which is what would be expected if the bones had adapted to cope with an asymmetric force.“

“Later humans who were known to have used spears had rounder humeri [shoulders], which suggests that throwing a spear distributes force relatively evenly along with the bones,“ said Steven Churchill.

Churchill also said that “using the thrusting technique just once a week would probably be enough to produce the bone deformities seen in Neanderthals. Some models suggest that Neanderthals would have had to kill their favored prey — reindeer, elk, horse and bison — several times a week to support a family.“

Archeologists hail the artifacts retrieved from these excavation sites that are on exhibition at the Museum of Prehistory in Blaubeuren from now until January 2022.

“Hohle Fels is a remarkable site where after 25 years of excavation by the current team, spectacular discoveries from the period of the Neanderthals and early modern humans are still being made,” said Stefanie Kolbl, director of the Museum of Prehistory.