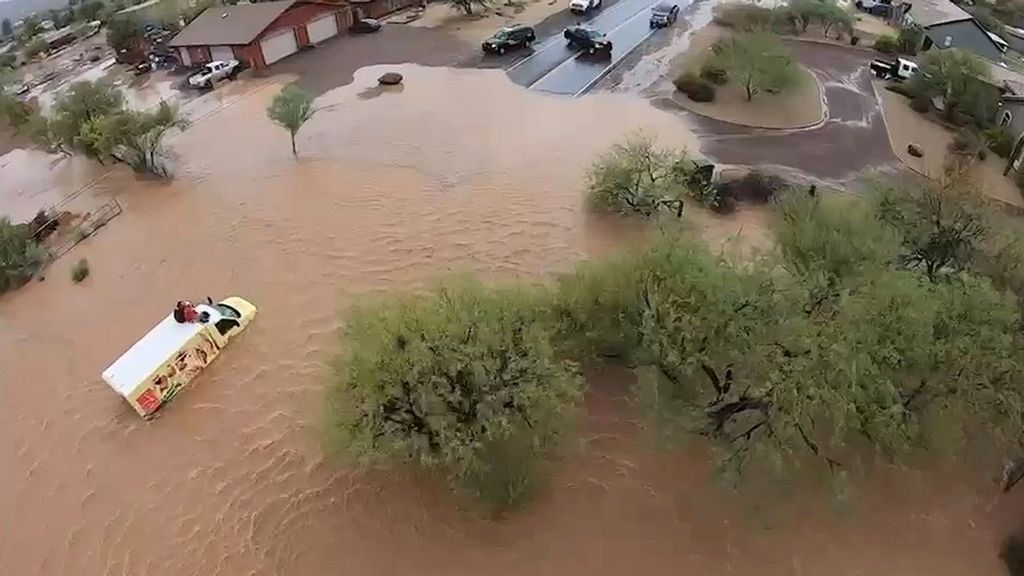 Two people were stranded by a flash flood on top of their truck in Arizona on July 23, 2021. (@MCSOaz/Zenger)

Police rescued two men trapped on the roof of their van due to severe flash flooding during a monsoon in Arizona and airlifted them to safety in a helicopter.

The rescue operation conducted by the Maricopa County Sheriff’s Office was filmed on July 23.

“We are here to provide safety to our community but please be mindful of the dangers posed by moving water and entering flooded areas,” the sheriff’s office said in a statement.

“Please do not attempt to enter flooded areas even though you think your vehicle can handle it. Chances are it may not.”

In the video, the police helicopter approaches the pair on the roof of their stranded van.

The vehicle, which appears to be a delivery van, stopped working shortly before it reached higher ground. The two men were left stranded in the muddy water until emergency responders arrived.

By the road, two police cars stopped any other drivers from attempting to enter the flooded section area.

The two trapped men remained seated on top of the van as the helicopter approached and then slowly climbed onto the railing and then on board.

Weather alerts lasted through the weekend and officials only began lifting them Monday. Flash flooding was particularly bad in areas that have been hit by wildfires.

Monsoons can occur when moisture meets extreme heat. According to the Arizona Emergency Information Network, this can lead to heavy rain, lightning, dust storms, high winds, and flash floods. The monsoon season in Arizona runs from mid-June through the end of September.

For drivers who find themselves in monsoon conditions, the Arizona Department of Transportation recommends getting to a safe area as far off the roadway as possible and waiting for rain or dust storms to pass before moving through an area. Even if the water does not look deep, just a few inches of running water could pose a serious risk.

The flash floods in the region inundated drainage systems and carried an excess amount of debris, according to a statement by the U.S. National Weather Service.

They also advised that while warmer and drier weather would return to the area by Wednesday, another wave of low pressure could bring more shower and thunderstorm activity.

Meanwhile, cleanup work is underway, including removing trees and other debris swept along by the flooding.