Driver reverses 82-foot truck in order to dunk a tied-on tea bag into a glass of hot water for the "tea-bag challenge."
By Arian Movileanu July 28, 2021
Facebook
Twitter
Linkedin
Email 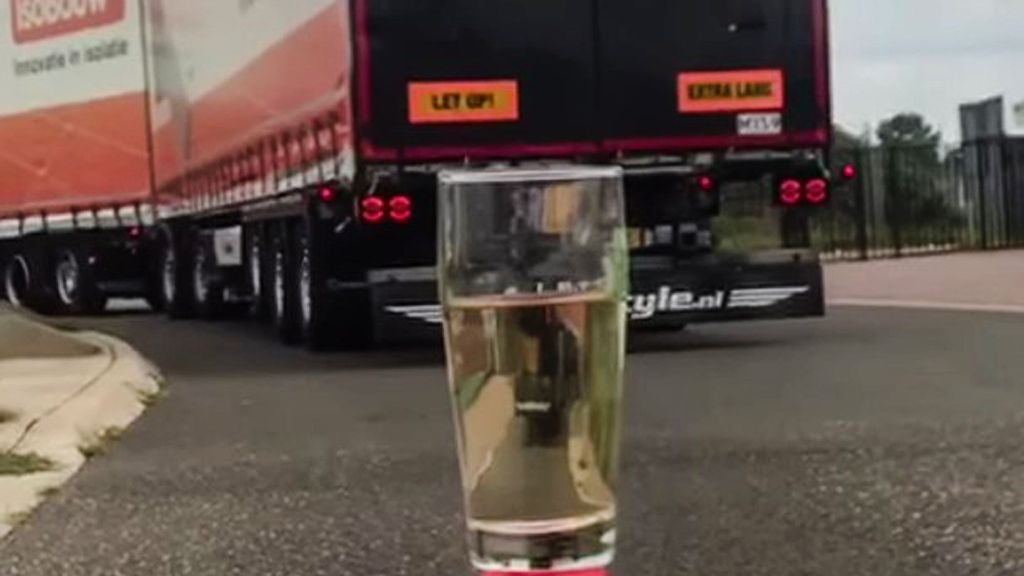 Dutch truck driver Johan Groteboer participated in a popular, informal tea-bag challenge. He demonstrates how to make tea with the help of his big rig. (Johan Groteboer/Zenger)

A Dutch driver who maneuvered a large truck in order to drop a tea bag into a glass of hot water has become a sensation on social media.

He is now getting global “friend” requests.

Johan Groteboer, from Rijssen, Netherlands, said he made the video with a friend as a joke and was “completely stunned” after he posted it and awoke the next day to find thousands of comments.

“I had friend requests from China, Japan, Austria, Italy and Norway. I am still stunned at the reception, but I must admit it’s getting a bit out of hand now,” Groteboer said.

The video shows the 82-foot vehicle reversing until the tea bag hanging from it lines up above a glass of hot water sitting on a traffic cone. Then the suspension is lowered, dropping the tea bag into the middle of the glass.

He said he had decided, as a bit of fun, to take part in the “tea-bag challenge,” which originated in Finland and is popular with truckers.

One reason for the video’s popularity is that Groteboer drives an LHV — a long heavy vehicle, making the task more difficult.

“It is one of the largest vehicles on the road. I guess that’s why the video is so popular,” he said.

“I had to pull out all the stops to really get past the traffic cone without disturbing it and yet still drop the tea bag directly into the hot water,” Groteboer said. “In that scenario, you only have to go very slightly off track, and you lose it.”

He was most amazed that he managed to succeed on the first attempt. Even his wife, Anjo Groteboer-ten Dam, was skeptical, refusing to allow him to take a glass from home because she was convinced he would break it.

Instead, he grabbed a few glasses he bought at the local flea market.

Groteboer, who has been a trucker for 30 years, says it is the best job in the world.

“The freedom that you have is wonderful, and you go to some crazy places. The other day I had to reverse 1.5 kilometers [0.93 miles], so you can’t say this job isn’t challenging.”

Asked if completing his tea-bag challenge on the first attempt also involved luck, he smiled and said: “Not at all. It was pure talent.”