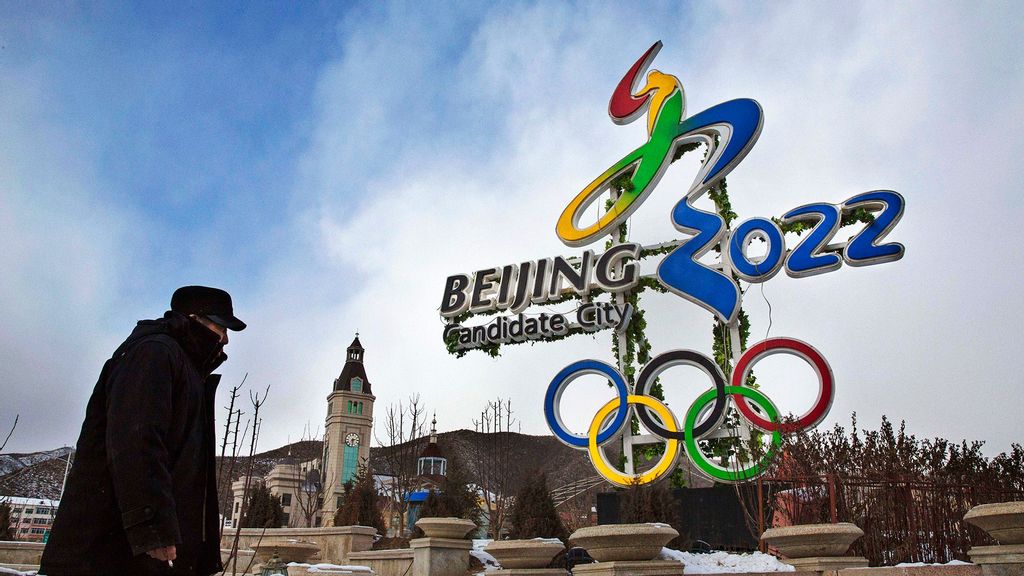 A Chinese man walks by a sign for the 2022 Olympics on January 22, 2016 in Chongli district, Hebei province, China. (Kevin Frayer/Getty Images)

WASHINGTON — A group of United States lawmakers on July 27, 2021, urged corporate sponsors to back out of the 2022 Beijing Olympics over human rights violations in China’s Xinjiang province.

United States Congressmen invited the representatives from domestic firms who sponsor the Olympics to a hearing to address how they could leverage their influence to insist on concrete human rights improvements in China.

Senator Jeff Merkley, chair of the Congressional-Executive Commission on China (CECC), in his opening remarks said the hearing was not meant to attack or embarrass individual companies but rather to explore how key Olympic movement stakeholders, corporate stakeholders, could use their influence to ensure the Olympics live up to its values.

“Holding the 2022 Winter Olympics in China and allowing its authoritarian government to reap the rewards in its prestige and propaganda of hosting this globally-beloved event does not uphold the Olympic spirit,” Merkley said.

“Unless things change quickly, the Beijing Games will be held under a cloud as well — a different cloud, of genocide, crimes against humanity, gross violations of human rights and denial of religious freedom,” Representative James McGovern said.

“As US-based Olympic sponsors, your companies represent America on the world stage. We ask whether you are willing to stand up for universal values and use your leverage against genocide and crimes against humanity.”

The hearing comes a few days after a group of United States lawmakers had called on the International Olympic Committee (IOC) to postpone the Beijing Winter Olympics and relocate the games unless China ends the ongoing “genocide” against Uighur and other minority groups.

Senator Merkley and Representative McGovern, released a letter on July 23, 2021, to Thomas Bach, President of the International Olympic Committee (IOC), asking him to postpone the 2022 Winter Olympics and to relocate them if the host government does not end its “egregious human rights abuses.”

The letter said that no Olympics should be held in a country “whose government is committing genocide and crimes against humanity.”

Several countries, including the United States and the United Kingdom, recognize that Beijing is carrying out genocide against Uighurs and other ethnic minorities in Xinjiang. Despite mounting evidence, China continues to deny genocide and has described the camps as vocational training centers.

The United States had protested the Soviet invasion of Afghanistan in 1979 by boycotting the 1980 Summer Olympics in Moscow, Russia.

The Tokyo Olympics were postponed a year due to Covid-19, but the Beijing Olympics will be held as scheduled earlier.

This is China’s first time hosting Winter Olympics. The country had earlier held the 2008 Summer Olympics in Beijing.