US Excited To Expand Partnership With India: State Department Spokesperson 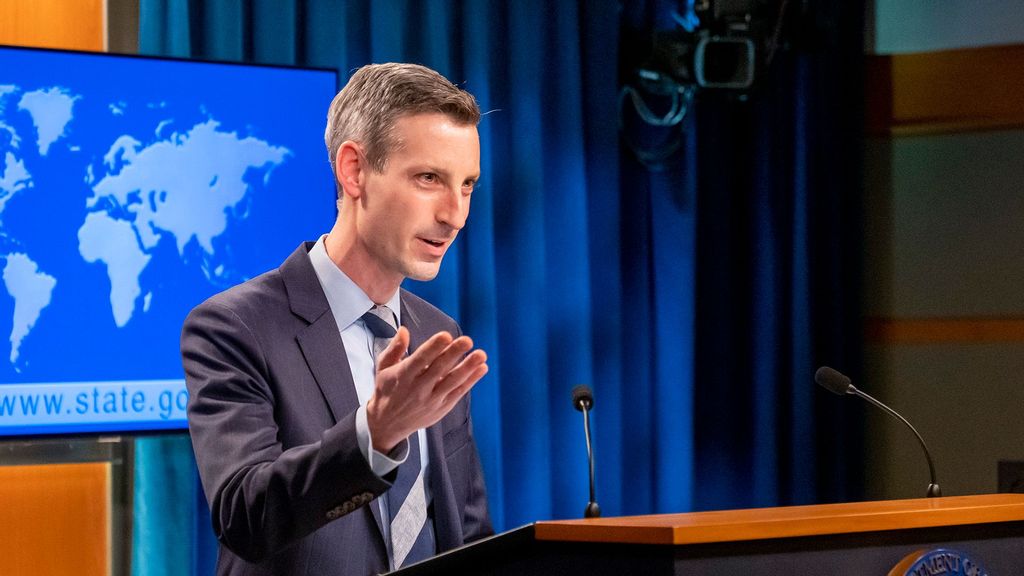 Ned Price said that America is excited to expand the strong and growing India-US partnership. (U.S. Department of State/Flickr)

“Secretary Blinken is wheels down in New Delhi for meetings with our Indian partners,” Price tweeted. “We’re excited to expand the strong and growing US-India partnership.”

“The United States and India are working together on so many of the most important challenges of our time and ones that are having a profound impact on the lives of our citizens,” Blinken said.

“The partnership between the United States and India is vital, it’s strong, and it’s increasingly productive.”

Blinken will be discussing bilateral relations, regional issues, including Afghanistan, Pakistan-sponsored terrorism, Indo-pacific, among other problems with Indian officials.

He talked to Nepal’s new Prime Minister, Sher Bahadur Deuba, and discussed the advancement of the United States-Nepal partnership.

“I had the pleasure to speak with Nepali Prime Minister Deuba today. We discussed the advancement of the U.S.-Nepal partnership, including cooperation on our shared fight against Covid-19 and the effects of climate change,” Blinken tweeted.

Blinken’s visit to India will reaffirm the United States’ commitment to strengthening partnership and underscore cooperation on the shared priorities, as per a statement from the United States Department of State.

The United States supports India’s emergence as a leading global power and vital partner to ensure that the Indo-Pacific is a region of peace, stability, and growing prosperity, and economic inclusion said the statement.

The United States and India signed an agreement in 2008, making India a full partner in the governance and funding of the Fulbright Program.

Both the countries are working on expanding cooperation in international organizations. The United States welcomed India joining the United Nations Security Council in Jan. 2021 for a two-year term.

India hosted the third 2+2 Ministerial Dialogue in Oct. 2020, and the United States looks forward to the next 2+2 later this year, said the statement.

Moreover, India is a leading global power and a key United States partner in the Indo-Pacific and beyond. At the inaugural Quad Leaders’ Summit in March, US President Joe Biden and Modi joined their Japanese and Australian counterparts in pledging to respond to the economic and health impacts of Covid-19, combat the climate crisis, and address shared challenges, including in cyber-space, critical technologies, counterterrorism, quality infrastructure investment, humanitarian assistance, and disaster relief, and maritime security, the statement added.

United States-India defense cooperation is reaching new heights, including through information sharing, liaison officers, increasingly complex exercises like Malabar, and defense enabling agreements, such as Communications Compatibility and Security Agreement (COMCASA). As of 2020, the United States has authorized over $20 billion in defense sales to India.

Through the United States-India Defense Technology and Trade Initiative, both the countries work together on co-production and co-development of defense equipment.

The United States and India are also closely coordinating regional security issues, such as Afghanistan, read the statement.

Further, the United States has contributed more than $200 million for India’s Covid-19 relief and response efforts since the pandemic began, including more than $50 million in emergency supplies and training for more than 218,000 frontline health workers on infection prevention and control, benefiting more than 43 million Indians.

At the Leaders’ Summit on Climate in April, President Biden and Prime Minister Modi launched the United States-India Climate and Clean Energy Agenda 2030 Partnership to strengthen cooperation on solid actions in the current decade to meet the goals of the Paris Agreement and to help each country achieve its respective climate and clean energy goals.

The United States also seeks further cooperation with India on tackling the climate crisis and rising global ambition ahead of the 26th United Nations Climate Change Conference of the Parties (COP26) in Glasgow, United Kingdom, in November.