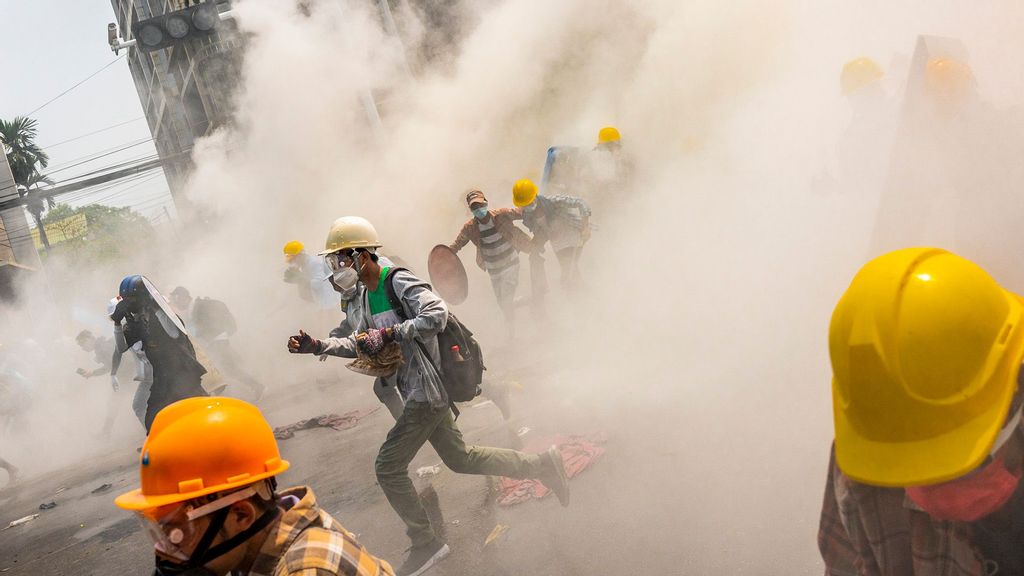 Anti-coup protesters react after riot police fired tear gas to disperse them on March 02, 2021 in Yangon, Myanmar. Myanmar's military government has intensified a crackdown on protesters in recent days, using tear gas and live ammunition, charging at and arresting protesters and journalists. At least 18 people have been killed so far, according to monitoring organizations. (Hkun Lat/Getty Images)

“Myanmar’s junta has made the mass arrest of journalists and control over the media a key component of its seizure of power from a democratically elected government,” said Phil Robertson, Deputy Asia Director of the Human Rights Watch.

“The junta’s intensifying surveillance, harassment, and detention of journalists are rapidly turning Myanmar into one of the region’s most dangerous places to be a journalist.”

The organization released a video explaining the brutalities being faced by media in Myanmar.

A Human Rights Watch report said that Myanmar’s junta had arrested 98 journalists since the Feb. 1, 2021, coup. Out of the total, 46 are currently in detention.

Meanwhile, six journalists have been convicted, including five for violating section 505A of Myanmar’s penal code, a new provision that makes it a crime to publish or circulate comments that “cause fear” or spread “false news.”

“Fake news” appears to be any news that the authorities do not want to reach the public.

On June 30, Myanmar’s Ministry of Information issued a warning to journalists to stop describing the military-appointed State Administration Council as a “junta” or face prosecution. It also warned foreign news agencies to cease using the terms “military council” or “military junta” and to stop “disseminating false news to global people.

The order said that “action will be taken against them under the existing laws if they apply wrong usages, quote and exaggerate fake news, and disseminate false information.”

The rights group said that the crackdown on journalists is part of the junta’s larger effort to suppress independent media coverage of the situation in Myanmar and to deny the serious rights violations the military is committing across the country.

The military cried foul that the elections were marred by widespread fraud, as per a media report. The nullification is being considered as a prelude to a dissolution order for the formerly ruling party.

The Aung San Suu Kyi government was toppled by the military just hours before the newly-elected lawmakers were supposed to be seated in parliament on Feb. 1. After the coup, Myanmar’s military-appointed election commission to look into the results of the election.

The commission said that the National League for Democracy exploited coronavirus-related restrictions to its advantage and attempted to grab power by obstructing the activities of the other political parties. The military later announced that the previous elections would be nullified and new elections will be held.

The election commission said that in all 315 townships where voting was held, a total of over 11.3 million cases of fraud had occurred, including voter list irregularities, as per a media report.

Following the defeat of its affiliated party — the Union Solidarity and Development Party, in the November elections, the military demanded that suspected election fraud be investigated.

The military said it mounted the coup because the then ruling National League for Democracy-led government did not listen to its calls.