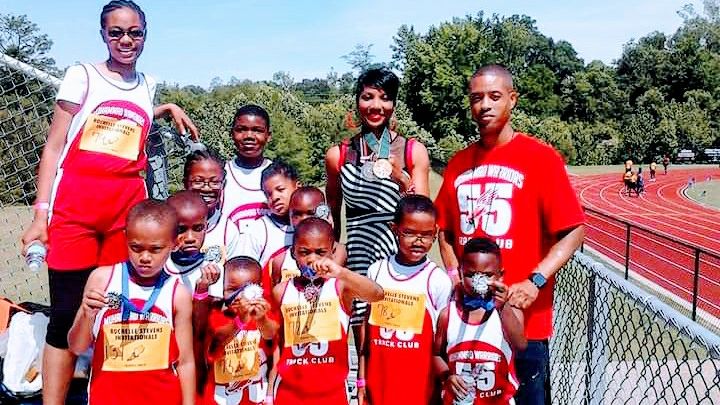 She was not only ready, but focused — just like she was when Team USA walked into the stadium in Atlanta for the 1996 Summer Olympics. Historians say the women’s 4×400 relay was one of the greatest moments of the 1996 track and field events.

“It was the proudest moment of my life to represent Team USA,” said Stevens. The team won gold in the relay, in which Nigeria was the favored nation.

Stevens was also part of the team that won a silver medal in the 1992 Summer Olympics in Barcelona Spain, though they were considered the underdogs in a field of 15 contenders.

“I had to do my best because there was no room for excuses, no cramps because of dehydration. No false starts. I had to go hard because you are racing the best people in the world,” Stevens said.

Decades later, Stevens is an ambassador for the sport, whether she’s a running a track camp for children in Memphis or speaking at her alma mater, Morgan State University, where she holds many of the women’s track records.

She also has a foundation that helps young athletes and raises money for scholarships.

Stevens’ mother, Beatrice Holloway-Davis, a pastor in Memphis, says she was her daughter’s best coach.

“First of all, she started in church. With my four daughters, I talked to them a lot about the Lord and about life in general, I tried to prepare them for life, the disappointments and the victories,” Beatrice Holloway-Davis said.

Tommy Washington, a childhood friend and a college track star, said Stevens always showed up ready for a run when they were growing up in Memphis.

In high school Stevens won many records, and at Morgan State University she still holds the records she set in 1987 in the 100, 200 and 400 meters. School officials are planning to name the stadium track after her.

Stevens graduated from Morgan State University in 1988, but failed to quality in the Olympic trials that year. That just spurred her motivation.

“My motto became ‘no pain, no Spain,’” Stevens said, referring to the 1992 Games in Barcelona. “The athletes striving to be the best are about dreams that don’t come true unless you work for them.”

“There are lots of kids in the inner city who don’t have the support,” said longtime friend Washington. “Rochelle is always giving back. A lot of us didn’t have a lot. I grew up in North Memphis in the projects. But people gave us a lot, and I ran four times a day. Rochelle would come over and say, let’s go running.

“Today, the kids believe in what they see. In my day, we believed what we heard…,” said Washington, who became a track star at Arkansas State and now runs the Memphis Thoroughbreds track club.

Stevens started a new track and field combine in June.

“More than 30,000 inner-city youth have taken part in our track meets and programs [overall],” she said.

“My goal is to be able to motivate and inspire the next generation of athletes through academics,” said Stevens, who holds a doctorate in Christian education.

Before the 1996 Games, her mother said, Stevens trained in Florida. While they were there, they met a bishop from Nigeria at a church service and asked for prayer.

Each relay runner had to run a lap. Stevens started the race, and Olabisi Afolabi from Nigeria pulled out in front.

Maicel Malone brought Team USA into second place, and on the third lap, Kim Graham ran past Russia’s Yekaterina Kulik and separated from the pack to hand off to anchor Jearl Miles with a 4-meter advantage.

Nigeria’s Ogunkoya’s gained ground on the anchor lap, but Miles shifted to lane 2 and held on for the team’s victory.

The four women celebrated by wrapping themselves with the American flag. That moment was unforgettable, Stevens said. “I got a chance to win for my country in front of a crowd of 85,000 people.”