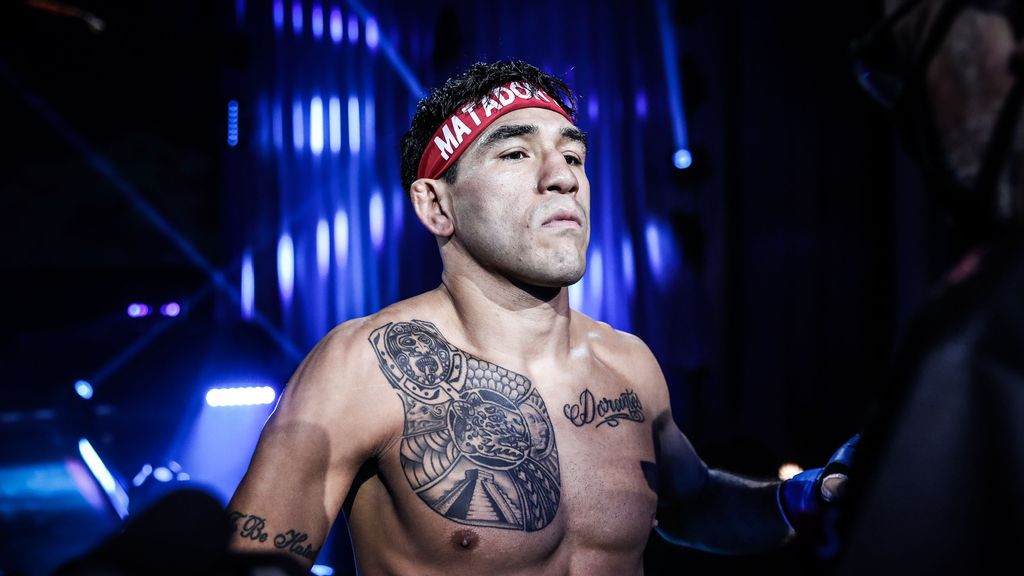 Sanchez returns to the Bellator cage on Saturday night for the first time since his April loss to “Pitbull.” His mixed martial artist opponent this time is Mads Burnell, whose six-fight winning streak will not make it easy for Sanchez to get back in the win column.

Sanchez plans to use the experience of those two title fights to hand Burnell his first loss since 2018. Sanchez enters the cage with a 20-5 record; Burnell’s stands at 15-3. Sanchez vs. Burnell can be seen live Saturday on Showtime.

Zenger caught up with Sanchez in the days before the match to discuss the fight, his motivation and much more.

Zenger: How has preparation for this fight gone?

Sanchez: I’m just ready to rock and roll. Take care of business and steal the show.

Zenger: I’m sure it always feels a little different when you’re coming off a loss. Has that enhanced the motivation?

Sanchez: That’s a great way of putting it. Fighting for the title and losing, that was devastating. But I can’t let it keep me down, man. I can’t stop, and won’t stop until I’m all the way at the top. I can only use that as motivation and experience. This is a whole new chapter for me, and I am a complete and dangerous fighter. You’re going to see that on Saturday.

Zenger: Burnell is a tough opponent, so you really don’t have time to have a pity party for yourself. I think he’s the perfect type of opponent to push you.

Sanchez: Yeah. I expect him to come get it, too. Any guy on that list wants to be at the top. That’s the only reason you should be fighting. This is my climb up the ladder. I want to prove that I am the best guy on that rankings list. It’s a long bumpy road, but I’m excited to go out and take out another guy who is on that list as well.

Zenger: Given your fighting style and knowing what Mads will bring to the table, what type of fight stylistically are you expecting on Saturday night?

Sanchez: I think we can see a little bit of everything. I’m going to come out on top no matter where it goes. He has more wins by submission on his record, that’s great and all, but I know I have that on a much higher level. I like his style, I like what he’s got, and what he brings to the table. That’s why this is a favorable matchup for me. This really excites me. Even if it was any other guy on that list, it excites me because I know they are going to come in and try to bring it. They want to prove that they’re better in some area than me, and I want to prove otherwise.

Zenger: Following your journey on social media, it seems like you are spiritually in sync right now. Is this something new, or has it always been there and you’re just expressing it more?

Sanchez: I think it’s something that I’ve always had. I guess with the times, and COVID, and the way the world has been, I think it’s just something I want to express more. There’s obviously more to life than fighting. It’s not even something that I’m going to be able to do forever. I’m just enjoying what I have now and what I’m able to do now, and I’m blessed. I’m so grateful that I am on this stage, that I have this platform, and I get to take on all of these great fighters from all over the world. My story is glory and I give all the glory to the great God above because I’m blessed and fortunate to be having fun with this while I’m able to do it before my time is up.

Zenger: Bellator has always provided amazing platforms to showcase the talent of their fighters. To have the Showtime backing and be able to garner so many new fans through it, what has that been like?

Sanchez: It’s been incredible. I’m going on my seventh year with Bellator. We’ve had Spike TV, Paramount, DAZN, CBS and now Showtime. This is our new home and I love it, man. I’ve been watching all of these fights. It doesn’t matter if the guy is in my division, female fights, whoever. I love watching Bellator on Showtime. They are showcasing some of the best fighters in the world and putting on great fights. It’s all been at the Mohegan Sun Arena [in Uncasville, Connecticut] recently, but now we’re back on the road, and that is going to continue with things opening up. It’s going to be nothing but exciting things for Bellator.

Zenger: You faced the best in the division twice in Patricio “Pitbull” Freire. Although you came up short in those fights, what did you learn about yourself during the course of those five-and-a-half rounds?

Sanchez: It definitely felt better losing the decision the first time. We come up short sometimes. I’m going to bring it up — I’m a Chicago Bulls fan till I die. I was raised in the Midwest and that’s what I got. Watching “The Last Dance” during COVID and hearing Michael Jordan talk about how many times he came up short just to make it to the playoffs or the semifinals and even the finals, hearing his road and the struggle …  that’s how it is, man. You gotta change. Getting that kind of in-depth mindset. And not just Michael Jordan and “The Last Dance,” but Kobe [Bryant] and other athletes.

You can use any sport where you have seen guys overcome adversity and not get what they want and work so hard for the first time or even the second and third time. You can never give up. You can’t quit. You gotta keep going forward and being better. You have to use that as motivation and fuel because staying where you’re at or accepting it and not wanting to grow from that is not an option.

Arnold Schwarzenegger said it best, “Pain is a part of growing,” and growing is what I want. For me, pain is a pleasure. I’m only going to use these losses and fuel to make me a much more versatile, dangerous, experienced and hungry fighter. I’m anxious to show how dangerous and how lethal I am and what I can really do. I’m looking to show my full potential against Burnell.

Zenger: You obviously have to take care of business on your end first, but you will be a very interested spectator for Saturday’s main event, “Pitbull” defending his belt against A.J. McKee. Any pressure on you to look a certain way in your fight because you’re first up?

Sanchez: It’s fuel to me. I wanted to be on the same card just in case someone was to get injured or something, I would be there to step in and would have done so easily. I also want a victory over “Pitbull,” title fight or non-title fight. Whoever comes out victorious out of this, of course I want to fight them, but even the one who doesn’t win, I want to fight them too. I’ve been scheduled to fight McKee, and that’s the only fight I’ve ever had to pull out of.

In the future, those are fights that I know I want, but first things first — Mads Burnell. I want to prove to Burnell, the world and the rest of my division that I’m not going anywhere. Or, more precisely, the only place I’m going is to the top. They got these guys coming after me in the main event and let’s see what happens, and what the plans are after that. I want to showcase my skills and cement my status on Saturday night.

Zenger: What did you learn most about yourself in 2020?

Sanchez: I just really had to be honest with myself in every area, as a man, as a fighter and a human being. You mentioned it, really growing in my faith and spiritually, as well. Having a lot of time to think, meditate, pray … I really got lost in that. I wanted to be into something positive, seeing that everything was closed and the world was in chaos. I wanted to get lost in nature and get right with God. Living my life peacefully in harmony, and even with things going horribly, my fight getting canceled and things shutting down, all this craziness that was going on in the world, everything was still good for me.

I was scared. I didn’t fight, so I thought, how am I going to pay bills? How am I going to get my taxes done? Am I going to fight this year? What’s going to happen with this Grand Prix? Everything happened the way it did, here we are now, and nothing but positive is going to come from everything that we learned throughout 2020.

Zenger: Good luck to you, thanks for your time, and I can’t wait to watch you fight on Saturday.

Sanchez: Peace and love, God bless you all, and Hakuna Matata. Enjoy the fight on Showtime — I’m going for that first or second round TKO.