In the middle of new infections, tourists have found a warm home in one of Mexico’s poorest states.
By Julio Guzmán July 28, 2021
Facebook
Twitter
Linkedin
Email 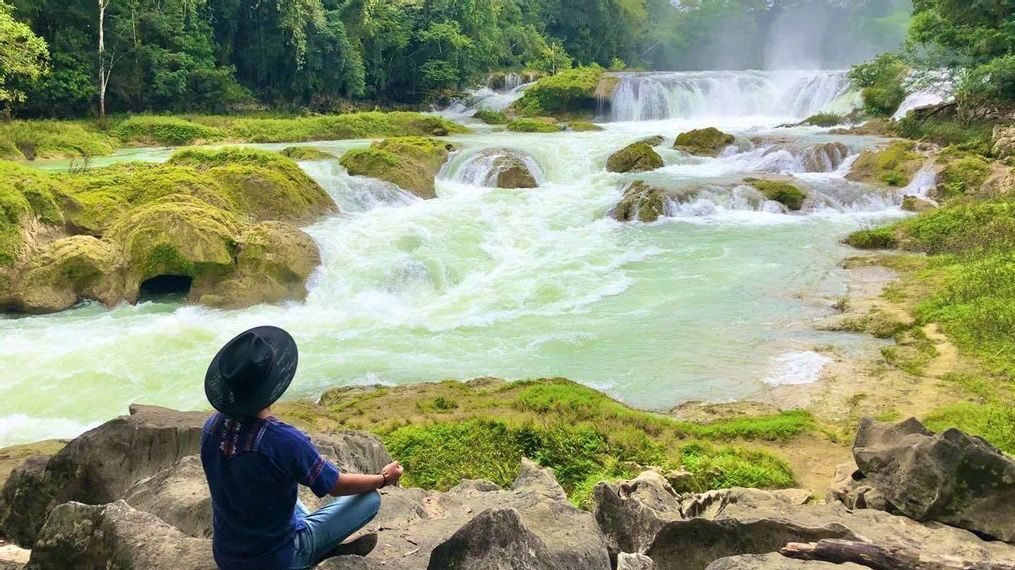 The many ecotourist destinations, as well as the archaeological ruins and other tourist sites are open in Chiapas, despite the pandemic. Pictured in the image is the Las Nubes waterfalls, near the border with Guatemala. (Julio Guzmán/Zenger)

While the Mexican Government has recognized the country is experiencing its third COVID-19 wave, Chiapas has become an oasis for many. The state has done all it could to introduce a new normality.

The southeastern Mexican state has reactivated a large part of its activities and, under the corresponding sanitary measures, public establishments such as plazas, gyms, restaurants, and bars can operate regularly. It has also opened most of its tourist places, which has made it one of the ideal locations for national and international vacationers.

Jonathan Hernández, a Mexican tourist who has been living in San Cristobal de las Casas for several months, says he has “been touring through various places, such as the jungle, the forests, as well as the most crowded places.” He uses his face mask, hand sanitizer and sanitary measures as anytour or public transport demands.

Despite being the most impoverished state during the last decade, according to the National Council for Political Evaluation of Social Development (Coneval), Chiapas is rich in natural resources and tourist attractions.

Paula Mosa, a Spanish visitor, said unlike her home country, she has lived a life free of restrictions in Chiapas. “It is a good place to be. The pandemic has been extremely mild here. That’s unlike places such as Mérida (Yucatán), where there is a curfew after 10 p.m., the bars close down, and tourists are unable to do anything. So it is a good place to live, with more relaxed regulations,” she said.

Practically all tourist places in the state enable health and security measures. It is possible to book tours in the magical towns of San Cristóbal de las Casas, Chiapa de Corzo, Palenque, and Comitán de Domínguez, as well as visit the various beaches, lakes, ecotourism parks and waterfalls.

The Sumidero Canyon National Park, one of Chiapas’ main attractions and among the most imposing and important canyons in Mexico, is operating normally. So are the scenic viewpoints, which had been closed for several months.

Similarly, the sites of Yaxchilán and Bonampak are operating normally, and in the latter, two of the three Mayan vaults are open to the public.

However, given the incoming holiday period, health personnel fear the number of infections will increase, derived from the vaccination lag the state has experienced. Only 18 percent of Chiapas’ population has received the vaccine, compared to the national average of 38 percent.

“I really don’t think we are ready. My former colleagues have told me there is not enough material to work with and, as such, they can hardly do their usual responsibilities,” said Lethanie Pegueros Selvas, a nurse at hospitals in Chiapas.

Given the lack of vaccines, the federal government has sent 300,000 vaccines from the AstraZeneca and Cansino laboratories. However, according to the Mexican Social Security Institute (IMSS) general director Zoé Robledo, it is expected that 50,000 daily doses will be applied in a “safer, more efficient, and faster manner.”

Translated and edited by Mario Vázquez; edited by Melanie Slone and Fern Siegel