The Dixie Fire has been burning since July 14 and is only 23 percent contained.
By Joseph Golder July 27, 2021
Facebook
Twitter
Linkedin
Email 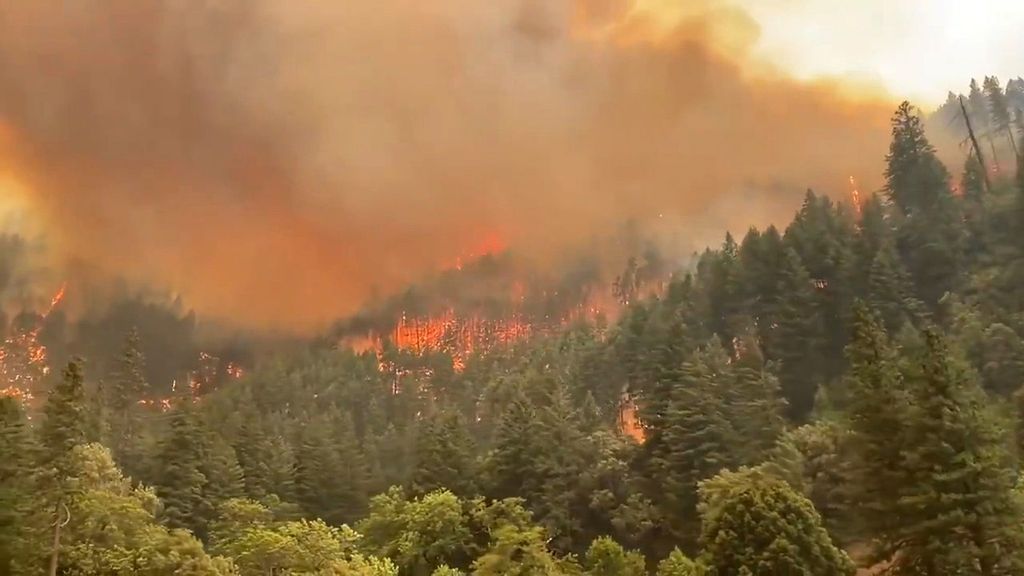 View from a tanker over the Dixie Fire in Montecito, California. (@montecitofire/Zenger)

California’s largest wildfire, the Dixie Fire, had consumed 208,206 acres as of Tuesday, when it was 23 percent contained, according to the California Department of Forestry and Fire Protection (Cal Fire).

Homes and other properties have been destroyed, and communities in the vicinity have been evacuated. Cal Fire said more than 10,000 structures in Butte and Plumas counties are under threat.

The fire department said 5,000 firefighters are tackling the wildfire, which started at midnight on July 14.

The blaze “continues to burn in a remote area with limited access, and extended travel times with steep terrain are hampering control efforts,” fire officials said.

The wildfire crossed highways 70 and 89 on Saturday, roaring through the town of Indian Falls in Plumas County. Structures burned in nearby Paxton.

Cindy Pierson, who was forced to evacuate the town of Quincy in Plumas County, said she is “very anxious” about the fire.

“It’s scary,” said Pierson, who has lived in Quincy for three months. “I’ve never been through anything like this. I want to come home as soon as possible, and I want there to be a home.”

“You pray that the wind goes the right way, but when it turns, you’ve just got to be prepared to move and get ready to go,” said resident Henry Riel.

Gov. Gavin Newsom on Friday declared a state of emergency in Alpine, Butte, Lassen and Plumas counties due to the Dixie Fire, which merged with the smaller Fly Fire and the Tamarack Fire.

The Tamarack Fire on California’s border with Nevada has destroyed at least 66,000 acres. The fire started as a lightning strike in the Mokelumne Wilderness and was reported to be 45 percent contained as of Tuesday.

The National Interagency Fire Center reported that as of Monday, “79 large fires have burned 1.5 million acres in 12 states. More than 21,000 wildland firefighters and support personnel are assigned to incidents across the country.”

Police started escorting families back to their homes on Sunday to retrieve important items and pets in El Dorado County, where the Hotchkiss Fire burned in June.

Many wildfires are burning across the western United States, which is experiencing extremely dry conditions and heat waves, making it difficult to contain or extinguish the blazes.