There Are Endless Varieties Of Chilaquiles, With Mexican States Boasting Regional Specialties

Their origin is unknown, but the dish is a favorite at any time of day.
By Luz Carmen Meraz July 27, 2021
Facebook
Twitter
Linkedin
Email 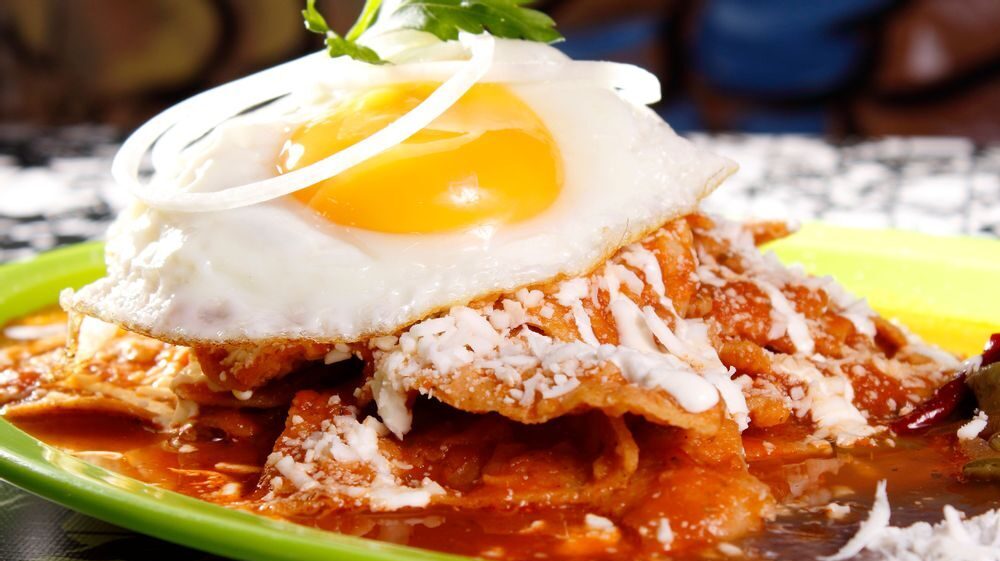 This Mexican dish can make the worst hangover lighter. The spicier it is, the more effective.

Chilaquiles is a basic but seductive delicacy: fried corn tortilla chips bathed or dipped in a broth salsa, seasoned with herbs and the personal touch of each family or restaurant.

Chilaquiles may have different colors, but the traditional ones are green or red, served with shredded chicken, minced (or sliced) onion, grated queso fresco and cream. Mexicans enjoy them for breakfast and as the main dish at lunch. The more adventurous eat them at dinner.

There are as many variants of chilaquiles as families in Mexico. Each grandmother has her recipe. Some may add rib, egg, chorizo or a portion of beans, while others may bake them or stuff them in the famous tecolota, a chilaquiles sandwich. Chilangos — Mexico City’s residents — worship tecolotas, which causes mockery and controversy in the rest of the country.

The origin of this classic Mexican plate is unknown. Some say that nuns created chilaquiles, others trace its origin back to the Mexican Revolution. Its roots may go as far back as pre-Hispanic times.

There is disagreement on the origin of the word chilaquiles, according to the Larousse de la Cocina Mexicana, a gastronomical dictionary. “Some claim it comes from the Nahuatl word ‘chili,’ meaning pepper, and ‘quetle,’ edible herb. Another possible origin is the Nahuatl ‘chili’, … and ‘aquili,’ which means ‘put into.’ So, chilaquiles would mean ‘put into chili,’” said Alejandro García, a gastronomy graduate specializing in traditional Mexican cuisine and teacher at the Aprende Institute.

“Originally, chilaquiles was a simple dish. One used leftover tortillas from previous days to avoid wasting them, bathed them with salsa and served with beans,” said García.

Chilaquiles became a staple dish during the Revolution due to its practicality. The so-called Adelitas, women soldiers who followed the revolutionary men during the war, prepared the dish.

“The revolutionaries moved by train and could not carry much food. But bringing tortillas was easy. They hardened them in the sun — at that time, people wouldn’t fry their chilaquiles — and made salsa with chili,” said Erika Miranda Melgoza, the owner of the Chilakillers restaurant in Mexico City.

The dish gained popularity throughout the country, but in some areas, chilaquiles became a must.

“In Mexico City, it [the tradition of eating chilaquiles] is solid, but there are many states in which it is not as important a dish,” said Miranda Melgoza.

Diners enjoy chilaquiles in established places. In Mexico City, there are countless street stalls where cooks prepare them to go.

A dish of chilaquiles casts a spell on every Mexican, urging them to wake up. Chilaquiles lovers from La Condesa, one of Mexico City’s trendiest neighborhoods, may satisfy their craving at La Esquina del Chilaquil, while residents of the low-income municipality of Iztapalapa may visit Chilaquiles Yoli and stand in line for an order since 7 a.m.

“Chilaquiles is an addictive dish. Sometimes I ask for salsa verde [green], other times for salsa roja [red] and, when I can’t make up my mind, I opt for the so-called divorced [half bathed in salsa verde and half in salsa roja]. One order is not enough; I always have two for breakfast. You cannot miss the bread roll and a very hot ‘café de olla’ [traditional coffee with cinnamon and other spices],” said Alberto Mendoza, a client of Chilaquiles Yoli.

He says he orders a tecolota when he is in a hurry. “It brings you back to life.”

Each state has its variety

Guanajuato: Salsa on Guanajuato’s chilaquiles is usually deep red, as it is made with guajillo pepper, tomato, onion and garlic. Here, cooks sprinkle the dish with Chihuahua cheese — a mild melting cheese — and chopped onion. They usually serve it with fried or scrambled eggs or even chicken.

Jalisco: Tequila is a village in the central state of Jalisco. Its long-time families bathe their chilaquiles in salsa roja and garnish the dish with sliced onion and aged cheese. They may eat the spicy delicacy by itself or with roasted meat, usually at lunch.

Michoacán: There is a great variety of chilaquiles in the central state of Michoacán, but generally, the state’s salsas include epazote. Cooks sprinkle green chilaquiles with chopped cilantro, cream and cheese crumbs. Usually, this version of the dish does not have any meat. Diners in Michoacán also enjoy their chilaquiles bathed with a roasted tomato salsa, which simmers with fried tortillas.

People from Michoacán cook a unique type of chilaquiles in which tortillas simmer with salsa verde. Beaten eggs are added so they cook along with the dish and thicken the sauce. Chefs often add sour or thickened cream.

Oaxaca: The salsa used in Oaxaca’s red chilaquiles has tomato, garlic, onion and pasilla peppers. Some people like chilaquiles in guajillo salsa or the so-called yellow chilaquiles, with mole amarillo (yellow mole), made with an aromatic herb called yerba santa.

Tabasco and Southeast Mexico: A red tomato salsa seasoned with cilantro and epazote is distinctive of the region’s chilaquiles. Locals garnish the dish with cheese, cream and red onion. Cooks from this area use a type of cheese called “doble crema,” a homemade cream cheese typical in Chiapas and Tabasco. Diners in Southeast Mexico enjoy their chilaquiles with refried or broth black beans.

There is no better plate of chilaquiles than my grandmother’s

“When you ask who makes the best chilaquiles, people will always answer that someone at their household, perhaps their mother or grandmother. Suddenly, our clients began giving us suggestions: ‘in Jalisco, cooks add goat cheese’, ‘my family prepares chilaquiles with such salsa.’ What we did in Chilakillers was listen to those who shared their recipes, not only their state’s recipe but also their families’,” said Miranda Melgoza.

Chilakillers — located at Avenida Revolución 107, in Tacubaya, Mexico City — opened more than 10 years ago. At first, the restaurant sold chilaquiles bathed in the owners’ granny’s salsa. Now the restaurant has six basic salsas and weekend specials with recipes from its guests.

“On the menu, we have six salsas: green, red, bean, mole, avocado and a vegan one. For the weekend specials, we make combinations. Now we have chilaquiles with cochinita pibil [pulled pork marinated in achiote sauce], bathed in habanero-and-pineapple salsa. People also love suadero [shredded and fried beef] with hibiscus-salsa chilaquiles,” said Miranda Melgoza.

“We have always offered these dishes,” she said, explaining they stick to homemade chilaquiles. “We may not be chefs, but we are greedy.”

When it comes to greedy people, Mexicans call themselves experts. They are also creative cooks. The so-called Swiss chilaquiles with a thick layer of melted cheese on top attests to this fact. No one in Switzerland will know what a plate of Swiss chilaquiles or enchiladas is. But in Mexico, any dish becomes Swiss by adding cheese to it!

Those who prefer a saltier version might choose a plate of chilaquiles with cecina [salted beef]. The taste of Mayan chilaquiles, with achiote salsa, is unique. Those who want to keep fit can prepare their chilaquiles with baked tortillas or tortillas made of prickly pear instead of corn.

There are endless possibilities for chilaquiles, perhaps the only limit is the cook’s imagination.

Translated and edited by Gabriela Olmos; edited by Fern Siegel.