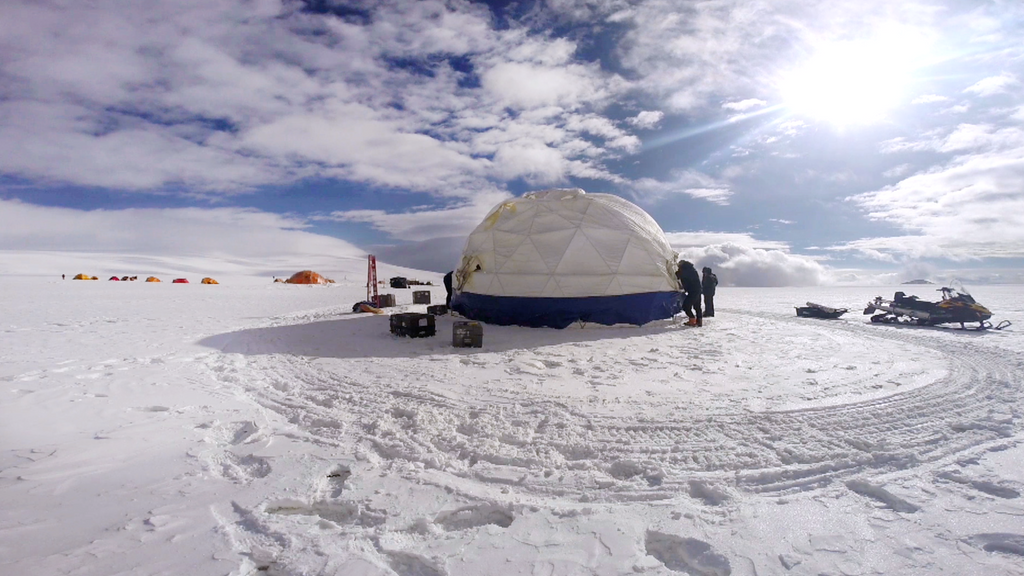 The drilling camp on the Guliya ice cap where the ice cores were taken. (Courtesy of Lonnie Thompson and the Byrd Polar and Climate Research Center/Ohio State University)

Ice cores from a remote glacier in the Tibetan plateau reveal unknown viruses dating to the Pleistocene Epoch nearly 15,000 years ago.

Scientists analyzing ice cores taken from the Guliya ice cap in 2015 have found genetic codes for 33 viruses, all new species. At least 28 are novel viruses, while four were previously identified as viruses that infect bacteria and plants, not animals or humans, microbiologist Zhi-Ping Zhong told Zenger.

A virus is a small parasite that cannot reproduce itself, but once it infects a vulnerable cell, it can produce more viruses.

“There have been only two reports of viruses in ancient glacier ice,” according to the scientists’ study published in the journal Microbiome on July 20.

Zhi-Ping, a postdoctoral scholar at the Byrd Polar and Climate Research Center at Ohio State University and the study’s the lead author, said the study “provides the first window into viral genomes … that have been archived in glacier ice thousands of years. This helps us understand past ecosystems.” It does not focus on viruses infecting people, animals or plants, but “we hope to learn more on that in the future.”

Glaciers offer clues about the distant past and the proximate future, said Lonnie Thompson, distinguished university scholar in Ohio State University’s School of Earth Sciences and a paleo-climatologist. He said the study is important because of climate change.

“We know very little about viruses and microbes in these extreme environments, and what is actually there. “How do bacteria and viruses respond to climate change? What happens when we go from an ice age to a warm period like we’re in now?” Thompson said in a press release. “As far as we could determine, none of these viruses are revivable. They’re frozen in the ice.”

“These results indicate the ice serves as an archive for abundant taxa that are likely equipped with genomic adaptations to cold conditions and might revive and be introduced into ecosystems after the glaciers melt in the future,” the study says.

“Unfortunately, glaciers around the world, including those from Tibetan Plateau and Himalaya, are rapidly shrinking, primarily due to the anthropogenic-enhanced warming of Earth’s ocean-atmosphere system,” the study says. “Such melting will not only lead to the loss of those ancient, archived microbes and viruses, but also release them to the environments in the future.”

Researchers will potentially be able to … begin to incorporate glacier-ice microbes and their viruses relative to past and present climate change in geographically diverse regions globally.”

Uncertainty about viruses after glaciers melt

Whether melting glaciers might revive the viruses is a question that should be answered, Thompson said, “because all the glaciers around the planet are melting in today’s world. Whatever is archived in them is coming out.” He said his team, which has studied the Guliya ice cap since 1990, has had no ill effects from drinking the water there.

University of Michigan microbiologist Philip Hanna said,. “Viruses may or may not survive for extremely long periods in nature, even frozen by nature,” though bacteria such as anthrax may last. “Anthrax spores are hardy and long-lasting; viruses are not nearly so robust as bacterial spores,” he said.

“[Glaciers] were due to overarching forces, such as orbital eccentricity, the obliquity of the planet, ecological succession. These have gone on for thousands of years. Right now, glaciers are retreating,” Thompson said. “What makes our time so different is that we’ve never had 7.8 billion people depending on the planet’s resources.”

Zhi-Ping said his team developed “clean methods” to remove the contaminants on ice core surfaces. He predicts this new protocol for extracting samples of viruses and microbes from ice at high-altitude environments, characterized by cold and aridity, … may one day be applied in the search for life in the Martian polar regions, as well in other icy worlds in our solar system.”

At 22,000 feet above sea level, Guliya is one of the highest glaciers in the world. The study examines ice cores that revealed layers of accumulation where particulate matter and micro-organisms were trapped when each layer was frozen.

He said the date is calculated by counting the annual layers of ice deposited and dating the oxygen they contain. The team also usescarbon-dating of organic material. The date of the samples coincides with a time period within the end of the Pleistocene Epoch, which brought about a major extinction event. Wooly mammoths, giant ground sloths, cave bears and Neanderthals vanished during this period.

“These viruses have signatures of genes that help them infect cells in cold environments — just surreal genetic signatures for how a virus is able to survive in extreme conditions,” said Matthew Sullivan, a professor in the Microbiome Department at Ohio State.

Sullivan said that Zhi-Ping’s decontamination method and the study of ice-bound viruses and microbes may aid researchers in searching for genetic sequences in other extreme icy environments, such as “the moon, or closer to home in Earth’s Atacama Desert.”