Rashanna James-Frison was 4 when her mother was killed. Her father was shot before she was born.
By Renée Onque July 27, 2021
Facebook
Twitter
Linkedin
Email 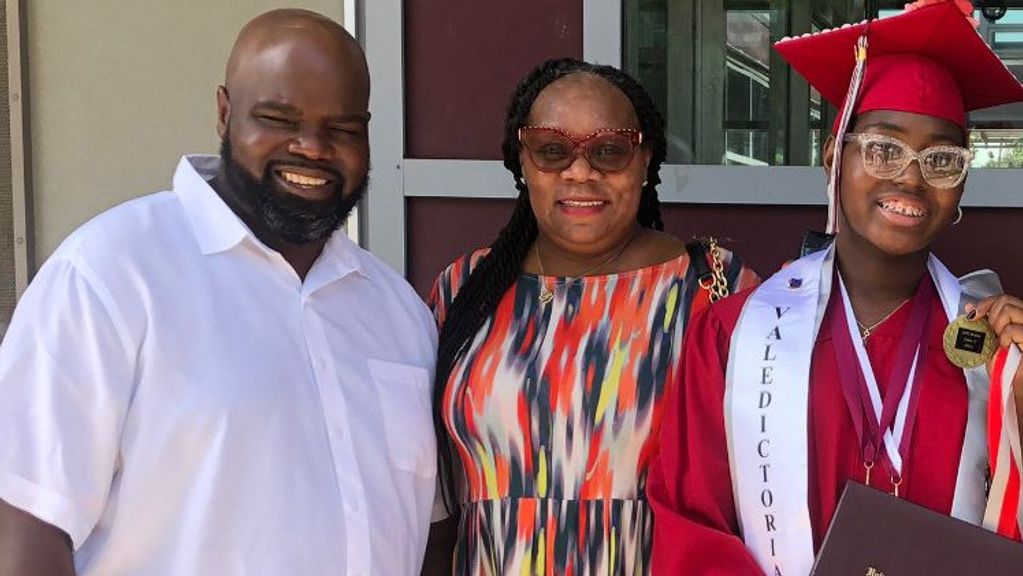 NEWARK, N.J. — Rashanna James-Frison was 4 when her mother was killed; her father was shot and left paralyzed before she was born; and she was shuttled through the foster-care system. Luckily for the young teen, a tribe of loved ones helped lift her up along her painful journey, and this year she rose to be valedictorian of her class.

“So many odds were against her, but she pulled through with the support of family,” said Allison James-Frison, her adoptive mother and biological aunt.

Rashanna’s mother, Nakisha Burks, was found dead 10 years ago in an abandoned apartment in New Jersey. She had been badly beaten, and her death was ruled a homicide.

Rashanna then lived with a family member for a few years but was placed in foster care in 2017 with no warning.

She made the best of her experience in foster care by building relationships with other girls in the system and focusing on school. Six months later, her father’s sister, Allison, and her husband, Andre Frison, stepped in.

Throughout this time, Rashanna still managed to maintain a perfect grade point average. She worked hard in school, thinking about how she could make her parents proud –– the ones she had lost and the ones she had gained.

When Rashanna learned what a valedictorian was, she set her mind on claiming the honor. She submitted extra-credit work, studied every day, and even wrote a valedictory speech before learning she had earned the honor at University High Middle School in Newark, N.J..

Months later, Rashanna’s principal came to her house to formally announce that she was the valedictorian.

“I believe ‘proud’ to [mean] ‘I wasn’t expecting you to do that,’ so I don’t like the word ‘proud’,” said Rashanna’s mentor, Asia Norton, a school board member. “No, she earned that.”

Allison said she and her husband didn’t know Rashanna was placed in foster care until a couple of months after the fact. “Once we found out, we inquired about getting her to come stay with us.”

When they received a call asking if they’d like Rashanna to be placed with them, Allison and Andre immediately said yes. After the family’s first year together, they adopted her.

Her months spent in foster care caused Rashanna to be timid, Allison said, so she enrolled her daughter in extracurricular activities and took her to see her birth father at his care home every Sunday. They played board games and colored pictures, and sometimes she helped feed him.

As Rashanna experienced the world more by traveling with her adoptive parents and immersing herself in activities, she became more focused on excelling.

“It’s her journey. I’m just blessed to be on the ride and to be a part of her life,” her mentor Norton said, “When she needs me, I will be there. When she has a question, I’ll give her my honest opinion.”

Though Rashanna was quite young at the time, she has vivid memories of her mother’s funeral.

“I remember holding her picture all the way up until we were at the grave site when they buried her,” Rashanna said.

During her seventh-grade year, she had to attend classes virtually during the pandemic lockdown in 2020. That year, in her final year of middle school, her birth father’s facility was affected by COVID.

“The only phone call we received was that he had contracted COVID-19 and was being transported to the hospital,” Allison said. “From my experience, there was no communication with the loved ones of people in nursing homes during the pandemic.”

Allison and her oldest brother weren’t able to see James in the hospital. A few days later, they were told he had died.

“It touched me because that was my brother, so not only did Rashanna lose her father, but I lost my brother at the same time,” Allison said.

Rashanna’s adoptive parents struggled to find the best way to tell her she had lost her last living birth parent. But before they were able to break the news, Rashanna received a message from one of her cousins saying, “I’m sorry for your loss.”

“That was before I found out, so I was like, what is she talking about?” Rashanna said.

“His funeral actually took place outside in the parking lot, and they only allowed three people to go to the burial grounds,” said Allison, “We couldn’t even get out of the car, so it was just my husband, Rashanna and myself. And before we even turned off the ignition, it was over.”

Despite all that she has been through, Rashanna told Allison she plans to be at the top of her class in high school. After graduation, she wants to attend Rutgers University and then pursue a graduate degree in social work at Howard University.

“I want to help children, so they do not have to be separated from their family like I was,” said Rashanna.

“Success is not what society tells you,” said Norton, “and Rashanna is not letting society define what success is for her.”