“Awesome Dawesome” opens up about Biles pulling out of the Olympics and her own efforts to change the culture of gymnastics. 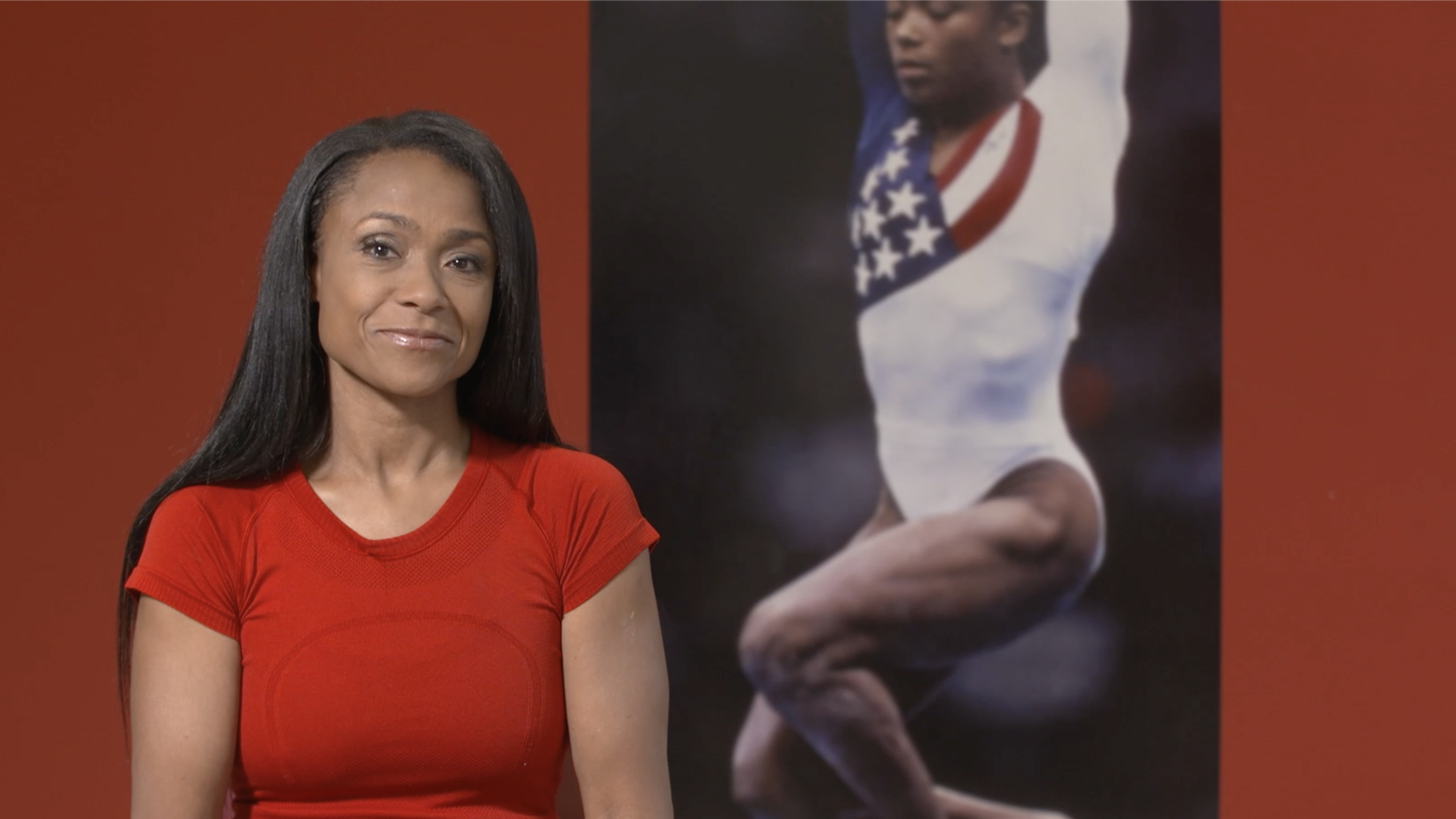 Olympic gold medal gymnast Dominique Dawes, part of the “Magnificent Seven” team during the 1996 summer games in Atlanta, spoke about the mental challenges of competition in the wake of Simone Biles’s withdrawal from team competition in the 2021 Tokyo games, in Clarksburg, Md., on July 27, 2021. (Claire Swift/Zenger)

Clarksburg, Md. — Three-time Olympian Dominique Dawes is among a handful of Americans who might know what it’s like to be Simone Biles, bowing out of the games in Japan when the world expected her to keep winning gold medals. Dawes, now the mother of four young children and owner of a gymnastics academy, says every young woman in the spotlight has the right to do what Biles did.

“She needs to do what is best for Simone,” Dawes told Zenger in an interview. Biles, considered the “Greatest of All Time” in her sport, pulled out of the team event final, citing mental exhaustion. Her decision signaled a shift in the cutthroat culture of American gymnastics.

“At the end of the day she is the one who has to live her life. Just like [Japanese world tennis No. 1] Naomi Osaka, who made the decision to not partake in a press conference because she was concerned about her mental health, athletes need to be able to say no,” said Dawes. “If they feel that it’s unhealthy for them, they need to be able to step away.”

Dawes was a member of the “Magnificent Seven” team that won gold at the 1996 Summer Olympics in Atlanta. She was also the first black athlete of any nationality — male or female — to win an Olympic gold medal in gymnastics, and the first African-American to win an individual Olympic medal in the floor exercise.

A lot has changed in 25 years, she said. Her successors like Biles are more empowered than she was to stand up for their own interests.

“When I think about the Olympic Games, it brings me back to the level of sacrifice and commitment and what it took to earn a spot on that Olympic stage,” Dawes said. “We did what was told of us. Back in the ’90s, gymnasts were literally trained to be robots. It is very much a breath of fresh air to be a 44-year-old mom and to listen to my inner voice now.”

Dawes says she rarely smiled in competition. But today she encourages the girls she trains to express emotions that were less acceptable then. And she laughs a lot.

Dawes said she looked at gymnastics in a different way when she became a mother.

“I think it is important for our kids to enjoy their childhood,” said Dawes, who started in gymnastics when she was 6 years old.

In the 2020 documentary “Art of the Athlete,” Dawes talks about moving away from her parents and siblings to train when she was 10. The win-at-all-costs culture drove some girls to succeed, others to wilt under pressure, and nearly everyone to keep quiet about sexual abuse many of them suffered at the hands of former USA Gymnastics national team doctor Larry Nassar.

“Everything that came out in 2016 regarding Larry Nassar … it was the culture that allowed that to go on,” Dawes said. “He abused so many young girls, and now we are shining a light on a culture that has some horrible, physical and psychological abuse. I want to make sure that we are focusing on building and not tearing kids down, building them up to be champions in life.”

“We are really striving to change the spirit of gymnastics. It was the culture that allowed the abuse of so many young girls,” she said of her own training facility.

Dawes said she doesn’t have a competitive team at the Dominique Dawes Gymnastics and Ninja Academy in Clarksburg, Maryland, and it was her choice to foster “a healthy environment” instead.

“While I love sports, it can be a very grueling environment,” she said. “What I am offering is quite different. I want people to have a healthy introduction to the sport of gymnastics. It is not about building champions. It is more about happy and healthy kids growing up to be healthy adults.”

“As a mom of four, I see life differently,” she said. “Everyone has different strengths and abilities. I see every kid there as gifted and talented. That’s how my facilities run.”

Dawes said she and her family were watching Team USA’s performances in Tokyo.

“I feel like everyone in the globe is going to be watching, being what we have been through over the last year and a half,” she said. “We are cheering for them.”

Thompson, a former professional basketball player, said of Dawes: “She is amazing. I want to elevate her as a mother, wife and businesswoman. I see the business as a calling. I look at her all the time, and as a man I have to put the ego aside because she is so well-loved, and let her be the mother and the wife. It is often a complicated road to navigate.”

Former Olympic standout Dominique Dawes, now a mother of four, is focused on creating a healthy environment for children at her Maryland gymnastics facility. (Courtesy of Dominique Dawes)

Morgan State University professor Milton Kent, who teaches sportswriting and reporting, said Simone Biles and her generation of gymnasts owe much to Dawes and her teammates. Eastern European countries set the standards in gymnastics during the 1990s, and Americans were seldom serious contenders.

“They were controlled by Béla Károlyi, the Hungarian [coach] who had a big influence in the U.S.,” Kent said. “Dominique had her own private coach, Kelli Hill.”

Dawes is not continuing their hard-nosed tradition. most parents, she said, do not understand “the journey and the level of sacrifice it takes for a young child.”

“I now see things in terms of my children and as a protective parent,” Dawes told Zenger.

“I am going to be part of the parents who really care.”