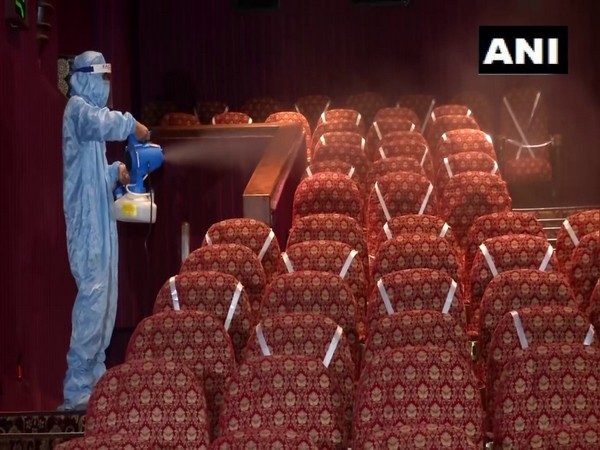 Seats at a movie theatre being sanitized. (Photo/ANI)

NEW DELHI — With Covid-19 cases in the Indian capital Delhi now under control, movie theaters and cinemas are all set to cautiously reopen and welcome customers back after months of closure due to a spike in Covid-19 cases.

Halls are being carefully sanitized, and Ultra Violet lights are being installed in several theaters.

“Snacks will not be allowed in the halls, and only seal-packed eatables will be available for sale,” said J.J. Verma, manager at the Delite Cinema Hall.

Amid declining Covid-19 cases in the national capital, the Delhi government, on July 24, 2021, issued orders allowing cinemas/theatres/multiplexes to reopen with 50 percent capacity from 5 a.m. on July 26, 2021.

When asked if he thinks customers will come back to watching movies in movie theaters after the increased popularity of streaming platforms, Verma said that many films released online would have done much better had they been released in a theater.

“Streaming platforms are not a challenge for us,” he said.

“Many movies were released on platforms during the lockdown, but they did not get a huge response from the audience. Films would have done better had they been released in cinemas halls.”

However, at the Liberty Cinema in Karol Bagh in Delhi, they are unsure how many people will watch movies.

Y.N. Singh, who handles the accounts department at Liberty Cinema, said that a movie would not be played at the theater unless it is a big one, as the cinema neither has a film nor an agreement, and it is unlikely that people will come to watch.

“The Delhi government announced this recently,” he said.

“It will take time for us to open the cinemas as we neither have any film nor agreement. We also have to arrange staff.”

“We cannot open it till all the arrangements are done. How will it benefit us? Families are not coming to watch movies. Even if the cinemas will get open, no one will come to watch the film (sic).”

Singh said that would open theaters only for “good movies.”

He also emphasized that all the government’s Covid-19 guidelines will be followed when they open theaters.

“We will follow the guidelines given by the government,” he said.

“We are not sure how many people are going to come to watch movies. It completely depends on the movie. Else the probability of people coming to watch movies is less.”

While talking to people on the streets and asking their opinion on how they look at cinemas opening with 50 percent occupancy, one of the passersby named Jalaj said it was an excellent opportunity as people get to change from their work-from-home lifestyle.

“It’s been more than a year since the lockdown has been imposed, and people are stuck indoors,” he said.

“Now, whenever people are getting an opportunity, they want to get fresh air from all the mental pressure they are getting by working from home. It looks like a good opportunity to get out of the house and meet friends and family. I see this as a nice subtle way to get back to normal life (sic).”

He said that he wasn’t sure if he would visit theaters or not as Covid cases in other states are going up and down.

“It is better to take precautions. If the cases reduce, I might catch up with my friends and watch movies,” he said.

Another passerby in Connaught Place, in the heart of Delhi, named Abhijeet, said that this was probably not a good idea as people now have a habit of using streaming platforms like Netflix and Amazon Prime.

“I don’t think it is a good idea because nowadays, people have become habitual in using Netflix and Prime,” he said.

“People are comfortable in their houses. Now, as they have become habitual, it will be a new experience if they again start going, and it’s also hectic.”