A French-Brazilian group has other ideas. It wants the carrier preserved as a museum.
By Georgina Jadikovskaall July 23, 2021
Facebook
Twitter
Linkedin
Email 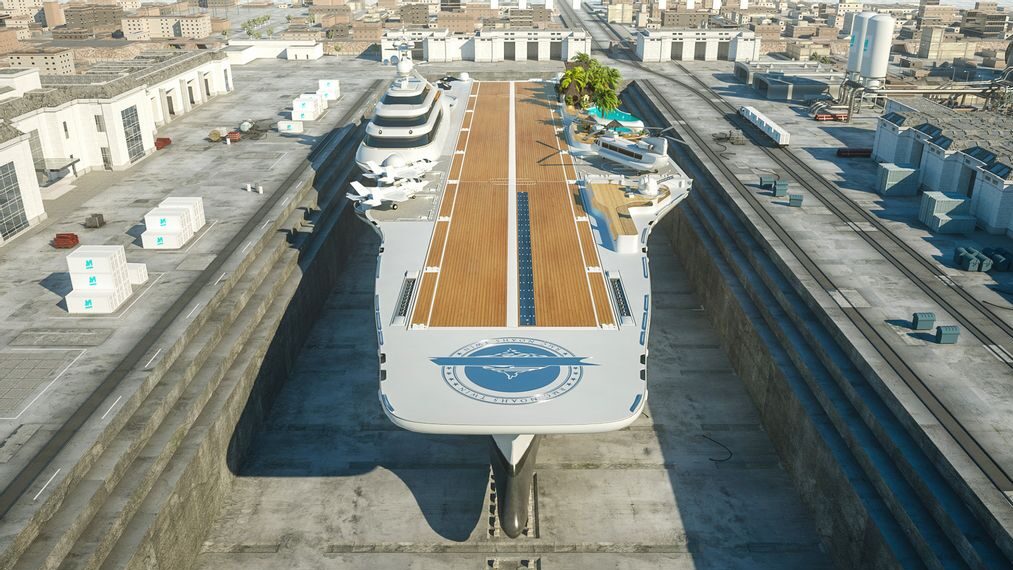 An artistic rendering shows how the FS Foch, a decommissioned aircraft carrier used by France and Brazil, will look after its conversion into a luxury yacht. (Mitsi Studio/Zenger)

A German team has gone public with an effort to convert a 58-year-old French aircraft carrier into a luxury yacht, complete with a golf course.

The FS Foch was the second Clemenceau-class aircraft carrier to serve with the French Navy, first operating in 1963. Brazil renamed it the NAe São Paulo when it purchased the carrier in 2000.

The historically important vessel, which carried 40 modern aircraft, was decommissioned in 2018. A Turkish company bought it in March 2021 for $1.86 million in order to dismantle the ship, since much of consists of recyclable metals.

But now a group of German companies have joined forces for a project called the Düsseldorf Initiative, aiming buy out and convert the 869-foot ship and its flight deck into a luxurious leisure space.

The concept is based on the Dutch Studio Mitsi’s “Super Yacht” model, called the Noah Twins Carrier, which is a design for the first aircraft yacht in the world.

Udo Stern, the initiative’s spokesperson, said he was looking for an international investor to buy the ship, pay the transfer costs and finance its renovation. The group of companies would then be involved in the yacht phase of the process.

“It’s not about the money for us. I’m thinking of a European ship of cultures, a globally unique project to transform a military into a civilian object,” Stern said.

He said the 148,000-square-foot hangar under the flight deck holds a sufficient amount of space for exhibitions, sporting events, cinemas and concerts.

The team is waiting for France’s resale approval.

Stern said a visionary from the tourism industry could easily — and profitably — convert the ship’s 55 military rooms into hotel rooms, casinos and restaurants.

The Foch and the FS Clemenceau formed the backbone of the world’s second-largest carrier force for the latter half of the Cold War. Both vessels were catapult-assisted carriers, using an on-deck mechanism to launch and recover aircraft from the deck.

The Foch sails at a maximum speed of 30 knots, about 34 mph, and it can accommodate 1,920 personnel including crew, air group and troops.

Dismantling the ship has sparked discussion over the pollution risk associated with the scrap-cutting process.

“The French Courts stopped the scrapping of the asbestos-laden aircraft carrier Clemenceau on the beach of Alang, India, in 2006. Fifteen years later, France is faced with a second toxic headache,” the NGO Shipbreaking Platform said in a statement.

PCBs are chlorine compounds that cause cancer and other disease, according to the International Agency for Research on Cancer. Industrialized nations have  banned their production and labeled them “persistent organic pollutants.”

And PCBs aren’t the only environmental hazard on board.

Annie Thebaud-Mony, director of research at the National Institute of Health and Medical Research in Paris, said that “the large amounts of asbestos still onboard the São Paulo need to be handled and disposed of without exposing workers and surrounding communities to the risk of cancer.”

“The contractual clause in the sale of the Foch to Brazil gives France the last say in where the aircraft carrier can be dismantled. French authorities must direct the Clemeceau’s sister ship to an EU-approved facility — anything else would be a scandal,” she said.

Shipbreaking Platform sent a letter to the Turkish Ministry of Environment and Urbanization in June 2021.

“The aircraft carrier should not be allowed to leave Brazil until and unless the IHM [an Inventory Hazardous Materials certificate] is completed.  [The sale] must therefore be annulled and subject to rebidding, based on legal constraints and a proper and accurate IHM,“ said the NGO.

The São Paulo-Foch Institute in Brazil, a group of former Brazilian and French military personnel, hopes to prevent the aircraft carrier from being dismantled. They want to turn it into a museum.

“It would be much more profitable and beneficial than dismantling the ship. Approximately 600 tons of asbestos — hazardous for human health and nature — are encapsulated in the ship. Such an agreement would decrease the ship’s dismantling expenses, and transporting the ship to the Mediterranean will be very expensive,” the group said.