Rare bottles of Château Margaux and Rothschild and a Scotch blended for Queen Elizabeth’s coronation were found in a Greek palace. 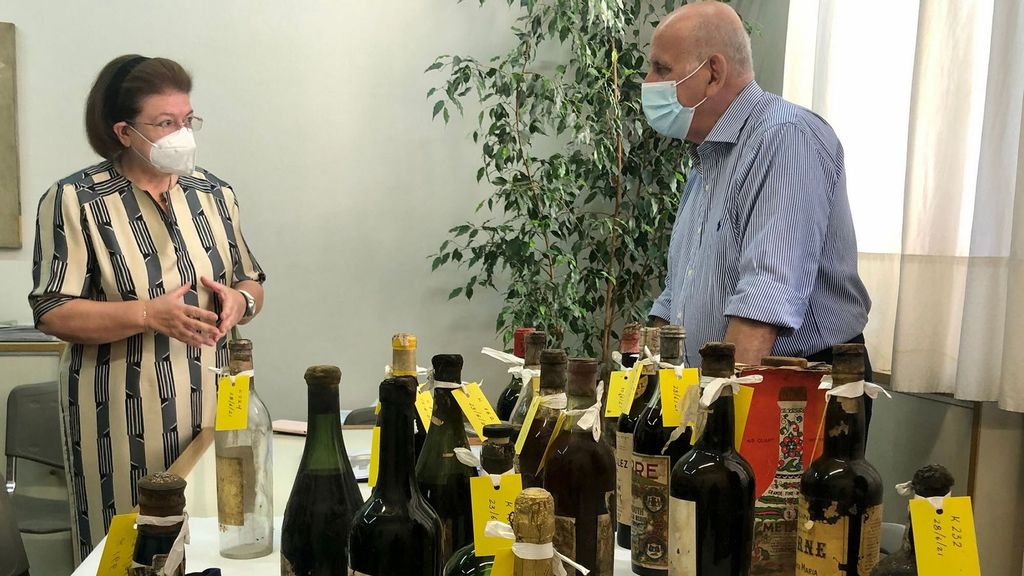 Greek Minister of Culture Lina Mendoni and Periklis Baltas, the head of the historical archive at the Achaia Clauss winery, with some of bottles found in the Tatoi Royal Palace. (Greek Ministry of Culture/Zenger)

Archeologists at the former Greek royal family’s summer palace have unearthed several thousand bottles of rare alcoholic beverages, including a bottle of Scotch whiskey dedicated to Queen Elizabeth II, in a hidden cellar.

Restorations by the Ministry of Culture at Tatoi Royal Palace, about 17 miles from the center of Athens, uncovered more than 4,000 rare bottles of wine and 235 other alcohol beverages on July 18.

The bottles were discovered in a previously unknown wine cellar in the palace. They are considered of great historical importance as many bear original labels.

Among the finds were bottles of Château Margaux, Château de Vincennes and Château Rothschild’s finest wines.

There is also a special edition of Chivas that researchers found was produced to mark the coronation of Queen Elizabeth II. The 1952 blended Scotch whiskey is in a ceramic bottle that was next to a collection of bottles bearing the estate’s label, officials said.

Researchers also discovered cans of soft drinks that date back to a time before such products were imported into the country. There are about 300 unopened bottle cases.

Ministry officials believe that even more hidden treasures from the Tatoi Palace wine cellar will be found as work continues.

Some of the beverages are considered fit for consumption, according to the Ministry of Culture, despite having been kept in rather poor conditions. They will be cataloged after the restoration ends.

Since expert knowledge is required to assess rare bottles, the ministry has signed a deal with the Achaia Claus winery for pro bono consultancy services during the restorations.

Achaia Claus, dating to 1861, was the first winery to be established in Greece and is still operating as a winery and wine-making museum.

“The Tatoi wine and spirits collection, in addition to its significant collector value, is also of great scientific and research interest,” said Greek Minister of Culture Lina Mendoni. “The restoration work to showcase the former royal estate is complex and requires specialist knowledge of many and varied areas.

“For the evaluation of the wine collection, we are working with specialist scientists who have know-how, both on an oenological level and for its historic validation. Our goal is that, upon completion of the restoration work and the transition of the palace building into a museum, the part of the collection that has been evaluated as fit for display should find its place in the existing space of the palace cellars.

“The Tatoi wine cellar’s over 50-year-old collection, which is of exceptional cultural and oenological value, will be open to the public,” Mendoni said.