Oscillations are resonant modes that make the sun “ring like a bell,” scientists say. 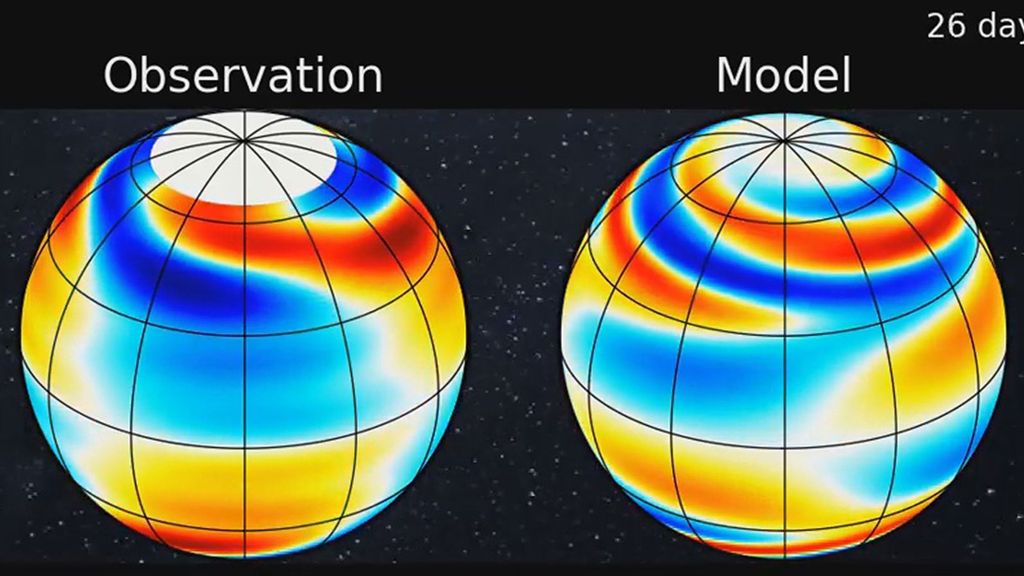 Astronomers say the sun does more than just shine. It sings as it spins, emitting low frequencies that would make musical sounds if they didn’t occur in the vacuum of space.

Researchers at the Max Planck Institute for Solar System Research and the University of Göttingen in Germany discovered “deep low musical notes” using data from NASA.

Scientists discovered higher musical notes coming from the sun in the 1960s. “The sun rings like a bell,” the Planck Institute researchers said.

The Planck team said they spotted “very slow swirling motions” on the sun’s surface — a 3 mph churn that seem linked to the 27 days it takes to rotate around once. The speed is “about how fast a person walks”, said scientist Zhi-Chao Liang.

But computer models established that since the sun is made of gas, not solids, different parts rotate at different speeds. This phenomenon, called “differential rotation,” leads to the different regions resonating with each other, emitting vibrations at regular, predictable speeds.

The faster vibrations measured more than a half-century ago — the “high” notes — came from cycles that lasted about five minutes, not 27 days.

Gaseous turbulence near the surface of the sun causes these shorter acoustic “oscillations.” Millions of them are trapped in the sun’s interior, tracked by scientists called helioseismologists.

“These 5-minute oscillations have been observed continuously by ground-based telescopes and space observatories since the mid 1990s,” the Planck researchers said in a statement, “and have been used very successfully by helioseismologists to learn about the internal structure and dynamics of our star — just like seismologists learn about the interior of the Earth by studying earthquakes.”

Helioseismologists have managed over the years to map how the sun’s gases rotate, both on the surface and deep beneath it.

In order to work out why the “musical” vibrations occur, the team compared NASA’s observational data to computer models.

“The models allow us to look inside the sun’s interior and determine the full three-dimensional structure of the oscillations,” graduate student Yuto Bekki said.

“All of these new oscillations we observe on the sun are strongly affected by the sun’s differential rotation,” said scientist Damien Fournier.

Laurent Gizon, lead author of the new study, said her team’s discovery of a “is very exciting” because it allows them to calculate the strength of the convection currents that “control the solar dynamo.”

Researchers said they made the discovery using 10 years’ worth of observations from NASA’s Solar Dynamics Observatory. The study was published in the journal “Astronomy and Astrophysics.”