‘We Can’t Wait For Elections’: Lebanese Protesters Storm The Streets In Beirut

A year on, survivors and family members of victims of the Beirut port blast seek justice amid economic collapse of the country.
By Dario Sabaghi July 22, 2021
Facebook
Twitter
Linkedin
Email 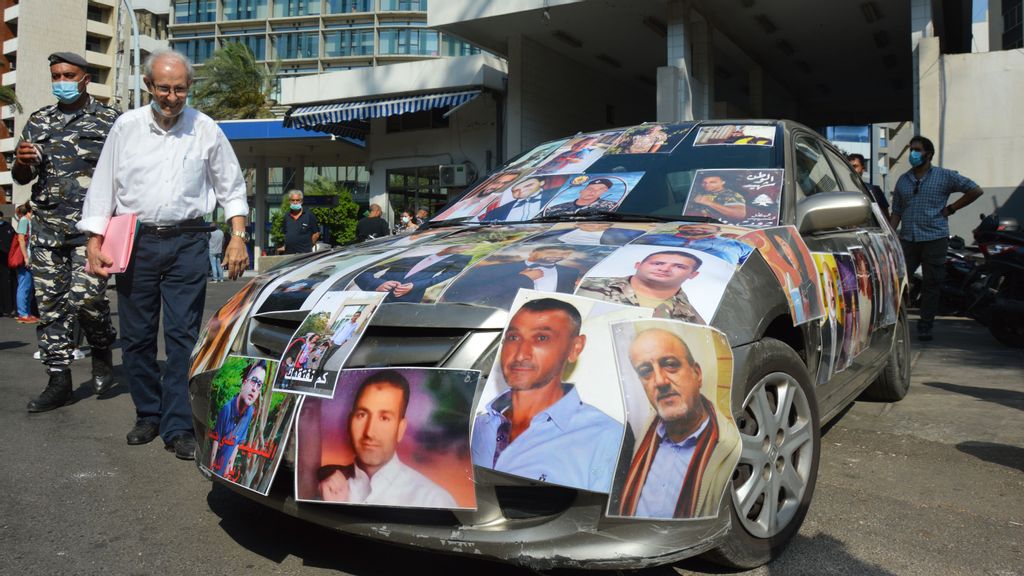 A car parked in front of the Ministry of Justice is covered by the pictures of some victims of the Beirut blast. (Dario Sabaghi)

BEIRUT — Nearly a year after an explosion at a Beirut port killed 210 people and injured more than 6,000 others, victims’ families are losing patience with the government of Lebanon. Ministers have been unwilling to strip away immunity from current and former officials who caused the blast, and street protesters are getting loud.

Demonstrations several days each week in Beirut target the Lebanese Parliament, which families say should allow the prosecution of government ministers who mismanaged the ammonium nitrate stockpiles that exploded in August 2020. In addition to the dead and wounded, the explosions and fires forced displaced 300,000 people.

Some organizers started their own fires on July 14, torching car tires in the center of a major roadway near the Ministry of Justice and snarling midday traffic. A few protesters stood in the path of oncoming cars and forced them to back away.

Unlike on previous days, when Lebanese riot police clashed with families and other demonstrators, police officers allowed them to protest in the middle of the street.

Protesters say elected politicians are trying to avoid accountability for the blast, and covering for each other.

Roustum, 40, led some of the shouting, prodding demonstrators who held large framed photos of their lost loved ones. Some addressed the crowd, blaming political corruption for their deaths.

Lebanon’s government ministers have more than just an explosion to answer for. Protesters blame them, too, for mishandling an economic crisis beginning in 2019. The Lebanese currency has lost about 90 percent of its value since then, trapping more than half of Lebanon’s population in poverty.

“Everything changed after the economic crisis,” Roustum said. “We have no fuel, no medicine, no milk for kids.”

“Politicians don’t know what politics is. They know politics only for robbing people,” he said. “We came here to demand a fair life. We don’t want a situation like a war. Our government doesn’t care about [any] humans but themselves.”

“We cannot wait for elections. How can we live for one year in this situation? Kids are dying,” he said. “Some days ago, a kid on oxygen support died in Tripoli after his machine stopped working and generators were turned off due to the shortage of diesel. We need to wake up together.”