VIDEO: So Sweet They Could Be Sugar Coati-d: Cute Coatimundi Kittens Go On Show 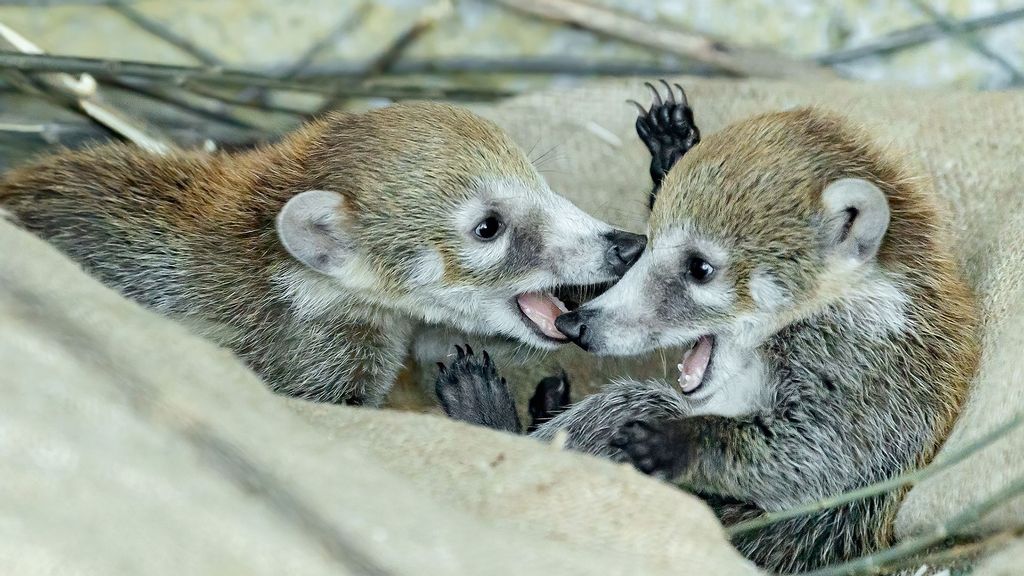 The coati twins that were born in the Vienna Zoo in Austria on May 22, 2021. (Daniel Zupanc/Zenger)

A pair of white-nosed coati twins finally saw the light of day when they ran through their enclosure at a zoo in Austria’s capital Vienna for the first time ever.

The two female coatis, named Bonita and Belize, were filmed frolicking at Tiergarten Schonbrunn Zoo for the first time after their birth on May 22.

Like all coatis, these kittens were born blind but slowly gained their sight, said Hering-Hagenbeck.

At birth, the young ones were tailless and measured only 3.9 inches (10 cm) in length. They were looked after by their mother Doll and father Fernando in a specially-made nest.

“Above all, their father Fernando is a patient playmate of theirs. He has a lot of fun jumping around with them as well,” Hering-Hagenbeck said.

When the little ones’ playtime is over, the whole family snuggles up together to rest.

While Bonita and Belize feed from their mother, zookeepers provide fresh fruit, boiled eggs and meat for their omnivorous parents.

This is the second time Doll and Fernando have become parents. They raised two other youngsters in 2020 that were given to Bellewaerde Zoo near the city of Ypres in Belgium.

Coati litters typically consist of two to seven young. They can live up to seven years in the wild and up to 14 years in human care, according to the Smithsonian’s National Zoo and Conservation Biology Institute.

“Our zookeepers followed the same idea when they named the coatis as they did with dog breeding,” said Hering-Hagenbeck.

“The first offspring last year were the ‘A’ offspring, hence Alonso and Alessandro. The females are called Bonita and Belize, two South American names fitting the coati distribution area,” he said.

Like raccoons, the white-nosed coati (Nasua narica), also known as the coatimundi, is a member of the family Procyonidae. They mainly inhabit wooded areas at altitudes between 6,500 and 9,800 feet, according to the San Diego Zoo Wildlife Alliance.

The white-nosed coati and the South American coati are labeled “least critical” by the Red List of Threatened Species from the International Union for Conservation of Nature.

Still, the population for the two species is decreasing, according to the list. Both species became ‘near threatened’ and ‘endangered’ when they were officially separated into western and eastern species in 2009.

Main causes of the population decline include deforestation, expansion of agriculture, vehicle accidents and hunting, according to the San Diego Zoo Wildlife Alliance.

«Previous Post
Chinese Ambassador Summoned By Norway Over IT Attack Against Parliament»Next Post
Frog In Your Throat? New Species’ Tadpoles Live Inside A Meat-Eating Plant