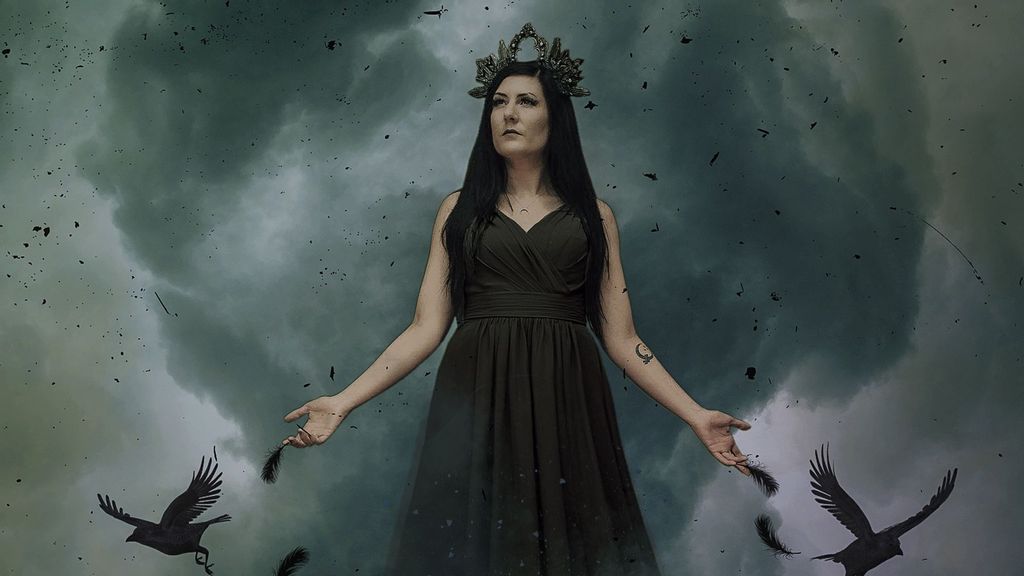 A piece of artwork with Lindsay Schoolcraft from the band Antiqva and former member of the English extreme metal band Cradle of Filth, done by Zorica Stojkovik. (Design Z/Zenger)

A young Macedonian woman who combined her passion for heavy metal music with dark fantasy has created ‘Design Z’ that has amazed some of the famous names that she included in her work.

‘Design Z’ is actually the personal signature for Zorica Stojkovik, a graphic designer who has explored her two childhood passions and turned her dreams into daring projects.

Her creations include Italian opera singer and fantasy devotee Chiara Malvestiti who was thrilled by the transforming images.

And a gothic metal solo artist and harpist Lindsay Matheson, who goes by the name Lindsay Schoolcraft, was delighted to be turned into the Queen of Crows, sharing it with her fans who were equally amazed.

Zorica shares her skills online showing how the individual elements of her artworks are put together to create the final version.

“I first started using Corel and I thought that I could never learn the intricacies of Photoshop, but with a lot of time spent on online classes and tutorials, I learned a lot. I think you can never learn enough and there is always more to discover, she said.

“My art is mostly dark and gothic in style, in most of my pictures, there are crows. I also enjoy doing portrait photo-manipulations, mostly of my favorite bands such as Cradle of Filth, Therion, and Nightwish.

“I love photo manipulation. When I create an image, it is like recharging my batteries. My inspiration comes mostly from movies and music, especially lyrics. I love dark gothic art.”

Photo manipulation is sometimes laborious work — it can take weeks to finalize an art image — and it is used for artistic and aesthetic expression; bringing changes to someone else’s content without permission is illegal copyright infringement.

Stojkovik likes to blend real photos with synthetic elements for a surreal result.

She said that the inspiration that she gets from using crows was also energizing. The crow is associated with life mysteries and magic and symbolizes transformation and change.

“However, I see inspiration in many things and I have almost 200 pictures in my portfolio.

“I also like creating my fantasy images with elements of realism,” said Stojkovik.

Her ambitious projects started as a joke some years ago.

“At the start, I asked my brother Saso if I could do a design of him. When I finished I sent it to him and he was stunned. He asked me to do another one and gave suggestions, such as a dragon and a dark sky. It helped ignite my passion and was a moment of great satisfaction for me.

“In fact, my family and friends are a big support. I also use models for some images and seeing their faces after I’ve finished is always very rewarding.“

“I also worked on an album cover for Terry Battle and Violet Gin, and I often collaborate with a model from Serbia, Eleanore Dystopia.

“My art is however strongly connected to heavy metal music and as the former owner of the ‘I love Heavy Metal’ online radio station, I often worked with bands and helped with cover art. I also did a lot of video projects for the station that were shared on the station’s YouTube channel,” the Macedonian graphic designer said.

Photo manipulation became one of the most creative art forms to come out of the digital age and it is often used in advertising.