The 82-foot-long craft had been buried under tons of rubble and clay. 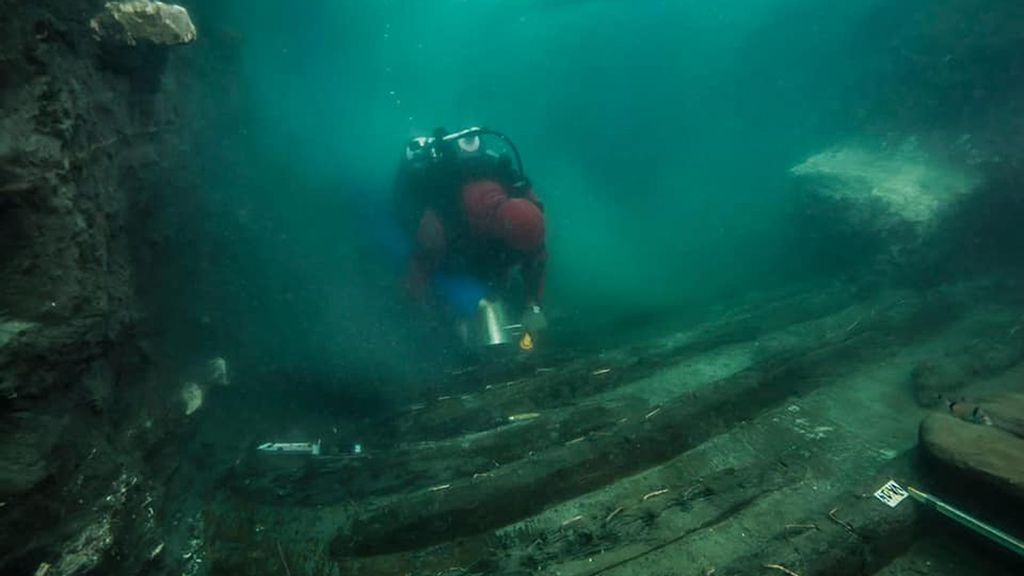 A warship wreck from the era when Cleopatra ruled Egypt was uncovered at the sunken city of Heracleion in Abu Qir Bay in Alexandria during an underwater excavation led by the European Institute for Underwater Archeology. (Egyptian Ministry of Tourism and Antiquities/ Zenger)

Archeologists have discovered Greek treasures including a burial site while searching for new parts of a submerged Egyptian city that was once the largest port in Egypt.

Divers first discovered Heracleion, better known by its Egyptian name Thonis, in 2000, after it spent more than 2,000 years underwater. The old city was sunk; all that is left is under just 30 feet of water in Abi Qir Bay.

The newly discovered sunken vessel rests in the Abu Qir Bay region in Alexandria, on the Mediterranean coast in northern Egypt. It measured more than 82 feet long and had a flat bottom and a large sail, useful for navigating the Nile River and its delta.

The underwater excavation was a French and Egyptian mission led by the European Institute for Underwater Archaeology.

“Our preliminary study shows the hull of this galley was built in the Classical tradition and relied on long mortise-and-tenon joints and well-developed internal structure, said Franck Goddio, the agency’s leader, in a press release.

“However, it also contains features of ancient Egyptian construction and allows us to speak of a mixed type of construction. It was a rowing ship that was also furnished with a large sail, as shown by a mast step of considerable dimensions. This longboat was flat-bottomed and had a flat keel, which was quite advantageous for navigation on the Nile and in the Delta.

“Some typical ancient Egyptian shipbuilding features, together with the evidence for reuse of wood in the ship, indicat[es] it was built in Egypt,“ Goddio said.

The ancient military vessel had been pinned to the bottom of a deep canal after huge blocks from a temple to Amun, the ancient Egyptian god of the sun and air, fell on it during the second century B.C., according to a statement released by the Egyptian Ministry of Tourism and Antiquities.

Ayman Ashmawi, director general of excavation at Egypt’s Supreme Council of Antiquities, said the remains of the vessel were found under about 16 feet of solid clay mixed in with debris from the temple. The excavators used cutting-edge technology, including sonar equipment that helps detect shipwrecks, to scan sediment and rock beneath the seafloor.

Goddio said the discovery was a rare find. It is unusual to find vessels dating back to that era. He said Greek vessels of this type were unheard of until scientists discovered a vessel called the Bouniqia Marsala, which dates back to about 235 B.C.

The burial area dates to the fourth century B.C., and is located near the entrance to what was a northeastern channel into the ancient city, according to Professor Ehab Fahmy, who leads Egypt’s Central Department of Sunken Antiquities.

The new findings show the presence of Greek merchants who lived in the city at the time, permitted by the pharaohs of the era to settle there.

It also confirms Heracleion was at one time Egypt’s largest Mediterranean port — predating Alexandria, which Alexander the Great founded in 331 B.C.

Heracleion was surpassed by Alexandria, which became Egypt’s main port during the second century B.C. A combination of rising sea levels, tsunamis and earthquakes spelled the demise of the city around this time. The entire city sunk centuries later.