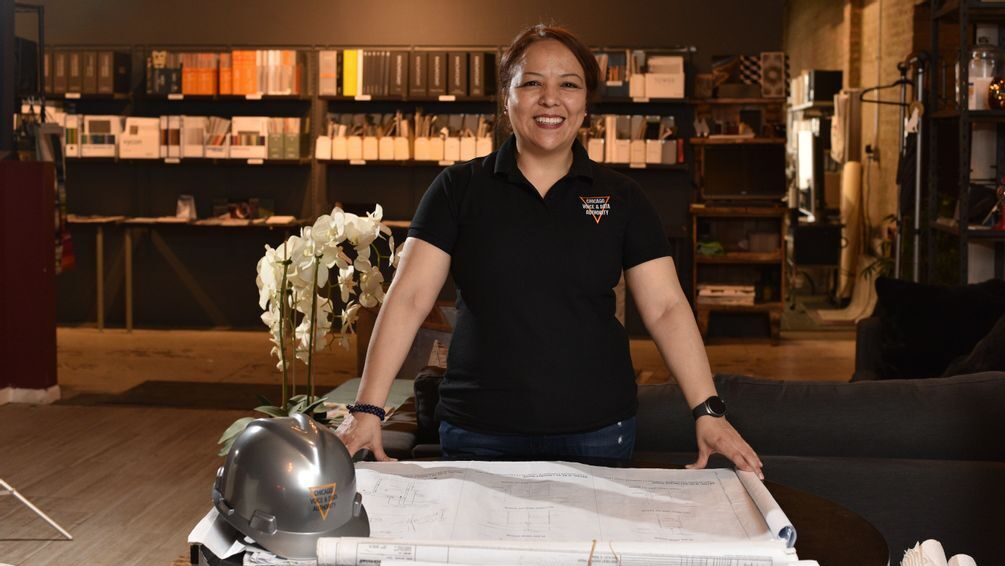 Cristina Villafuerte Berán would love to see more women working in the telecommunications sector and encourages them to start their companies. (Negocios Now)

Cristina Villafuerte Berán’s career path could not be more electrifying.

Villafuerte Berán is the owner of a telecommunications company with annual sales of more than $10 million.

After finishing high school, she learned electricity while helping her brothers and cousins, who worked in construction. As a teenager, she used to climb stairs, remove branches, jump on ceilings and pierce walls. She learned to place cables, switches and lighting fixtures, calculate amperage and install power or heating in houses, buildings and hospitals.

Working hard, she became an electrician, a job that “fed her” and taught her what she needed to create her own telecommunications company. At first, she named her company Cris. B Consulting, changing it later to Chicago Voice & Data Authority.

Villafuerte Berán was born and raised in Mexico City in a family of 11 siblings. She emigrated with her parents to Chicago at the age of 10.

“I come from a large family. We were eight women and three men. Our parents used to tell us since we were little, ‘those who do not work, do not eat,’” she said.

Villafuerte Berán didn’t mind working among men “or working as a maid because what I wanted was to learn,” she said.

The electrician got a job and began making her way in an industry often unfriendly to women. At one point in her life, she realized there was a similarity between her trade and the installation of cables for Internet services, telephone and security systems. So, she decided to explore those fields, too.

“They were small jobs, but I liked them and didn’t find them difficult,” she said.

Already in the telecommunications sector, she made good friends and clients. At this point, she had the idea of launching her own company. “I had already mastered the job and had seen that it was a good business,” she said.

Villafuerte Berán founded Cris. B Consulting in 2015, later rebranded as Chicago Voice & Data Authority, to better represent the services it offers. In less than five years, it had 50 employees, with 40 technicians in the field and seven in the office.

The growth has been rapid, and Villafuerte Berán is also managing personnel and finances.

“I know how to do the work in the field. Now, I am focused on learning more about running the office, including delegating projects, keeping up with employees’ needs, organizing finances and marketing and hiring key people to meet our expansion objective,” she said.

The goal is 15 million

The company is currently working on a $2.5 million contract for a construction project. It involves the installation of a telecommunication and security network for 18 buildings in four blocks of Chicago. The project will connect all the buildings in the area, a total of 450 apartments.

“We are growing little by little, and we hope to make $15 million dollars in sales this year, increasing by 50 percent last year’s figures,” she said.

Women should not be scared

The young company already employs 10 women. But Villafuerte Berán would love to see more women in the industry and encourages them to build their own companies without letting prejudice defeat them.

“I was not afraid to start. I met a lot of experienced people who joined my company, and that has been key to growth,” she said.

“If there are more women who would like to do this kind of work, they should not be afraid or overthink it. That’s what I did. The truth is that I never believed it would grow so fast.”

But Chicago Voice & Data stands out for more than being a company in the hands of a Hispanic woman in Chicago. Being fully certified by the state and city has opened doors for the company and helped Villafuerte Berán seize opportunities.

“When the opportunity comes, we realize that we are competitive. We win contracts, not because we are a minority company, but because we know what we are doing,” she said.

«Previous Post
Toffee Peanuts Are A Healthy Way To Satisfy A Sweet Tooth»Next Post
How To Win A Nobel Prize: Lessons For Executives From Robert Mundell