How To Win A Nobel Prize: Lessons For Executives From Robert Mundell

Professor Mundell’s life suggests four lessons for the budding Nobel laureate in each of us. 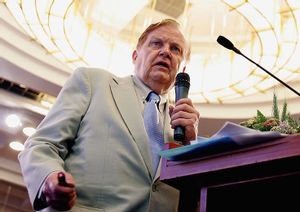 Mundell is widely considered the “father” of supply side economics and a “godfather” of the euro. (Visual China Group via Getty Images)

Robert Mundell, one of the most consequential economists of the 20th century, died earlier this year at the age of 88. Having won a Nobel Prize in 1999 for his groundbreaking work on exchange rate regimes and “optimum currency areas,” Mundell is widely considered the “father” of supply side economics and a “godfather” of the euro. But, even in death, Professor Mundell’s life suggests no fewer than four lessons for the budding Nobel laureate in each of us.

Mundell was an iconoclast. Not only that, he relished the role. “I find it quite enjoyable,” he admitted, “that people say I’m original but wrong. I’d prefer they say that to saying that I’m conventional but right.”

The professor’s work was nothing if not original. As economic historian Brian Domitrovic wrote, Mundell’s journal submissions in the 1950s and 1960s were “Zeus-like, on a wholly different plane from any in the field.” His pioneering work, in turn (and in the words of the Nobel Committee), “inspired generations of researchers.”

Underlying Mundell’s work was a rank unwillingness to adopt the simplifying assumptions long embraced by conventional economists to explain economic reality. That is, he questioned the practice—some would say the fantasy—of assuming the world consists of perfect markets, closed economies, and homogenous inputs. Stripping away those simplifying assumptions led Mundell to a very different understanding of how the world works.

It helps to be a visionary.

Professor Mundell wrote six books, edited eleven books, was a contributing author to 32 books, published 129 articles, and prepared more than six dozen conference reports, statements, and depositions for governments. The man could write. He could marshal evidence and make a persuasive case.

Although he had a reputation as “a loner,” Mundell relentlessly spread his ideas throughout academia, and into the corridors of political power, with the grace and confidence of a social butterfly. That effort led one journalist to report, years before Mundell won his Nobel, “The whole world is moving in a Mundellian direction and he’s being rediscovered by policy makers too.”

It helps to be a visionary who writes prolifically and persuasively.

Lesson #3: Academic achievement is most valuable when it leads to practical solutions.

Curiosity may kill the occasional cat, but it motivated Mundell and influenced his choice of research. As he once explained, his “choice of things to do” was influenced by his “curiosity at meeting interesting new people, looking at and trying to solve new problems, and improving &mldr; [his] own economics.”

Unlike some economists, Mundell did not live in a proverbial ivory tower—although he did, in fact, own a 16th-century “palazzo” outside Siena, Italy. But his academic work laid the intellectual foundation for what the Nobel Committee called “the theory which dominates practical policy considerations of monetary and fiscal policy in open economies.” It was the mention of the “great practical importance” of Mundell’s work that stands out in the Nobel Committee’s announcement of that year’s prize in the economic sciences.

It helps to be a visionary who writes prolifically and persuasively about solutions to practical, everyday problems.

Lesson #4: When you win a Nobel Prize, don’t take yourself too seriously. Laugh a little.

Asked in 2012 about how one should accept a Nobel Prize, Mundell reportedly replied, “The Nobel Prize is a big deal. In the academic world, it’s the ultimate prestige. My advice: Do your best to be profound—it is, after all, a roomful of profound thinkers—but don’t try too hard.”

He added, “See if you can make people laugh a little; I sang a verse from [Frank Sinatra’s] My Way, and that seemed to do the trick. And make it personal; I invited the entire room to my son’s wedding to break the ice.”

How will you accept your Nobel Prize?