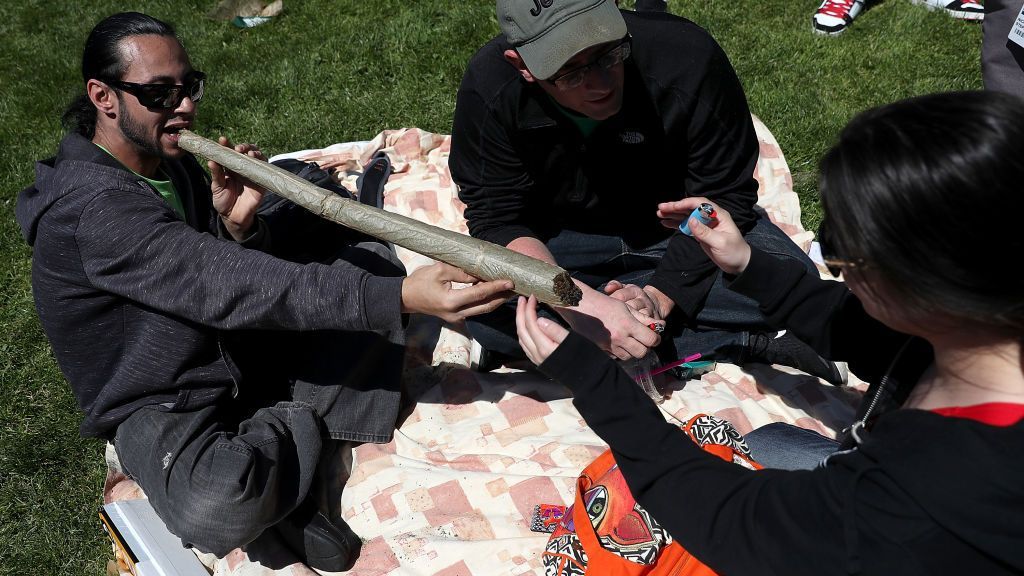 A marijuana user attempts to smoke an oversized joint on “420 Day” at a park in San Francisco on April 20, 2018, shortly after cannabis was legalized for recreational use in California. (Justin Sullivan/Getty Images)

A push by Senate Democrats to decriminalize marijuana at the federal level for the first time since it was effectively prohibited 84 years ago has little chance of succeeding, but cracks a door open for reform amid changing public opinion, experts told Zenger.

Senate Majority Leader Chuck E. Schumer (D-N.Y.), along with Sen. Cory A. Booker (D-N.J.) and Sen. Ron L. Wyden (D-Ore.) released draft legislation on July 14 to remove cannabis from the list of federally controlled substances and instead allow each state to decide its legality.

Proponents say they remain optimistic of it passing despite strong opposition from the GOP — and even from President Joseph R. Biden Jr., who has opposed legalization.

“Stranger things have happened in American history than this passing,” said Justin Strekal, political director of the National Organization for the Reform of Marijuana Laws.

Strekal’s group is one of many advocacy groups that have applauded the Cannabis Administration and Opportunity Act, which was designed to appeal to both progressive Democrats and “states rights” Republicans and is the first bill of its kind in the Senate.

In addition to removing all federal penalties on cannabis, Sen. Schumer’s bill would expunge all nonviolent marijuana-related offenses from the federal books and allow people who are currently serving time for such crimes to petition for re-sentencing. It also includes grant programs to assist those negatively affected by criminalization.

However, the bill also explicitly allows states to prohibit marijuana, and includes funding to research public health concerns held by conservatives, such as alleged links to crime.

“This is monumental,” Sen. Schumer said at a press conference last week. “At long last, we are taking steps in the Senate to right the wrongs of the failed War on Drugs.”

However, the Democrats, who introduced and successfully passed similar legislation in the House last year, are sure to face an uphill battle in passing the bill through the Senate.

Given the makeup of the chamber, Sen. Schumer, who pledged to make headway on the issue this term, would need to win all his 49 party colleagues as well as a further 10 Republicans to pass a 60-vote threshold when the bill is formally introduced in September.

That presents a huge challenge.

Republican voters are still far more wary than Democrats about marijuana legalization, even if the number of supporters has been steadily growing over the years.

In fact, 87 percent of adults who identify as Republican or Republican-leaning independents say either that cannabis should be legal for recreational and medical use (47 percent) or should be permitted only for medical purposes (a further 40 percent), according to a 2021 Pew Research poll.

Divides still exist within the GOP, though, with only 39 percent of “conservative” Republicans supporting legal recreational and medical marijuana compared to 60 percent of “moderate” or “liberal” Republicans. Additionally, while 63 percent of GOP voters aged 18 to 29 favor legalizing cannabis for either use, only 27 percent of those 65 or older agree.

Still, even while Republican voters are starting to come around to the idea, GOP lawmakers have been slower to get on board. No Republican senators have endorsed Sen. Schumer’s proposal, even though a few have in the past indicated support for easing restrictions.

Sen. Cory S. Gardner (R-Colo.), for instance, was elected to Congress in 2014, in the same year that his state’s recreational marijuana industry was launched. Since then, he has been one of the largest conservative champions of cannabis on Capitol Hill, introducing several bills to ease restrictions and even convincing Trump not to meddle with legal states.

Sen. Rand Paul (R-Ky.) is another potential affirmative vote, as he has long advocated for marijuana reform, including cosponsoring the STATES Act, which aimed to let states craft their own cannabis policies, much like the Democratic Party’s bill now aims to do.

Others like Sens. Lisa A. Murkowski (R-Alaska) and Kevin J. Cramer (R-N.D.) have also in the past indicated an openness to considering removing federal marijuana penalties.

Hesitation from other Republicans to embrace the issue is two-fold, according to Trevor Burrus, a senior research fellow for constitutional studies at the libertarian Cato Institute.

“Some Republicans from southern states in particular could fear a backlash from voting for this bill. But it’s only really in the South that marijuana legalization on the federal level or on a state level is at all controversial or even unpopular,” Burrus told Zenger.

Of the 18 states that have legalized cannabis for both recreational and medical uses, only three are represented by at least one Republican senator — Alaska, Montana and Maine.

Voters in South Dakota also approved a legalization measure in November that is now held up before the courts. If it stands, its two GOP senators — Senate Minority Whip John R. Thune and Sen. Mike Rounds — would represent legal markets, too.

Burrus said this calculus should, on its face, make the bill seem almost passable.

“And so the question is, are ten Republican senators from the northeast or the northwest or the Midwest … going to really suffer electoral backlash from this?” he said. “How much can they really suffer electoral consequences from voting for marijuana legalization on a federal level when it does not mean that they’re voting for legalization on a state level?”

But a preference by legislators in Washington to “play it safe” by avoiding action where it’s not seen as absolutely necessary could still hold many back from voting, he added.

“You hope that the behavior of the legislator and the behavior of your electorate somewhat mirror each other, but I think that mostly it’s been that politicians in D.C. will not take a vote … if they don’t feel like they have to, on almost anything,” Burrus said.

“The question here is whether or not that equilibrium will change and some Republican senators might feel like they will have to take a vote.”

Even if GOP support is forthcoming, though, it faces a challenge from Democrats, too.

A handful of Senate Democrats have opposed legalization, such as Sen. Jeanne Shaheen (D-N.H.) and Sen. Jon Tester (D-Mont.), and would be unlikely to back this latest measure.

“We do not foresee it passing the Senate,” said Colton Grace, a representative for Smart Approaches to Marijuana, an anti-legalization group. “There have already been no less than six Democrats express their unwillingness to legalize marijuana, and Sen. Schumer needs every single Democrat plus at least ten Republicans to sign on this bill in order for it to pass. Knowing this, it’s not even a matter of getting Republicans on board.”

“Underscoring even further the point that legalization is not universally accepted among Democrats, President Biden has repeatedly made it clear he is not in support of this effort.”

It is unclear whether Biden would sign the bill into law if it ever passed Congress.

Even though he has come out in support of decriminalization, Biden remains a marijuana-legalization skeptic. White House press secretary Jen Psaki recently said she had not discussed with the president the latest proposed legislation from Sen. Schumer, which ultimately leaves the question of cannabis legalization up to each individual states.

In any case, with the 2022 midterms, and the GOP vying to win back Congress, around the corner, the legislation is going to struggle to get onto Biden’s desk in the first place.

The Biden administration has touted a series of major wins since the president took office in January, which have included reaching a deal with Republicans on an infrastructure package and signing into law a bipartisan coronavirus economic relief package. Republicans concerned about reelection and winning back power will be unwilling to hand the Democrats a legislative victory ahead of the midterms, Burrus noted.

“The other factor here is of course whether or not the overriding goal is to prevent Biden from having any wins before the midterm elections,” he said. “So, that could be what McConnell is telling the senators in the backroom, like, ‘Don’t give this to Biden. We’re going to take the Senate in 2022, and then we can do a compromise or wait until 2024.’”

“That kind of electoral calculus is always important,” he said.