Suspect demanded to be taken to Hawaii before he was seized by the Gulfstream crew. 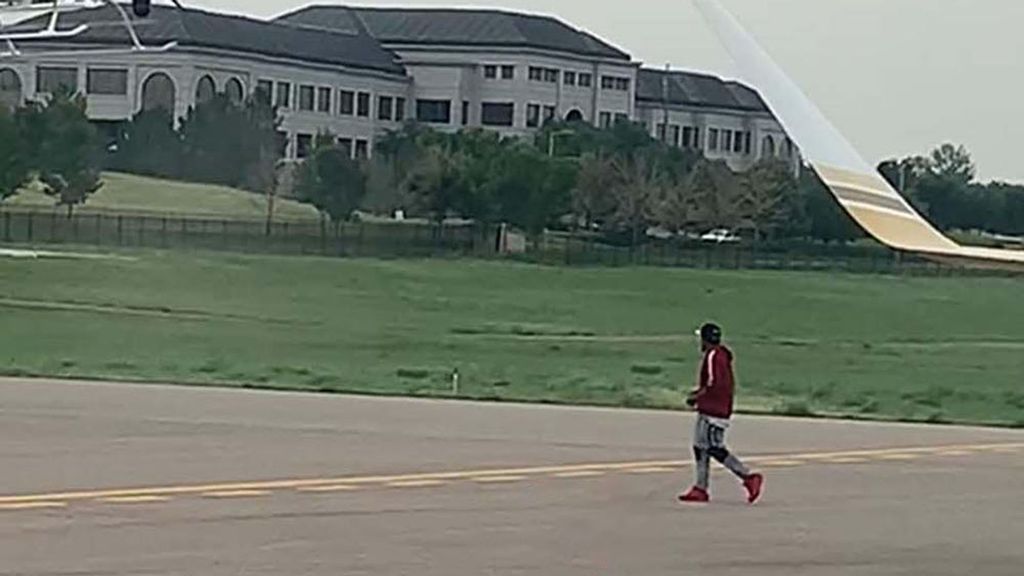 Sterlin Love is accused of hopping the fence at Centennial Airport in Colorado and approaching a jet on the runway. (@DouglasCountySheriff/Zenger)

Photos released by police near Denver show a man trying to steal an airplane so he could fly to Hawaii for vacation.

The suspect was identified as Sterlin Love from Colorado Springs, Colo. He’s accused of hopping a fence and accessing a runway at Centennial Airport in the suburb of Englewood and attempting to board a Gulfstream jet while it was taxiing.

The aircraft’s crew did not let him in.

Love intended to take the jet to Hawaii, according to the Douglas County Sheriff’s Office. It’s unknown if he has had any pilot training.

“Today’s Note to Self: Life is not a video game,” the sheriff’s department wrote on Twitter. “Jumping a fence at Centennial airport in a effort to steal a jet and fly to Hawaii will not go well.”

The tweet came with photos. In one, a man is pictured standing near the front of a small jet. In the other, a Denver Police Department helicopter is shown hovering about the tarmac, squaring off against Love.

The chopper was already at the airport for an unrelated reason, according to Denver Police.

Love, 31, faces charges of first-degree aggravated theft of a motor vehicle worth more than $100,000, a felony, and second-degree misdemeanor criminal trespass. He is being held on a $10,000 bond.

“We’ve all been at the point where we needed a vacation, but this took it a little far,” the sheriff’s department wrote on Facebook.

Hijackings have steadily declined due to increased security measures following the Sept. 11, 2001, attacks in the United States. Since then, the number of aircraft hijackings globally per year has ranged from zero to 11. The peak was 86 hijackings in 1969.

The first U.S. aircraft hijacking was recorded in 1961 when a National Airlines plane from Miami to Key West was diverted to Cuba.

There have been three confirmed aviation hijackings worldwide this year, according to the Flight Safety Foundation.

Jaden Lake-Kameroff, 18, grabbed the flight controls of a Ryanair Cessna 208 Caravan transporting six people on Jul. 7. The flight was scheduled to approach Aniak Airport in southwestern Alaska when Lake-Kameroff asked the pilot if he could try to fly the aircraft or sit in the co-pilot chair.

The pilot refused, but the teen grabbed the yoke and sent the plane into a nosedive.

Passengers restrained Lake-Kameroff as the pilot regained control of the aircraft. No injuries were reported, but it was an attempted murder-suicide, according to Alaska State Troopers. Lake-Kameroff was charged with multiple counts of assault and terroristic threats.