Frog In Your Throat? New Species’ Tadpoles Live Inside A Meat-Eating Plant

Scientists say the rainforest plant ignores the offspring and lives on their poop instead. 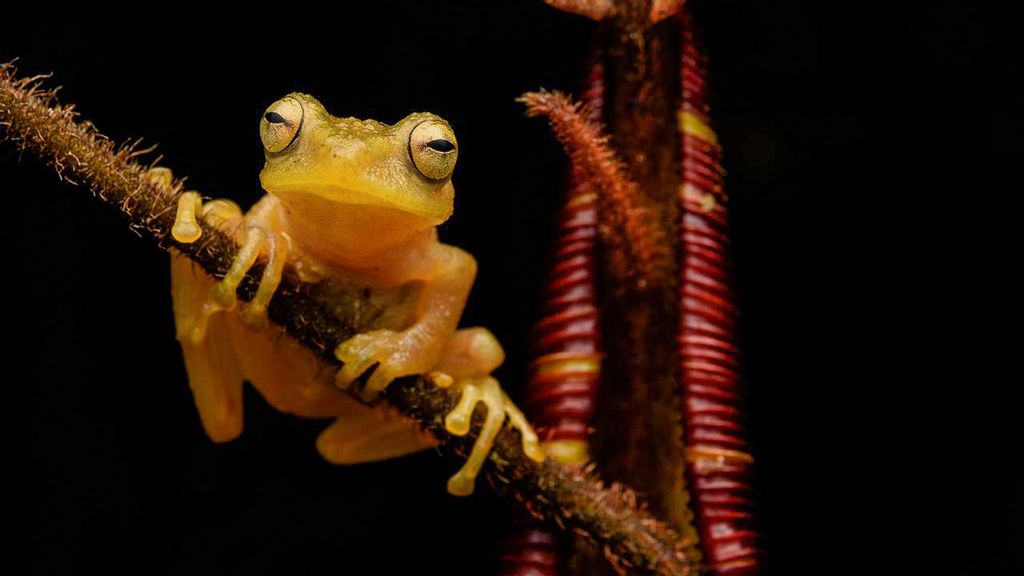 The pitcher plant frog that was discovered in the rainforests of Borneo. (Naturhistorisches Museum Bern, Chien Lee/Zenger)

A new species of frog lays its tadpoles inside a carnivorous plant, which then feeds on the tadpole droppings.

The species, named Philautus nepenthophilus, was recently discovered by an international team of scientists.

The tropical creature measures between 0.98 and 1.18 inches and is one of the world’s smallest frogs. It was believed to be extinct but has remnant populations.

The research team led by Stefan Hertwig from the Natural History Museum of Bern (NMBE) in Switzerland found several specimens of the pitcher frog in the tropical rainforests of Borneo in the Malay Archipelago.

Borneo’s tropical rainforests are a floral and faunal biodiversity hotspot, where scientists often discover and describe new species in a race against the rapid destruction of natural habitats.

Hertwig, who is also curator of the Herpetology Department at NMBE, collaborated with researchers from the University of Bern, the University Malaysia Sarawak and the Center of Natural History in Germany when they encountered the specimen during three expeditions.

The researchers found that the males usually sit on the pitchers overnight and emit loud sounds to entice the females to mate.

The small amphibian then uses the carnivorous pitcher plants as a nursery for its offspring, which are hatched from unusually large eggs that females lay inside the plant’s liquid.

The scientists at NMBE say that hatched tadpoles also complete their development inside the plant, where they feed exclusively from the plant’s inner nutrient supply, which is why they have such a tiny mouth and no teeth.

This benefits both the plant and frog, as the tadpoles’ droppings provide the plant with nutrients, while the plants offer an exclusive, sheltered space for the tadpoles to develop. Their symbiotic relationship is of extreme importance for survival, according to the scientist, because of the nutrient and water shortage in their surroundings.

The frog was discovered near a small settlement in the Pulong Tau National Park in the Malaysian state of Sarawak on the island of Borneo in an almost inaccessible and densely vegetated rainforest at about 6,900 feet above sea level.

The small pitcher frog was classified within the family of Rhacophoridae, which includes creatures that are commonly known as shrub frogs. They belong to 431 species that reside in tropical areas in Africa and Asia.

The world’s smallest frog, measuring 0.38 inches for males and 0.39 inches for females, was found in Alejandro de Humboldt National Park in Cuba in 1993.

Frogs in Borneo are under threat mostly due to deforestation and illegal wildlife trade, but climate change also poses a danger.

“With two degrees of warming, Borneo’s rich biodiversity in marine, reptile, and amphibian species will be severely affected, and potentially devastated by any warming beyond this level by 2050,“ according to Panda, an international NGO.