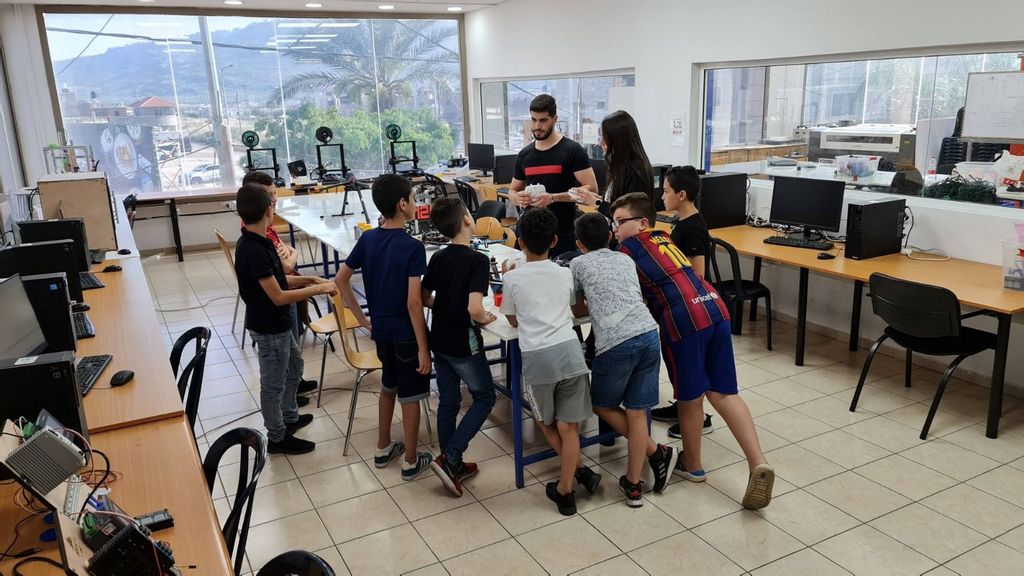 Moona — a Space for Change began in September 2014 as an extracurricular program where Jewish and Arab Israeli high-school students get acquainted while learning technologies related to space exploration: robotics, drones, 3D printing and electronics.

Since then, Moona has expanded and added advanced vision and Internet of Things, or IoT, technologies to the curriculum, plus job-specific training for young adults in coordination with high-tech businesses looking to hire.

“Moona” means “wish” in Arabic. In Hebrew, “emoona” means “faith.” The name also reflects an ambition to “shoot for the moon” literally and figuratively.

Asaf Brimer spent 25 years in the Israeli Air Force and aerospace sector before establishing Moona with a Muslim partner.

“I started it because the separation in our society is the biggest challenge for Israel, and I decided that my children will be better off if society is more open,” Brimer says. “We lose a lot of advantages because we don’t have opportunities to meet each other.”

With the recent lifting of Covid restrictions in Israel, once again 50 to 100 Jewish, Muslim, Christian, Druze and Bedouin Israelis started coming to each site for activities every weekday.

Following the 11-day conflict with Gaza in May, and racial unrest in cities including Akko, Moona brought in psychologists to help the students process their emotions, and then got back to the business of science.

“Everything is more challenging now, but there are more opportunities, too,” Brimer said.

“In two years, I believe we’ll have six to 10 centers in Israel. Eventually, I hope there will be Moona centers in the U.S. and UAE. It’s a model that can be copied anywhere because it’s about people.”

In 2017, the three top winners of Moona’s “From Idea to Implementation” competition — supported by the U.S. Embassy Middle East Partnership Initiative — brought their prototypes to the Jewish Federation of Greater Pittsburgh’s Partnership2Gether program, which provided seed money to Moona.

Ahmad Sbea, 17, and Khaled Abu Daud, 18, both from Majd al-Krum, shared first prize for their automatic fishing boat designed for the safety of Alaskan fishermen. Third prize went to Rima Ali, 21, from a Druze village near Haifa, for her entertainment table loaded with board and card games.

Before coming to Moona in ninth grade, he didn’t socialize with Jews, Abu Daud told the Pittsburgh Jewish Chronicle at the time. “The first year I was really shy. But after that … I started to get more and more involved. … Now I am friends with all the mentors and the Jews there. It’s really different from what happens on the outside,” he said.

Sbea followed his friend Abu Daud to Moona’s robotics program. Now a 21-year-old student at the Technion-Israel Institute of Technology (often called “the MIT of Israel”), Sbea said he struggled at first to communicate with Hebrew-speaking peers and mentors, but he learned quickly and became passionate about engineering.

“We say that Moona is a space for change, and it was true for me,” Sbea says.

“I had planned to be in medicine, but after three years in Moona, I wanted to be a mechanical engineer. All of my five younger brothers are now in Moona.” He still participates as a mentor.

Sbea led his drone-building team to a first-place win in 2019’s Moona competition. They took the quadcopters they had developed to Boston, with a stop at MIT, hosted by the Israeli American Council Boston.

“In Moona, we learn topics and then teach them to new members. I liked that concept of being a student and also a teacher,” says Sbea.

More recently, Abu Daud and Sbea were on a team that won first prize in a Technion-sponsored hackathon to find innovative Covid solutions. They invented a new type of facemask with students from Stanford University.

Last year, Moona developed a new model for training manpower for industries in the area, Brimer said. “There was a crisis after corona, with many people looking for jobs and many organizations were helping with training. We felt the real solution is on the municipal or regional level.”

The six- to eight-week courses in applied engineering are funded by the business, government, philanthropic and private sectors.

“We run courses at three centers in different parts of the country, including for the Bedouin population in the South. We’re also looking to open in Jaffa,” says Brimer.

The subjects are targeted to actual industry needs, for example, in renewable energy and additive manufacturing. Partner corporations, such as Intel and Qualcomm, provide mentoring and internship opportunities.

Where Arab And Jewish Teens Learn Tech Skills Together appeared first on Israel21C.