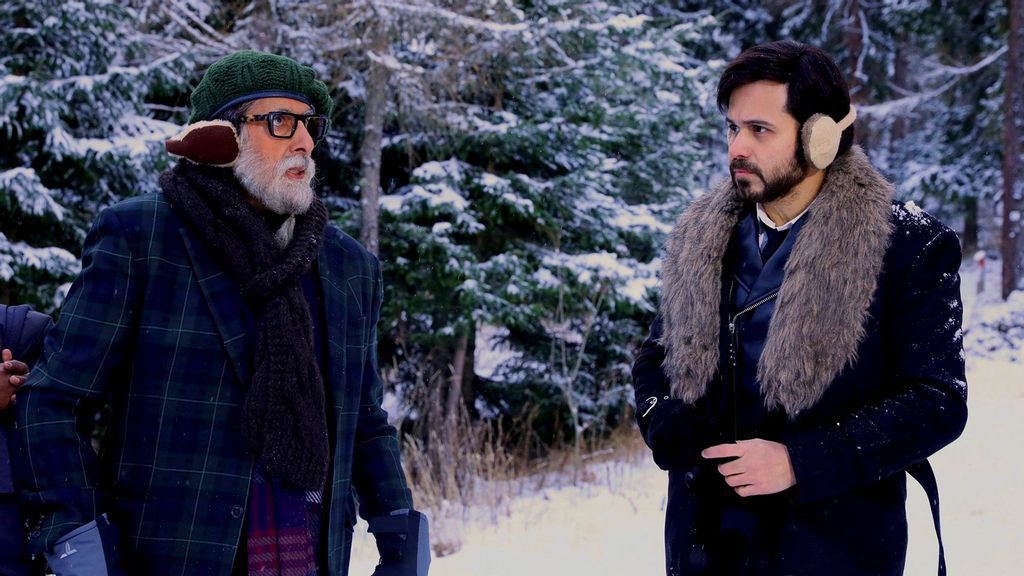 MUMBAI, India — Ever since the first look of Amitabh Bachchan was released from the upcoming film “Chehre,” viewers have been raving about it. The anticipation for the film has been building up, and when the teaser and the film’s trailer were shared a few months back, everyone’s curiosity was piqued further.

As the restrictions on shooting have been lifted again, the team of “Chehre” is getting back on the sets to make sure that the audience gets their dose of entertainment with this film very soon.

The makers of the mystery thriller film, which is directed by Rumi Jaffery and stars Emraan Hashmi along with Big B, have resumed the final leg of the movie.

Big B is back in action to shoot for the video of the title track in Mumbai. The video is being directed by Kookie Gulati, who last helmed the Abhishek Bachchan-starrer “Big Bull.”

Senior Bachchan has recited a poem written by Jaffery for the title track and is put to tune by Shekhar Ravjianii of Vishal-Shekhar, with 107 musicians of Prague.

Anand Pandit, the film producer, said that while maintaining safety protocols, the film has been shot and made for the audience to enjoy.

“This film is extremely special to all of us,” he said.

“We have poured our hearts into it. It is an exciting movie, and we have been waiting for over a year to bring it to the big screen for the audience to enjoy.”

“We want to make sure that the experience has everything, and that is why this title track video is so important. I am glad that we can shoot with Bachchan Ji again for it.”

“We have maintained all safety protocols and are working on making this a memorable shooting experience for all.”

“Chehre” will feature Bachchan and Hashmi sharing screen space for the first time. While Big B plays the role of a lawyer, Hashmi is a business tycoon in the film. The two play a game of “facade” to uncover the truth.

Along with “Chehre,” Bachchan has a lot of upcoming projects in the pipeline. He is currently working on “Jhund” and “Mayday.”

Bachchan also announced that he would be seen in the Hindi remake of the Hollywood film “The Intern,” which starred Anne Hathaway and Robert De Niro. He will be acting opposite actress Deepika Padukone. He has replaced the late actor Rishi Kapoor who was earlier supposed to play this role.

He is also working on Vikas Bahl’s directorial movie “Goodbye” alongside actors Neena Gupta, Rashmika Mandanna, Pavail Gulati, and Elli Avram. The team recently completed the first schedule for the film. “Goodbye” is produced by Reliance Entertainment and Balaji Telefilms.