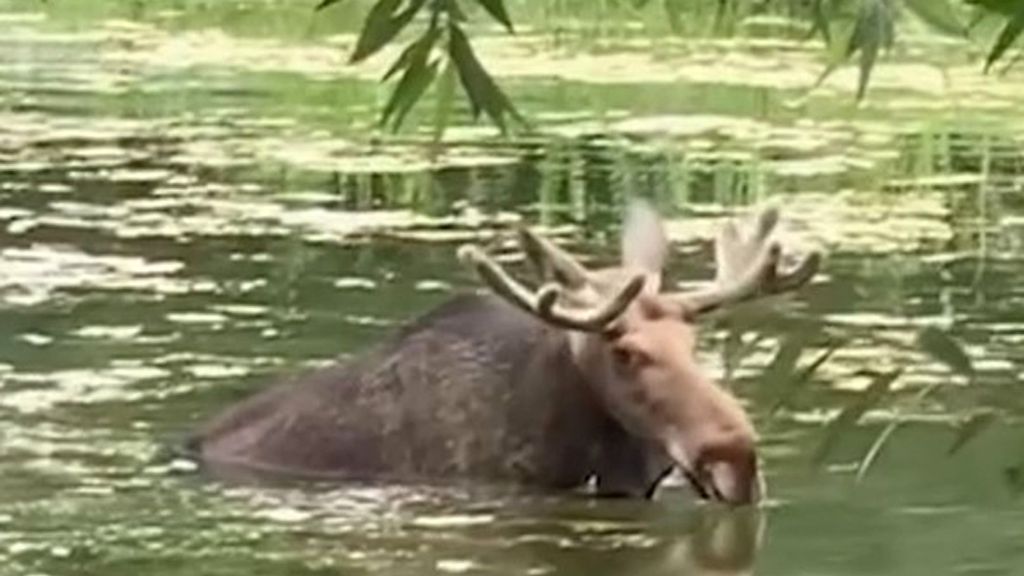 A moose was spotted swimming in a pond in Sokolniki Park in Moscow, Russia on July 11. (@ksenechka_zhu/Zenger)

A large moose enjoyed a cool dip in a park pond in Moscow for the second day in a row.

The incident was filmed at Sokolniki Park near the center of the Russian capital Moscow during a heatwave last week.

As the capital city basks in summer sunshine, a moose was spotted taking a dip in the pond, surprising local residents and tourists.

The animal calmly stood in the pond to cool down before swimming around, astonishing park visitors.

Park-goers were even more surprised when the moose showed up the following day, enjoyed another dip in the pond, and then casually walked past open-mouthed visitors to disappear into the woodland when fully refreshed.

Footage of the moose’s second trip to the pond was widely shared on social media.

In the videos, the large animal is seen enjoying a swim in the cool water as park-goers watch and film from the banks and pathways.

When the moose is feeling refreshed, it casually walks past residents sunbathing on the grass bank and disappears into the overgrowth.

“Not even a day has passed and Moosie is back swimming again,” wrote one eyewitness on social media.

The local authorities reminded Moscow residents that temperatures are expected to reach highs of 35 degrees Celsius (95 F), so it is likely the moose will return for another swim when it gets too hot.

According to Russia’s meteorological service, Moscow set a new record for the hottest day in June when temperatures reached 34.8 C (nearly 95 F) on June 23, beating the previous June record from 1901 by 0.1 degrees Celsius.

Moose prefer colder climates, and only live in areas with seasonal snow cover. They cannot sweat, and produce large amounts of heat through the fermentation in their digestive system, according to Animal Diversity Web, a database from the University of Michigan’s Museum of Zoology.

This means the animals cannot withstand temperatures above 27 C (about 80 F) for long.

While moose are more commonly viewed as land creatures, they are also strong swimmers. Moose have been seen swimming several miles at a time, and can stay completely submerged for 30 seconds or more.

As moose are herbivores, their diets consist primarily of twigs, trees and shrubs. Adult moose typically require around 44 pounds of food per day.

When the ice melts, the animals are often seen swimming in lakes and rivers to feed on aquatic plants.