Washington, D.C.’s Capitol Police are opening Florida and California offices. It’s led to concerns about oversight of the agency. 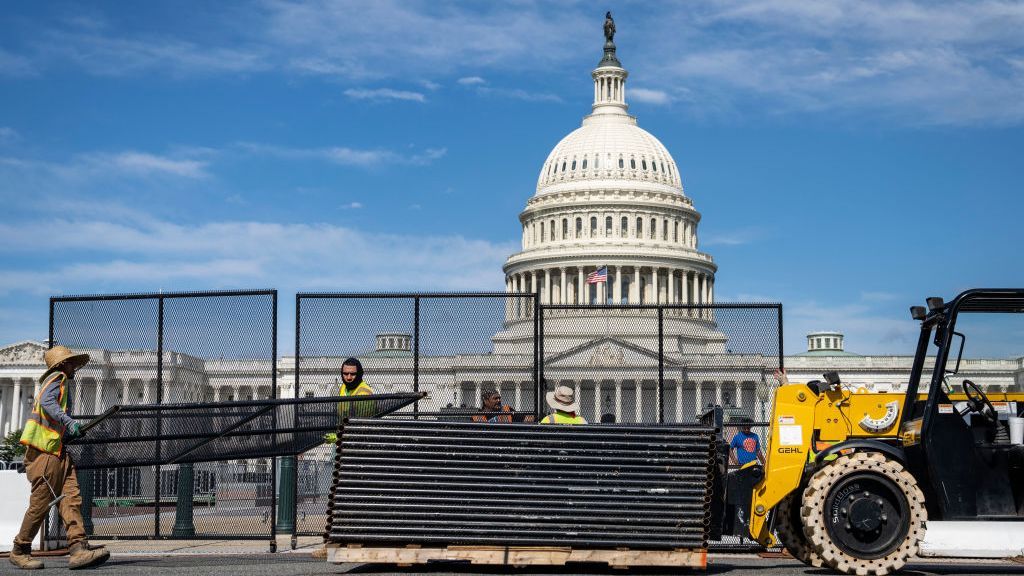 Workers remove security fencing surrounding the U.S. Capitol in Washington, D.C., on July 10. The security fence was erected in the wake of the Jan. 6 riots. (Drew Angerer/Getty Images)

More than six months after a day of deadly U.S. Capitol riots, the identity of the officer who shot and killed rioter Ashli Babbit is still unknown. It’s unusual, according to experts, for an officer involved in a shooting to remain anonymous for so long. But it’s also not the only information the U.S. Capitol Police isn’t willing — or required — to tell the public.

Watchdog groups worry that a lack of transparency will follow the Capitol Police in its recently announced expansion beyond Washington, D.C. The department, whose mandate is to protect the Capitol and the surrounding campus of office buildings, revealed this month that it will open offices in California and Florida, with the possibility of more locations in the future.

Since the unique police force is an agency of Congress, it’s not required to respond to Freedom of Information Act requests. That means it’s up to the agency whether it reveals anything about arrests, public complaints, reports from inspectors general, procedures and policies, its own staff, and how it spends its yearly budget of over $500 million.

The 2,000-strong force is the “least transparent federal agency” Daniel Schuman says he has ever seen. Schuman is policy director at Demand Progress, a Washington-based think tank that advocates for progressive policies. He said his organization had spent years researching Capitol Police before Jan. 6, and that he was concerned about the plans for satellite offices outside its immediate jurisdiction.

“Because they are a legislative branch agency, they are not under a legal requirement to disclose most of their documents, and they do not do so,” Schuman told Zenger, adding that he questioned what oversight would be in place for the Capitol Police state offices. “How do you oversee what’s happening at those offices? How do you know it’s not a boondoggle?” he asked.

“You don’t have the same kind of protections that you would ordinarily expect in a police agency,” added Jonathan Smith, executive director of the Washington Lawyers’ Committee for Civil Rights and Urban Affairs, which monitors complaints about law enforcement.

It’s not only watchdog groups that have expressed concerns about the agency.

After the Jan. 6 riots, the agency did not hold any press conferences or immediately release an inspector general report about the day. Reps. Tim Ryan (D-Ohio) and Jaime Herrera Beutler (R-Wash.) expressed “frustration with [the Capitol Police’s] unwillingness to release information to the public or answer media questions” about the riots.

The agency has faced other controversies involving its pattern of official silence.

Miriam Carey, a dental hygienist, was shot to death by Capitol Police and Secret Service officers in 2013, while she sat in her car with her 13-month-old daughter. Carey had led police on a chase near the Capitol. The Justice Department never released the findings of an investigation.

According to the department’s self-reported data from 2018 to 2020, half of 745 recorded incidents involving officers were traffic stops and 14.2 percent were drug-related. These incidents often occurred outside the Capitol campus, including at nearby Union Station, the city’s rail terminal.

It’s that kind of mission creep that Smith says he finds troubling.

“We know they don’t stay within their lane,” said Smith. He believes Capitol Police based in California and Florida will have no practical constraints and could target groups other than the rioters who were loyal to former President Donald Trump.

“You can easily see them start to surveil anyone that’s got a political axe to grind against the government,” he said, noting it could include unrelated groups like Black Lives Matter. “Things that have nothing to do with the Capitol might get caught up in those kinds of investigations.”

A House subcommittee on legislative branch appropriations passed a $4.8 billion bill last month that would boost the Capitol Police’s budget to $603.9 million in fiscal year 2022.

The Democrat-controlled House passed a $1.9 billion supplemental funding package in May to provide emergency funds to the Capitol Police, after expenses and overtime related to Jan. 6 strained its budget.

Even some Democrats expressed discontent at the rapid expansion of the agency.

“Increasing law enforcement funds does not inherently protect or safeguard the Capitol Hill or surrounding D.C. community,” said Reps. Ilhan Omar (D-Minn.), Cori Bush (D-Mo.) and Ayanna Pressley (D-Mass.) after voting against supplemental funding, which is now before the Senate.

The Defense Department has approved a request by the Capitol Police for military equipment designed to surveil the public and store high-definition video. The “Persistent Surveillance Systems” units and their technology could remain in Washington, or they could be deployed in other states. Capitol Police are not required to tell the public.

U.S. Capitol Police did not respond to repeated requests from Zenger for comment.

Tim Barber, an agency spokesman, has said in media interviews that he imagines his department operating more like the Secret Service, with a nationwide reach.

Carl Takei, senior staff attorney with the American Civil Liberties Union’s Trone Center for Justice and Equality said a broader mandate for Capitol Police is unnecessary, since the FBI and other federal agencies already have a well-developed nationwide presence and the power to investigate threats against officials.

“This unnecessary expansion follows the same pattern as other major law enforcement failures, in which the response of elected officials is often to write a blank check to the agency without assurances that the additional money or expanded agency role is actually necessary,” Takei said, “and without any meaningful safeguards or consideration of who might be harmed by a law enforcement agency expanding its mandate and presence.”