The Tsirkon missile, fired from a warship in the White Sea, reportedly can reach Mach 7. 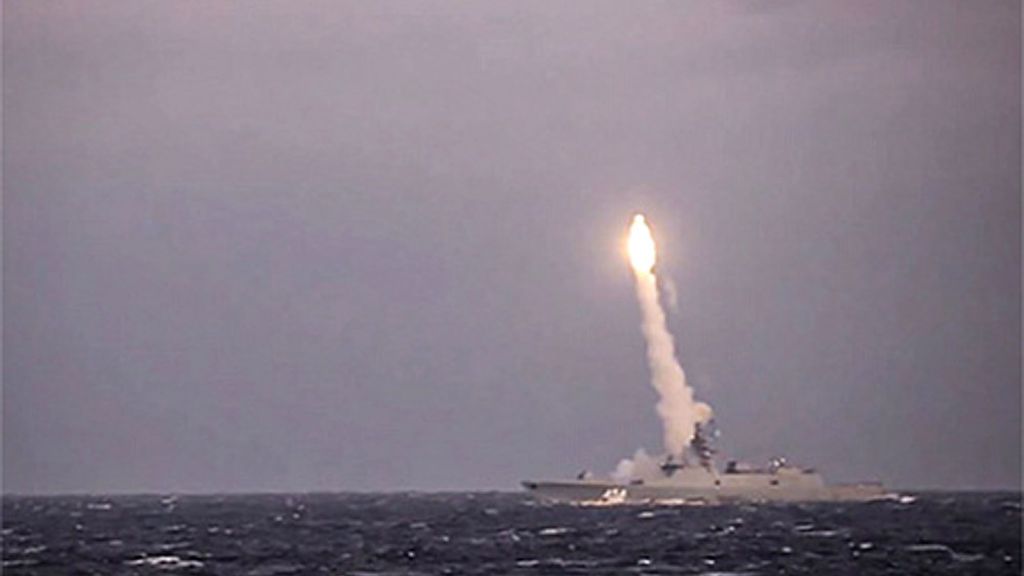 The first launch of the Tsirkon hypersonic missile from the Admiral Gorshkov warship in the White Sea on Oct. 6, 2020. (Russian Ministry of Defense/Zenger)

Russia’s new Tsirkon (Zircon) hypersonic cruise missile — which can travel seven times faster than the speed of sound — was successfully tested from a battleship as the superpower announced a new series of tests set to start next month.

The Tsirkon hypersonic cruise missile has been in development for years but now seems poised to be deployed to military vessels.

The missile was fired from the Admiral Gorshkov warship in the White Sea. The Tsirkon missile can reach Mach 7 or 5,370 mph, Russia says.

“The Tsirkon missile successfully hit a target directly at a range of over 350 kilometers (217 miles). The flight speed reached nearly Mach 7,” Russia’s Defense Ministry said in a statement. Hypersonic speeds are defined as anything beyond Mach 5.

“The tactical and technical characteristics of the Tsirkon missile were confirmed during the tests,” the ministry said.

Russia plans to fit the Tsirkon missile system to its submarines and surface ships.

In the meantime, the Admiral Gorshkov from the Northern Fleet will test-fire the Tsirkon from a surface position, with the goal of hitting a fixed target. Then, in the second half of August, the Severodvinsk nuclear submarine will test-fire the missile.

The tests had been scheduled for May or June but were postponed. Russia said that between October and December 2020 it had successfully carried out various tests.

Russia’s missiles are considered to be the next step in the arms race, with no defense systems currently able to stop them. China is the acknowledged leader in developing hypersonic cruise missiles. Other countries pursuing such systems are India, Japan, South Korea and Australia.

President Vladimir Putin in 2011 promised to develop a hypersonic missile system for the Navy, with the first flight tests beginning in 2015.

In 2019, Putin announced that the missile is capable of hitting a ground target at a distance of over 1,000 kilometers (621 miles).

Russian media says the Tsirkon is the “world’s first hypersonic cruise missile capable of carrying out a long aerodynamic flight with maneuvering in dense layers of the atmosphere, using its own engine thrust throughout the route.”

Russian analysts say that the hypersonic missiles will provide Russia with a significant advantage over NATO air defense systems.

“The Lockheed Martin-made ARRW is to be the USAF’s first operational hypersonic missile, with initial operational capability planned for the fiscal year 2022,” according to aerospace publisher FlightGlobal.

Tests earlier in the year were unsuccessful. The U.S. Department of Defense plans to modernize its hypersonic weapons systems over the next decade.

“We’re really proud to be in the hypersonics weapon enterprise at this point in this exciting time, and we’re just on the cusp of an operational capability,” said Brig. Gen. Heath Collins, program executive officer for weapons and director of the Air Force Life Cycle Management Center’s armament directorate.

“Most U.S. hypersonic weapons, in contrast to those in Russia and China, are not being designed for use with a nuclear warhead. As a result, U.S. hypersonic weapons will likely require greater accuracy and will be more technically challenging to develop,“ said Kelley M. Sayler, an analyst in Advanced Technology and Global Security at the Congressional Research Service.

The U.S. Army is also developing a hypersonic weapon that can be launched from a mobile truck.