VIDEO: Millions Of Sex-Mad Mosquitoes Blot Out The Sun 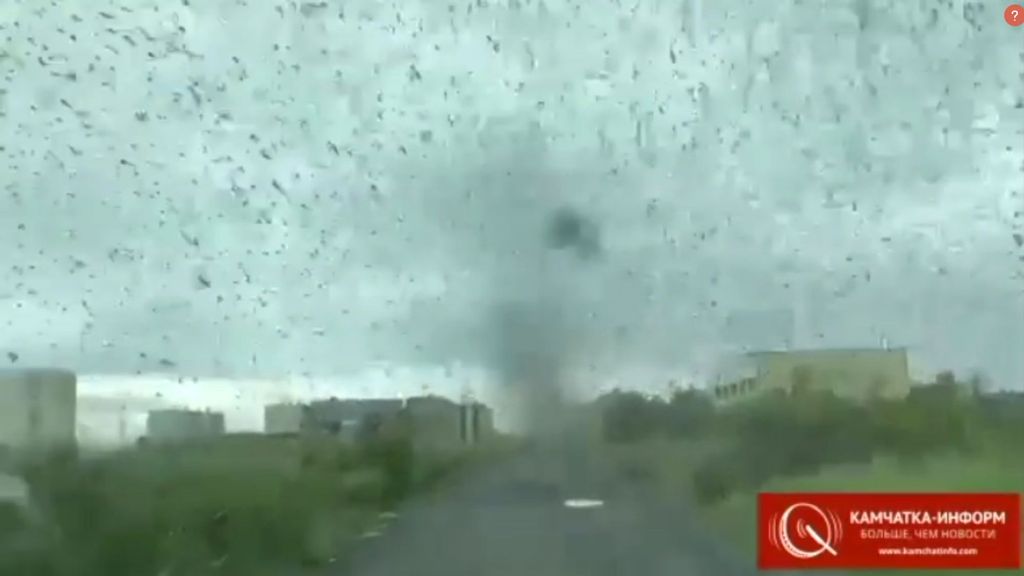 A “tornado” swarm of mosquitoes hit a village on the Kamchatka peninsula in Russia. (@kamchatinfo.ru/Zenger)

A swarm of sex-mad mosquitoes in eastern Russia grew so big this month that it morphed into a whirling twister big enough to block sunlight.

Alexei Ponomarev captured video of the phenomenon on July 17 as he drove through what he described as a “tornado” of millions of male insects searching for elusive females to mate with.

Natives of Ust-Kamchatsk, a village in the far eastern Russian region of Kamchatka Krai, see it every summer.

Ponomarev said the swarm enveloped his car for hundreds of yards, rendering him unable to see the road. He described “pillars” of insects that formed, dispersed and reassembled in the sky above him, and said he “didn’t dare” open his car windows.

Entomologist Lyudmila Lobkova reassured Russians that the enormous bug cloud is not dangerous.

“There is nothing wrong here. They are male mosquitoes that do not hunt warm-blooded animals, but circle around one or several females in order to mate,” Lobkova said.

Studies of similar insect clouds suggest the pillars form above puddles or other “swarm markers” on the ground.

The mosquito fog ritual is nothing new to locals who witness it every summer. They say the number of insects varies with weather conditions each year.

“It seems to me that there are more this year than usual,” Ponomarev said.

Ust-Kamchatsk is surrounded by tundra and swamps, making mosquitoes and midges commonplace. Residents say they have to run from building to building in the summer to avoid being bitten.

They say the pesky mosquitoes will even bite in the middle of rainstorms, undeterred by water, and that some squeeze into houses despite nets on windows and doors.

Several species of mosquitoes are native to the Kamchatsk region. Videos of the tornado swarms went viral on Russian social media last summer when unusually hot weather led to larger clouds of insects.

The “tornadoes” can prove unsettling, however, for tourists and visitors.

A 2019 study published in the journal PLOS Neglected Tropical Diseases indicated that increasing global temperatures could lead to more exposure to mosquito-borne illnesses such as dengue, yellow fever and Zika. Europe had the largest projected increases in population risk, according to the study’s authors, Sadie Ryan of the University of Florida and Colin Carlson of Georgetown University.

“Our findings support the expectation that climate change will expand and increase Aedes [mosquito]–borne viral transmission risk,” they wrote.

It’s not clear if the mosquitoes shown in the Ust-Kamchatsk video footage carry disease, though the study supports the link between warmer weather and larger swarms.